Posted on October 24, 2012 by laststandonzombieisland 5 comments

Here at LSOZI, we are going to take out every Wednesday for a look at the old steampunk navies of the 1866-1946 time period and will profile a different ship each week.

Here we see a mock up of the 1912 type US Navy battle cruiser CC-1 as mocked up by Robert Pawling.  In 1911, battlecruisers were the rage in the modern navies of the world. Great Britain had the Invincible class and was designing the HMS Hood. Japan was looking at the Kongo class. The Kaiser of Imperial Germany had the Moltke-class and looking to build the Derrflinger class.

With all of the peer pressure, the United States decided they needed a half-dozen of  their own. Original designs included ships with as many as 24 boilers to keep them fast enough (35-knots) to outrun battleships, and a heavy armament up to 10 14-inch guns to destroy anything too fast to outrun. By 1916 it had been decided to fit these monsters with powerful diesel-electric power-plants that created an amazing 130,000 kW of power. This is impressive when you consider today that the 1000+ foot USS Nimitz class super carriers of today only generate 64,000 kW of power and have to use two nuclear reactors to accomplish that feat. Eight 16-inch/50cal guns, just one fewer than those carried by the Iowa class battleships, was the final armament chosen. They would have been the most impressive six warships of their era. 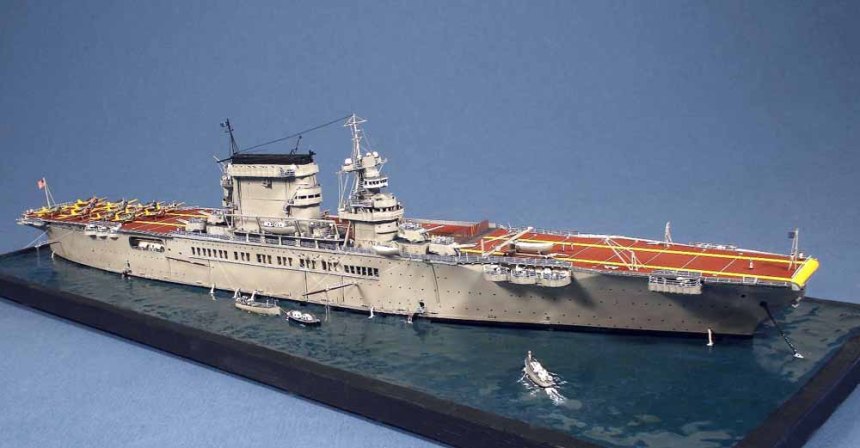 World War One ended before the battle-cruisers were laid down and only two hulls, Lexington and Saratoga, were finally started in 1921. While under construction the two were a victim of the 1922 Naval Treaty. Battle cruisers were limited but aircraft carriers were allowed. This led the two huge batttlecruisers to be redesigned as large carriers. At over 800-feet long, they were only surpassed in size by the 1945-era Midway supercarriers more than two decades later. They also carried some of the largest guns of any aircraft carrier: eight 203mm (8-inch) naval rifles…making the pair every bit as powerful as a heavy cruiser. In many ways they were ahead of their time.

Saratoga after her 1944 refit, wearing camouflage measure 32 design 11A. Her 8 8-inch guns had been replaced by 16 5-inch guns and 60 40mm Bofors and– giving her the same equivalent AAA firepower of almost five destroyers.

The Lexington and Saratoga were commissioned in 1927 and for most of the pre-WWII era were the primary training and development carriers of the US fleet (the Yorktown class didn’t appear until 1937). During WWII the Lexington was lost in the Battle of the Coral Sea. The Sara won seven battle-stars, had a lifetime total of 98,549 aircraft landings in 17 years and was finally sunk in 1946 as a target for the Atom bomb tests at Bikini Atoll, where she is a popular dive destination.