Posted on December 16, 2016 by laststandonzombieisland 3 comments

I really dig old military arms of all sorts, ever since I was a kid. I guess you can say I am just a big, 42-year old kid these days.

One of my latest edged weapons is a Nepalese Gurkha Kukri Bhojpure Fighting Knife that I bought to go with my semi-cleaned Nepalese 1878 Martini-Henry Francotte pattern short-lever rifle and bayonet as created by Gen. Gahendra Rana’s cottage gun smiths in the 1880s (more on that here.)

Like the Francotte and its bayonet, the $89 Bhojpure Kukri, came from IMA’s 2003 purchase of the Royal Nepalese Arsenal, which was located at the palace of Lagan Silekhana in Katmandu.

As spears and the Kora sword were being replaced by firearms, the kukri was the weapon of choice for hand-to-hand combat.

The Bhojpure region kukri was typically produced at the turn of the 19th century and after. This style is a somewhat down scaled version of the Victorian Long Leaf kukri. It appears these saw service from the 1880s through the first quarter of the 20th century when they were withdrawn from service and placed in arsenal storage. With that in mind, the blade is anywhere from 90-130 years young and has spent most of that time “on the shelf.”

It came covered in… who the frack knows what. Pureed leaves, cosmoline, dirt, tar, yak grease I don’t know. It was horrible. Of course, it was as to be expected though, as it has been in arsenal storage for probably a century, and the Francotte came similarly dressed. 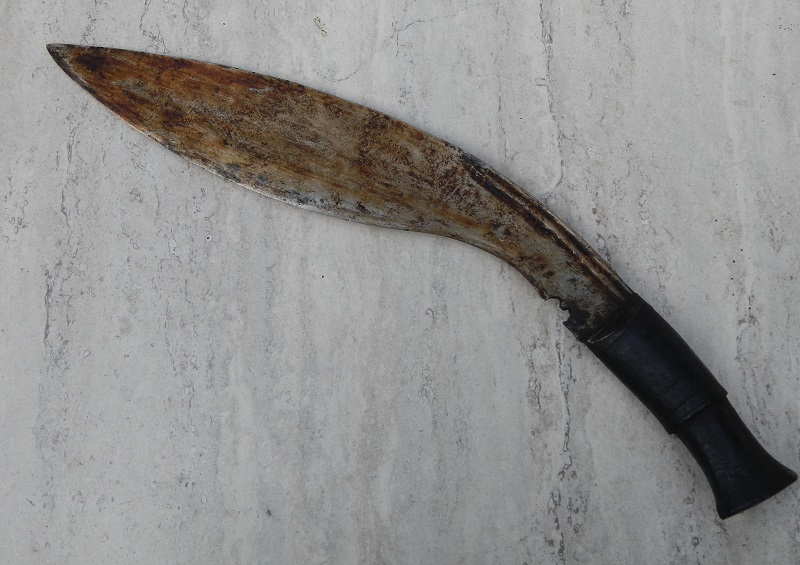 Cleaned via Ballistol and elbow grease, it is very nice, measuring out to just a hair over 17 inches overall with 13 of that being a rat-tailed steel blade almost as thick as my pinkie finger (around 3/8″) at its fullest point. This kukri was handmade; the steel was smelted, forged, shaped and hammered in Nepal by individual Kami blacksmiths. As such it is very dirty impure century-old steel that is kind of soft when compared to modern steels.

Check out how thick this beast is when compared next to the same length of modern Ontario 6420 OKC Kukri which uses 1095 carbon steel.

It’s also rather sharp and has seen a good bit of service, but the wood, though dark, is solid.

What is the blade notch for? Some say its to represent the god Shiva, which doesn’t make sense because the Kora– a Nepalese sword of the same period– doesn’t have the same notch. Some say it is for capturing an enemy blade in a knife fight, or as a “blood notch” which is even goofier. I think that it is meant to be a tool notch of some sort (to be used, for example, in removing nails, etc) as the kukri is something of the multitool for the Nepalese of all working castes.

I also have a set of chakmak and karda blades; a sharpening tool and small secondary knife usually stored in the sheath of the kukri. They have a great patina on them as they did not get the yak butter treatment so I will keep them as is.

Here is the cleaned Bhojpure compared with my much more modern Ontario Kukri in an ode to the Brigade of Gurkhas cap badge.

I still would like to buff out the blade with Flitz, strip and refinish the handle with boiled linseed, and maybe touch up the edge a bit. Overall, I think the old soldier has a lot of life left in him.

This is what I think I look like with it:

But this is probably closer to the truth:

British Home Guard display an array of close-combat weaponry at a training session, 1942. including kukri.