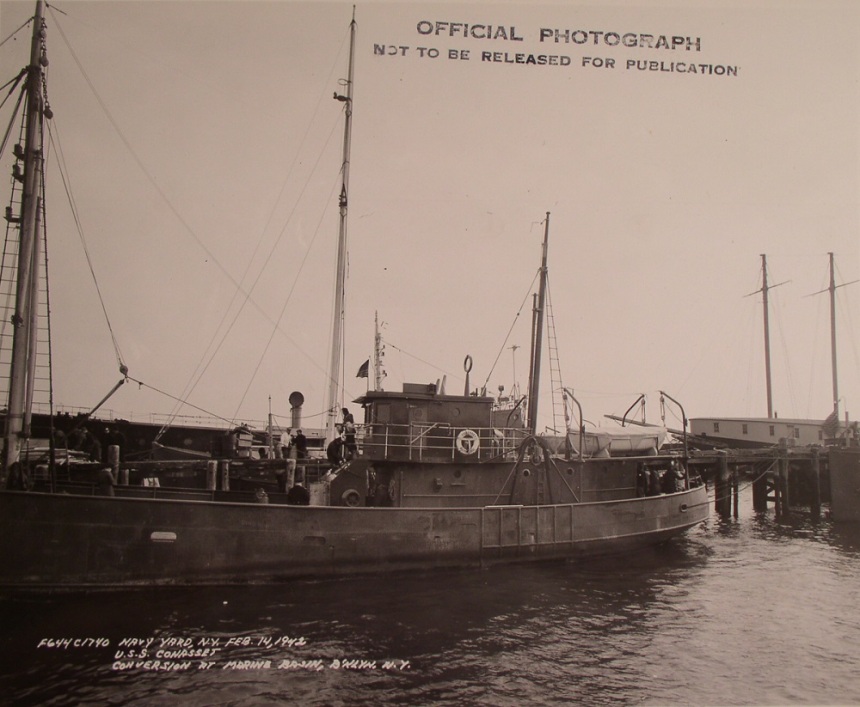 Here we see the brand-new steel-hulled fishing boat Cohasset in Feb. 1942, just before she assumed her military guise as U.S. Navy Patrol Vessel, District (YP) #389, an anti-submarine trawler, and sailed off into a fateful, if one-sided battle.

Laid down at the Fore River Shipyard in Quincy, Massachusetts for R. O’Brien and Company of Boston as hull #1512 along with three sister ships on the eve of the U.S. entry into World War II, the 110-foot trawler was meant to ply the fishing grounds off Gloucester and the Georges Bank.

R. O’Brien was reportedly a top-notch operation, and one of the first in the country to equip their whole fleet with R/T sets in the 1930s, and they landed in excess of 20 million pounds annual catch at the canneries in the area.

When war seemed unavoidable, the four new boats were quickly evaluated to be useful to the Navy and on 6 December 1940 the sister trawlers Salem, Lynn, Weymouth and Cohasset were signed over to the federal government in lieu of taxes by O’Brien and delivered under their ordered names as they were completed throughout October and November 1941. Cohasset was taken into custody by the Navy in February 1942 as a coastal minesweeper, USS AMc-202. This was changed to YP-389 on 1 May and she was refitted into a patrol craft at the Brooklyn Navy Yard. 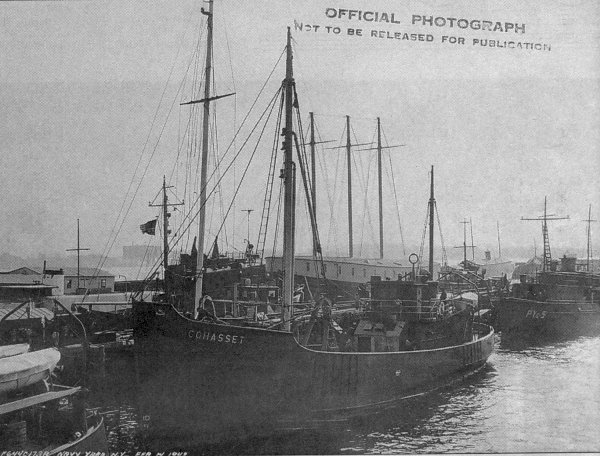 Armed with a single 3″/23cal deck gun taken from naval stores, two Great War-era. 30 cal. Lewis machine guns, six depth charges on a gravity rack and assorted small arms, she was placed under command of one LT. R.J. Philips, USNR who sailed her with a crew that consisted of two ensigns and 21 enlisted (none higher than a PO1) with a mission to keep the U-boats terrorizing the Eastern Seaboard at bay– though she did not have sonar, ASDIC or a listening device of any kind. 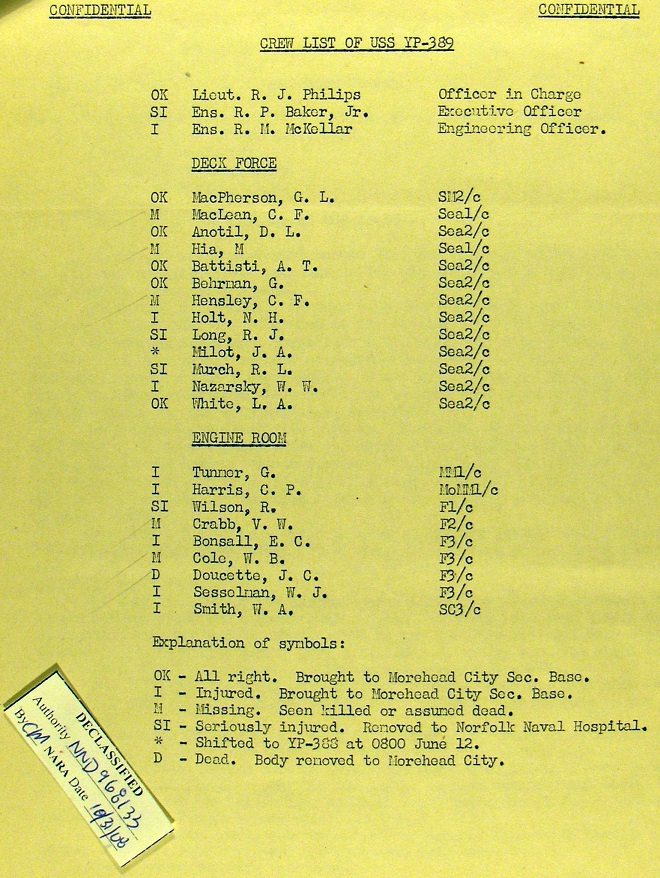 (List of USS YP-389 crew and their disposition after the events of 19 June, 1942. Courtesy the National Archives)

In June 1942, USS YP-389 headed south to North Carolina with the primary duty to patrol the Hatteras minefield on her economic 6-cylinder diesels– just 9 knots when wide open.

There, in the predawn hours of 19 June, she came across Kptlt. Horst Degen’s Type VIIIC submarine, U-701, of 3. Unterseebootsflottille operating out of the pens at La Pallice, France.

The battle should have been over before it started, as the patrol boat’s 3-inch popgun was out of operation with a broken firing pin and Degen’s 88mm and 20mm guns far out-ranged the 389‘s Lewis guns. Still, the surface action took place over a 90-minute period and saw the small patrol craft resort to dropping their depth charges set as shallow as possible in the U-boat’s path in an unsuccessful effort to crack its hull.

In the end, the trawler-turned-fighter was holed several times and sank in 320-feet of water, carrying five of her crew with her to Davy Jones’ Locker some five miles off Diamond Shoals. The crew of YP-389 had fired more than 24 drums from her Lewis gun as the gunners took cover behind trawling winches, answered by 50 shells of 88mm. In all, she had been in the Navy for just five months, most of that undergoing conversion.

The 18 survivors and one body floated overnight, with no life rafts or lifebelts, until they were rescued by Coast Guard picket boats (CG-462 and CG-486) the next morning. Four required treatment at Norfolk Naval Hospital.

In 1948, a Naval Board found that her sinking was in large part avoidable, as she was ill-fitted and suited for the detail assigned to her and, in effect, never should have been there.

Here is how Degen described the action to Navy interrogators a few weeks later:

On the night of June 17, U-701 surfaced off Cape Hatteras close to a U-boat chaser which challenged her with a series of B’s from a signal lamp. Thinking he was going to be rammed, Degen put about and drew away, without answering the challenge. The following day he saw what he thought was the same cutter escorting a tanker and a freighter in line ahead. Degen believed the cutter had made contact with him in passing, for as soon as the convoyed ships were out of range, the cutter returned and dropped depth charges near U-701. Degen said that on this occasion he did not hear the “ping” of Asdic.

The next night, June 19, U-701 surfaced off Cape Hatteras and again sighted what Degen took to be the same cutter. He opened fire with his 8.8 cm gun to which the cutter replied with machine-gun fire. U-701 expended a large number of shells. Apparently, the gun crew, groping over-anxiously in the dark, seized every available shell in the ready-use lockers without discrimination. Thus, fire was an unorthodox mixture of SAP, HE and incendiary shell, but it sank the cutter. Prisoners considered this a wasteful and “untidy” piece of work, and the captain gave the impression that he was ashamed of it.

Degen said he approached to look for survivors with the intention of putting them ashore, but he found none. He said he thought the crew made off in a boat. Prisoners gave the position of the attack as near the Diamond Shoals Lightship Buoy.

The 389 was not the only YP lost during the war and no less than 36 were destroyed while at least 17 earned battle stars (one, USS YP-42, the ex-Coast Guard cutter Gallatin, picked up three battle stars on her own). Though many of those lost foundered in heavy weather, sank after collisions, or were written off due to grounding, a number matched our YP’s combat service: 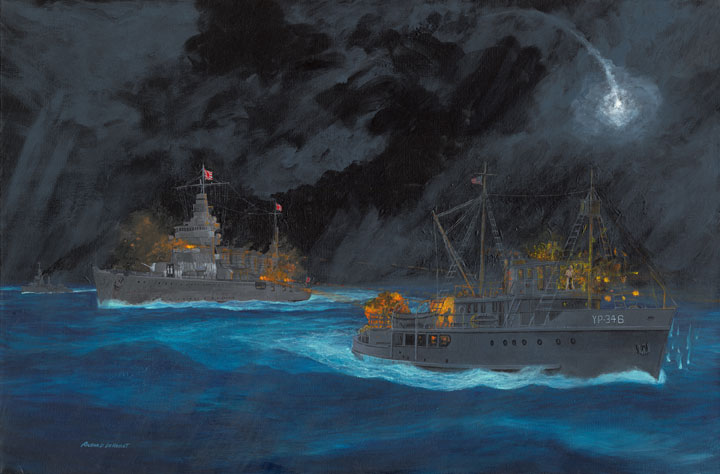 Cover art for David Bruhn’s book provisionally titled, “Yachts and Yippies: the U.S. Navy’s Patrol Yachts and Patrol Vessels.” The painting by Richard DeRosset, titled “Night Action off Tulagi”, depicts the destruction of USS YP-346 by the Japanese light cruiser HIJMS Sendai and three destroyers off Guadalcanal on 8 September 1942. Three Navy Crosses were awarded for this action. Via Navsource

Commissioned 16 Jul 1941, her career lasted but 12 months and, after claiming YP-389 and 25,390 GRT of merchant ships, was herself sunk on 7 July 1942 off Cape Hatteras by depth charges from an A-29 Hudson patrol bomber of the 396th Bomb Sqn, taking 39 dead to the bottom in 100 feet of water. Degen and six survivors suffered at sea for two days and were taken into custody and interrogated by Naval Intelligence extensively. 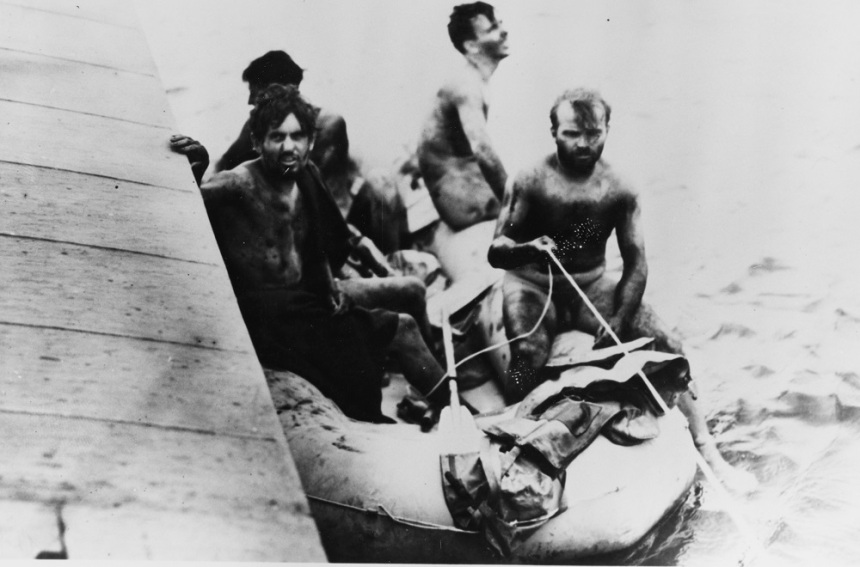 U-701 (German Submarine) Survivors are rescued by the U.S. Coast Guard, after their boat was sunk off Cape Hatteras, North Carolina, on 7 July 1942. She was lost just three weeks after she claimed YP-389, ironically just a few miles Diamond Shoals, where her victim rested. NH 96587 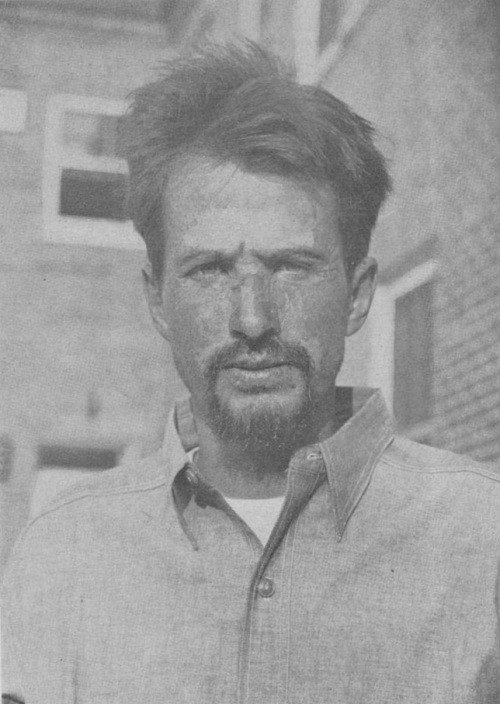 Known to researchers looking for the lost USS Monitor since the 1970s, in 2009, NOAA announced they had verified the wreck of YP-389, and documented the patrol boat and her combat as part of the Monitor National Marine Sanctuary and is listed on the National Register of Historic Places.

U-701 rests near her and is a popular dive attraction in the Graveyard of the Atlantic. Both ships are protected. 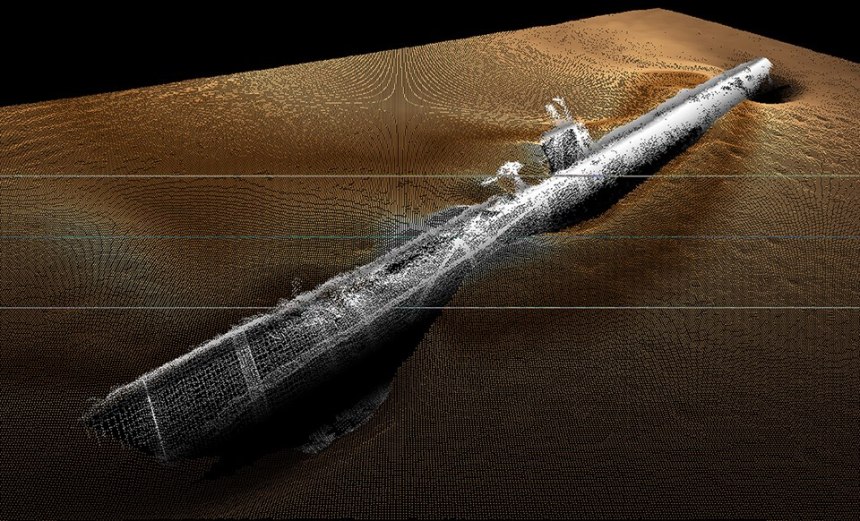 Sonar visualization of the U-701 wreck site. Image ADUS, NOAA 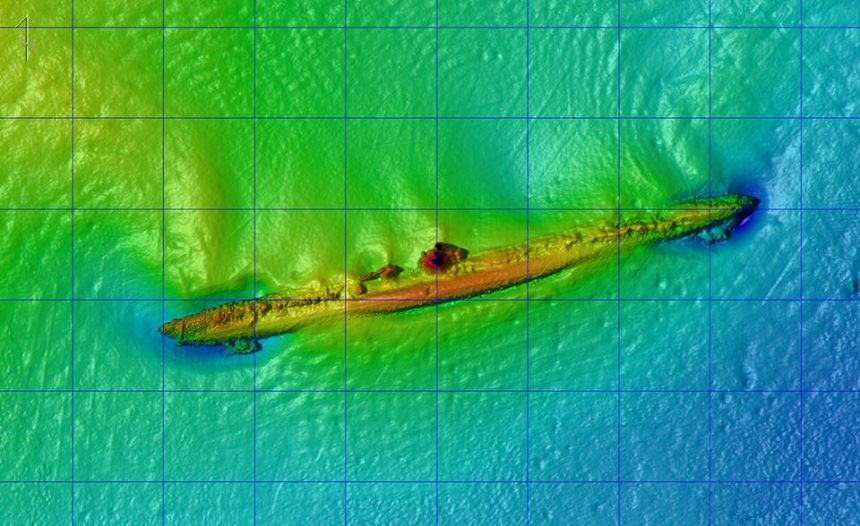 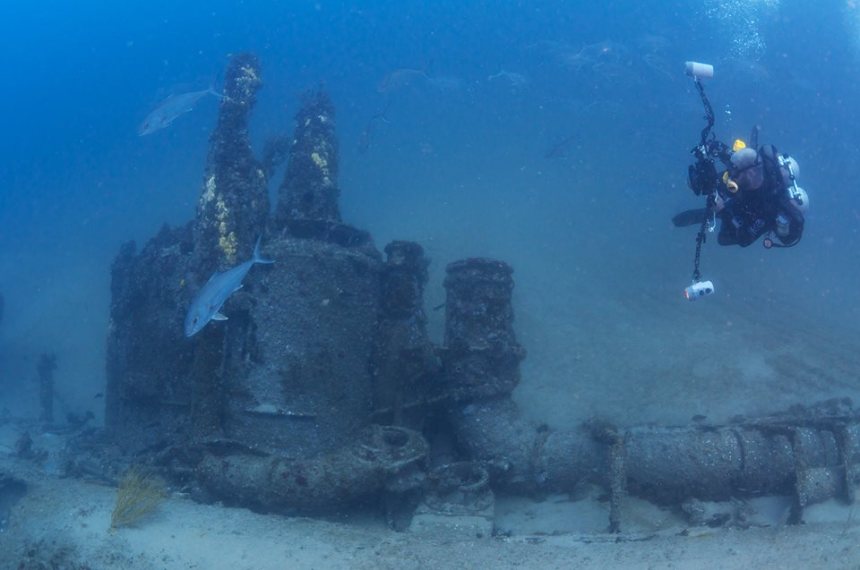