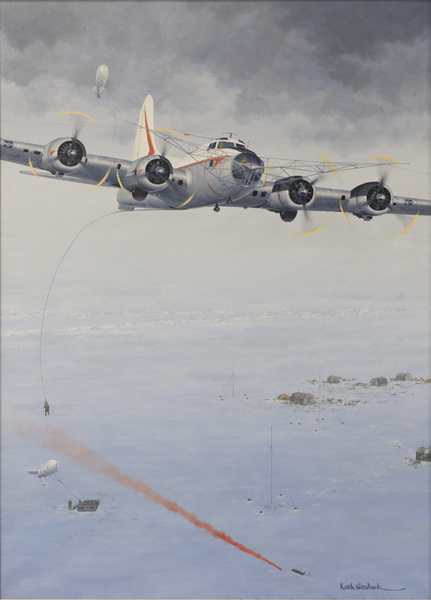 Seven Days in the Arctic by Keith Woodcock, Oil on Canvas, 2007, CIA collection

A true Renaissance man, Leonard A. LeSchack in 1962 jumped out of a perfectly good (CIA-flown) converted B-17 bomber over the Arctic. At the time, he was a lieutenant in the Navy Reserve but before joining up he had already cut his teeth as a petroleum geologist with Shell and some 14 months in the Polar Regions on Air Force Drift Station T-3 and during the International Geophysical Year as an assistant seismologist.

However, the geologist-turned-sailor who was falling through the air from the B-17 was up to something that, when compared to the rest of his epic life story, was altogether unique.

LeSchack was jumping into an abandoned Soviet Ice Station adrift on an ice floe.

Then came a week poking through the remnants the Russkis thought would have gone down with the floe to the frigid sea floor looking for secrets and a Fulton Skyhook zip line in reverse pulled him and his Air Force Russian linguist companion back into the safety of a surplus aircraft.

I spoke to Len back in 2006 when I was working on an article about the ice station break-in, known appropriately as Project Coldfeet, and have remained in contact with this gentleman and scholar over the past decade.

He only really achieved recognition in 2008. 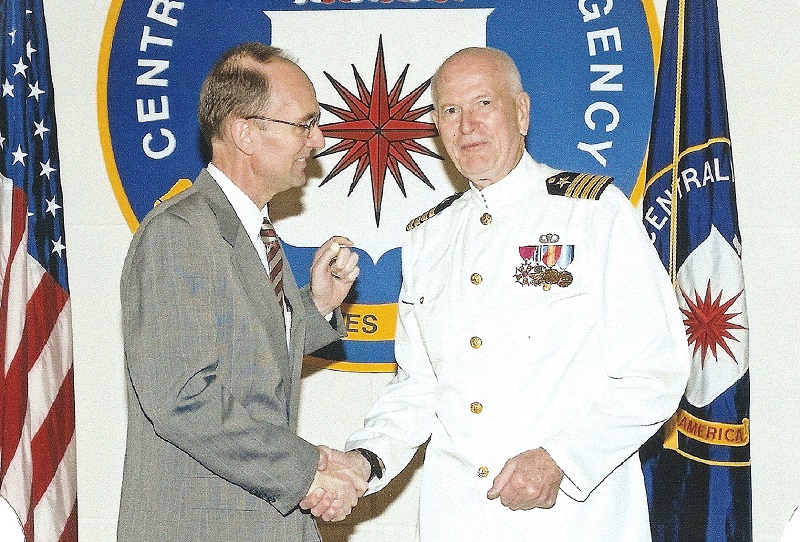 “Leonard A. LeSchack, 46 years after the successful conclusion of Project Coldfeet, now promoted to Captain USNR (ret), while attending the unveiling ceremony of the original painting, “Seven Days in the Arctic,” is presented the “Special Operations Group (SOG) Challenge Coin” by the Chief Special Operations Group, on 21 April 2008, as recognition of his role in that operation. As stated by the Chief, “it was a young officer, Navy Lieutenant Junior Grade Leonard LeSchack, a former Antarctic Geophysicist, who had the early vision and technical expertise to conceive the operation.”

Len even has crossed paths with a relative of mine on a few occasions and I penned another piece or two on Coldfeet for Eye Spy Magazine (Vol 80 and 81) and others to help preserve the sheer elan of the act.

So when he sent me a copy of his memoirs last year, He Heard A Different Drummer, I devoured it. 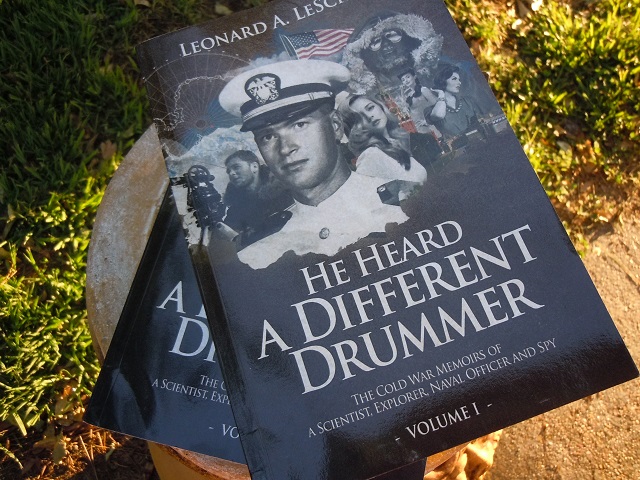 Picking up the Presidential Legion of Merit in 1962, LeSchack again returned to the Antarctic with the Argentine Navy, roamed Europe from Paris to Moscow on a number of research assignments, created and led an intelligence unit operating out of the Florida Keys in the years just after the Bay of Pigs.

Then there was service in Panama, Colombia, Siberia; owning his very own yellow research submarine. Hanging out with world leaders, terrorists, and scientists all.

Then, there were the women.

Len’s story, his autobiography that could never have been told in real time due to the OPSEC, stretches two volumes but is well worth the read, as he has somehow managed to fit two lifetimes into one and is available over at Amazon in paperback and e-book.

I was informed by a friend of Len’s over the weekend that he passed away on Dec. 14 and is expected at Arlington shortly. A final belated honor for a cold warrior.