Combat Gallery Sunday: Inside the dugout

The below, from the LOC, are all sketched by Howard Brodie, who voluntarily left his sweet gig as a sports artist for the San Francisco Chronicle to draw for Yank magazine as an Army combat artist in WWII and got close enough to his subjects (he volunteered as a medic when needed) to receive a bronze star.

Drawing shows two privates, John Minihan of Rockford, Illinois on the right, and Sal de George of Manhattan on the left, kneeling to operate a machine gun from their dugout during the American offensive on Mt. Austen during the World War II Battle of Guadalcanal. Their gun is the iconic M1917 Browning water-cooled sustained-fire GPMG

It is closely related to this one, which was not as fleshed out:

Sketch shows an enlisted man, John H. Minihan of Rockford, Illinois from the side. He kneels as he operates his machine gun from a dugout on the island of Guadalcanal during World War II.

Similarly, this sketch by Brodie is in the same vein, but is inside a fortress made of aluminum rather than jungle earth: 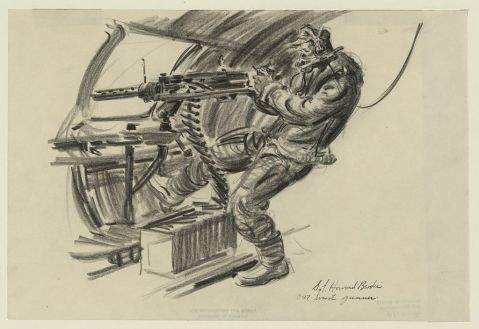 The drawing shows a World War II gunner wearing an oxygen mask as he stands before an open slot in a B-17 airplane firing his machine gun during the Battle of Guadalcanal.

Brodie later went back to war, with his pencils, and covered Korea, French Indochina, and Vietnam.

3 responses to “Combat Gallery Sunday: Inside the dugout edition”