Jumping on The Rock 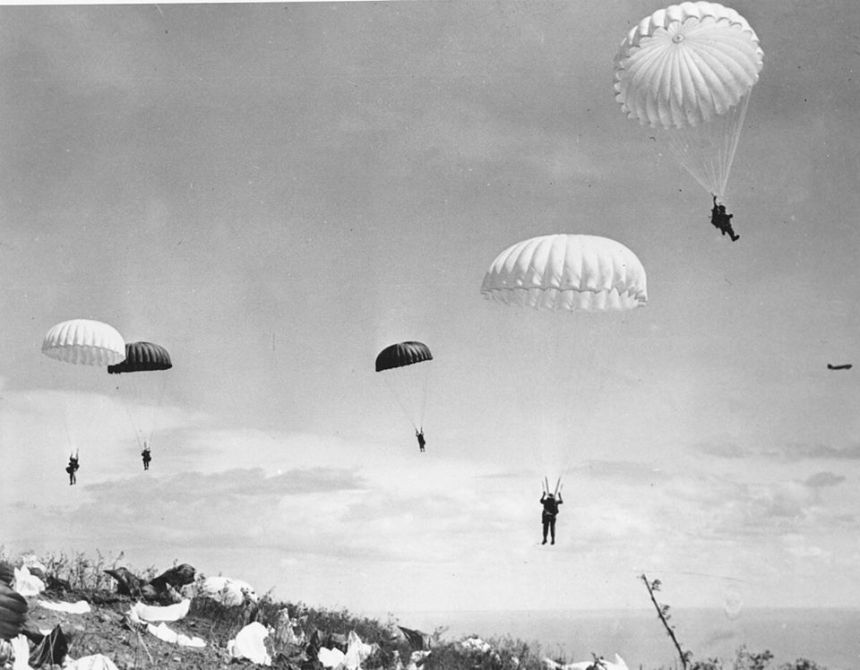 One of the most oft-forgotten U.S. Army combat parachute jumps of all-time was made 75 years ago this week. While everyone knows and celebrates the mass drops at D-Day and Arnhem, and even the earlier Avalanche and Husky landings for Italy and Sicily, the leap made by the Operation Topside drop on 16 February 1945, made by 2,350 men of the 503rd Parachute Regimental Combat Team (PRCT) is overlooked.

A mass low-level drop made by sky soldiers of the 503rd Parachute Infantry Regiment, 462nd Parachute Field Artillery Battalion, and the C coy/161st Airborne Engineer Battalion onto the high ground of the Japanese-held rock fortress of Corregidor was to link up with a low ground beach-landing made by the 34th RCT and take on the 6,700-man garrison which had been in residence since 1942.

Paratroopers, supported by ground forces, landing on Corregidor in the combined assault launched on Feb. 16, 1945 LC-USZC2-6468

It was also one of the only jumps that were extensively filmed by Signal Corps photo crews. For your inspection, 12 minutes of silent films of the 503rd prepping and being dropped Topside on The Rock, showing details of ruined Fort Mills:

Fighting 18-knot crosswinds to come down in a rocky, uneven drop zone that soon got very hot, the 503rd fought non-stop through the night of 18 February, when their action came to a head at Banzai Point. 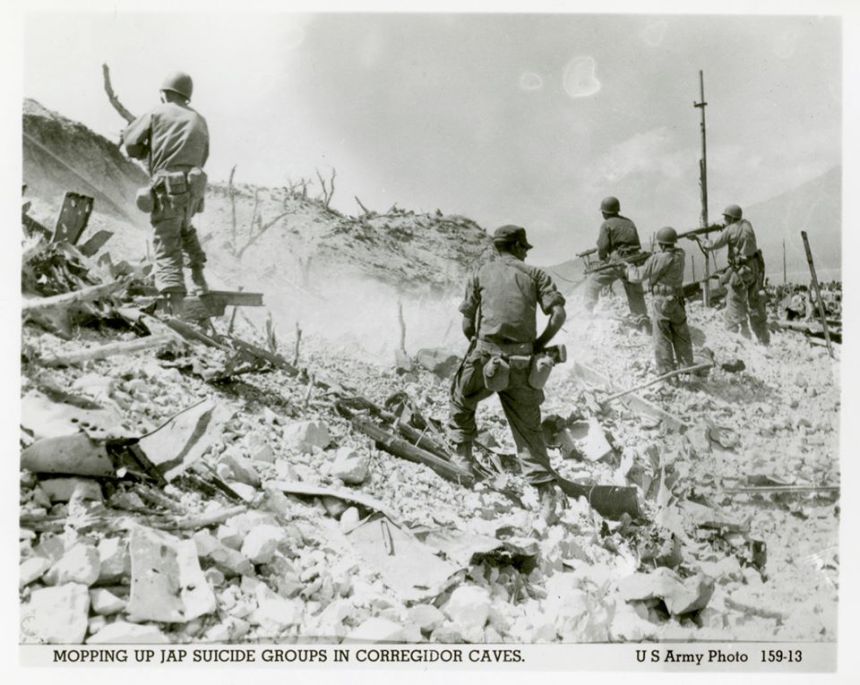 The Rock was not finally pacified until 26 February. Only about 50 Japanese were captured.

18-year-old PVT. Lloyd G. McCarter earned a well-deserved MoH on Topside, as well as a medical discharge only to die at his own hands a decade later in Idaho.

He was a scout with the regiment which seized the fortress of Corregidor, Philippine Islands. Shortly after the initial parachute assault on 16 February 1945, he crossed 30 yards of open ground under intense enemy fire, and at point-blank range silenced a machinegun with hand grenades. On the afternoon of 18 February, he killed 6 snipers. That evening, when a large force attempted to bypass his company, he voluntarily moved to an exposed area and opened fire. The enemy attacked his position repeatedly throughout the night and was each time repulsed. By 2 o’clock in the morning, all the men about him had been wounded; but shouting encouragement to his comrades and defiance at the enemy, he continued to bear the brunt of the attack, fearlessly exposing himself to locate enemy soldiers and then pouring heavy fire on them. He repeatedly crawled back to the American line to secure more ammunition. When his submachine gun would no longer operate, he seized an automatic rifle and continued to inflict heavy casualties. This weapon, in turn, became too hot to use and, discarding it, he continued with an M-1 rifle. At dawn, the enemy attacked with renewed intensity. Completely exposing himself to hostile fire, he stood erect to locate the most dangerous enemy positions. He was seriously wounded; but, though he had already killed more than 30 of the enemy, he refused to evacuate until he had pointed out immediate objectives for attack. Through his sustained and outstanding heroism in the face of grave and obvious danger, Pvt. McCarter made outstanding contributions to the success of his company and to the recapture of Corregidor.”

The unit suffered 169 dead and 531 wounded in addition to more than 210 injuries in the drop itself. Keep in mind it only jumped with 2,300 men.

For its successful capture of Corregidor, the unit was awarded a Presidential Unit Citation and received its nickname, “the Rock Regiment” from it, which is shown on its current Distinctive Unit Insignia.

Today a monument to the Rock Force stands on Corregidor.

This monument is adjacent to the Topside parade deck that honors the ROCK FORCE, the 503rd Regimental Combat team that made the daring airborne assault to liberate Corregidor during World War II.

Meanwhile, the 1st and 2nd battalions, 503rd Infantry Regiment, are currently active and assigned to the 173rd Airborne Brigade, based in Vicenza, Italy.

For more information, read Triumph in the Philippines by Robert Ross Smith and the Luzon Campaign by Andrade