Posted on April 8, 2020 by laststandonzombieisland 2 comments

Here at LSOZI, we are going to take off every Wednesday for a look at the old steam/diesel navies of the 1833-1946 time period and will profile a different ship each week. These ships have a life, a tale all their own, which sometimes takes them to the strangest places. – Christopher Eger

Here we see a beautiful original Kodachrome, likely snapped from the lookout box on her mast, of the Canadian River-class frigate HMCS Thetford Mines (K459) in 1944-45, with an officer looking down towards her bow. Note the D/F antenna forward. You can see a great view of her main gun, a twin 4″/45 (10.2 cm) QF Mk XVI in an Mk XIX open-rear mount, which she would use to good effect in hanging star shells during a nighttime scrap with a convoy-haunting U-boat. Just ahead of the gun is a Hedgehog ASW mortar system, which would also be used that night. Incidentally, scale modelers should note the various colors used on her two rigged 20-man Carley float lifeboats– which would soon see use on a different U-boat.

While today the Royal Canadian Navy is often seen as a supporting actor in the North Atlantic and an occasional cameo performer elsewhere, by the end of World War II the RCN had grown from having about a dozen small tin cans to being the third-largest fleet in the world— and was comprised almost totally of destroyers, frigates, corvettes, and sloops! The force traded 24 of its warships in combat for a butcher’s bill that was balanced by 69 Axis vessels but had proved decisive in the Battle of the Atlantic.

One of the most important of the above Canadian ships were the River-class frigates. Originally some 1,800-tons and 301-feet in length, they could make 20-knots and carry a twin QF 4-inch gun in a single forward mount as well as a modicum of 20mm AAA guns and a wide array of sub-busting weaponry to include as many as 150 depth charges.

In addition to her twin 4″/45 forward, Thetford Mines also carried six 20mm Oerlikons in two twin mounts — one seen here in another LAC Kodachrome– and two singles. Note the wavy lines on the Canadian lieutenant’s sleeve, denoting his status as a reserve officer. The running joke in Commonwealth Navies that used the practice was so that, when asked by an active officer why the braid was wavy, the reservist would answer, “Oh good heavens, so no one would mistake that this is my real job.”

Produced in five mildly different sub-classes, some 50 of the 150ish Rivers planned were to be made in Canada with others produced for the RCN in the UK. This resulted in a shipbuilding boom in the Land of the Great White North, with these frigates produced at four yards: Canadian Vickers in Montreal, Morton in Quebec City, Yarrow at Esquimalt, and Davie at Lauzon.

Canadian River-class frigate HMCS Waskesiu (K330) with a bone in her mouth, 1944. Kodachrome via LAC

Thetford Mines, the first Canadian warship named after the small city in south-central Quebec, was of the later Chebogue-type of River-class frigate and was laid down 7 July 1943. Rapid construction ensured she was completed and commissioned 24 May 1944, an elapsed time of just 322 days. Her wartime skipper was LCDR John Alfred Roberts Allan, DSC, RCNVR/RCN(R).

Coming into WWII late in the Atlantic war, Thetford Mines was assigned to escort group EG 25 out of Halifax then shifted to Derry in Ireland by November 1944. She served in British waters from then until VE-Day, working out of Londonderry and for a time out of Rosyth, Scotland.

A second Kodachrome snapped from K459’s tower. Note the compass and pelorus atop the wheelhouse. You can see the lip of the lookout’s bucket at the bottom of the frame. LAC WO-A037319

In the closing days of the conflict, the hardy frigate– along with Canadian-manned sisterships HMCS La Hulloise and HMCS Strathadam— came across the snorkeling Type VIIC/41 U-boat U-1302 on the night of 7 March 1945 in St George’s Channel. The German submarine, on her first war patrol under command of Kptlt. Wolfgang Herwartz had already sent one Norwegian and two British steamers of Convoy SC-167 to the bottom.

In a joint action between the three frigates, U-1302 was depth charged and Hedgehogged until her hull was crushed and the unterseeboot took Herwartz and his entire 47-man crew to meet Davy Jones. At dawn the next day, the Canadian ships noted an oil slick and debris floating on the water, with collected correspondence verifying the submarine was U-1302.

Thetford Mines would then come to the aid of Strathadam after the latter had a depth charge explode prematurely. 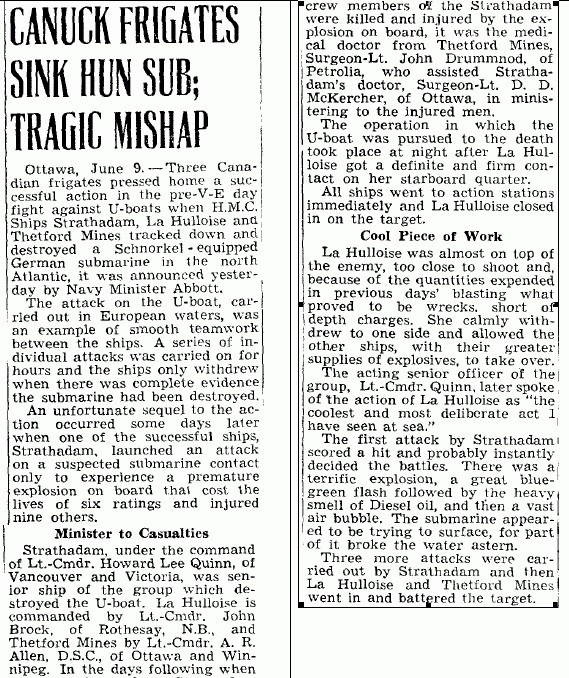 On 23 March, Thetford Mines got a closer look at her enemy when she recovered 33 survivors from the lost German U-boat U-1003, which had been scuttled off the coast of Ireland after she was mortally damaged by HMCS New Glasgow (another Canadian River). The Jacks aboard Thetford Mines would later solemnly bury at sea two of the German submariners who died of injuries.

Finally, on 11 May, our frigate arrived in Lough Foyle, Northern Ireland, to serve as an escort to eight surrendered U-boats.

The event was a big deal, as it was the first mass U-boat surrender, and as such was attended by ADM Sir Max Horton along with a single Allied submarine-killer from each major fleet made up the van. Thetford Mines represented Canada. USS Robert I. Paine (DE-578), which had been part of the Block Island hunter-killer group that had scratched several U-boats, represented America. HMS Hesperus (H57), credited with four kills including two by ramming, represented the RN.

A row of surrendered Nazi U-boats at Lisahally in Co. Londonderry on 14th May 1945. I believe Thetford Mines is in the background. Photo by Lieutenant CH Parnall. Imperial War Museum Photo: A 28892 (Part of the Admiralty Official Collection). 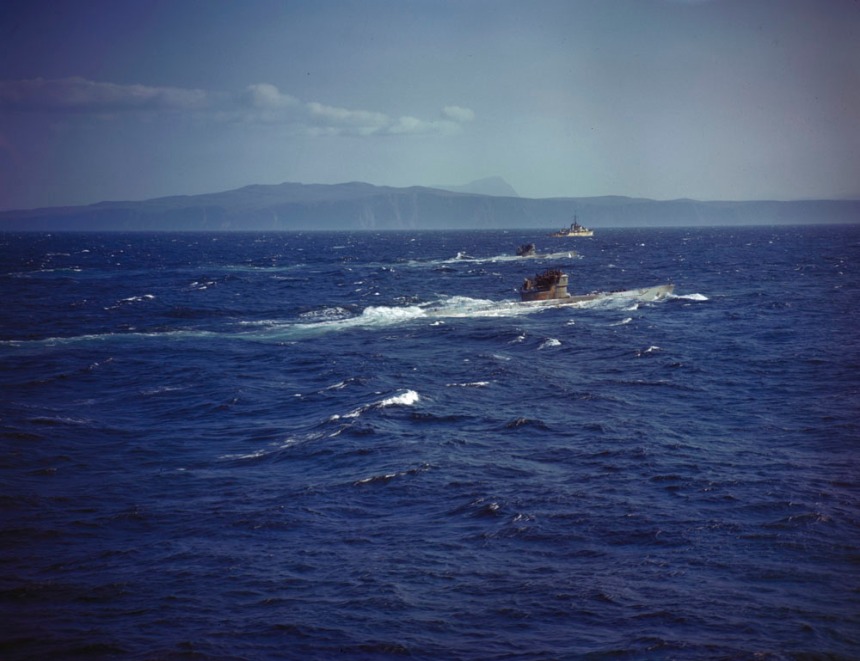 Returning to Canada at the end of May 1945, Thetford Mines undoubtedly would have soon picked up more AAA mounts to fight off Japanese kamikaze attacks in the final push against that country’s Home Islands, but it was not to be and was paid off on 18 November at Sydney, Nova Scotia, before being laid up at Shelburne.

HMCS Thetford Mines (K459) at anchor in Bermuda. The photo was taken after VE-day while the frigate was returning to Halifax. They were diverted to Bermuda to ease the congestion at Halifax caused by all the ships returning at the same time. From the collection of John (Jack) Davie Lyon. Via FPS

Her career had lasted a week shy of 18 months, during which she made contact, sometimes violent, with at least 10 German U-boas in varying ways. Her battle honors included “Gulf of St. Lawrence 1944,” “North Sea 1945,” and “Atlantic 1945.”

As for Thetford Mines, as noted by the Canadian Navy, “In 1947, she was sold to a Honduran buyer who proposed converting her into a refrigerated fruit carrier.”

According to Warlow’s Ships of the Royal Navy, she was in fact converted to a banana boat with the name of Thetis. Her fate is unknown.

What of her sisters?

Of the 90 assorted Canadian River-class frigates ordered, a good number were canceled around the end of WWII. Four (HMCS Chebogue, HMCS Magog, HMCS Teme, and HMCS Valleyfield) were effectively lost to German U-boats during the conflict. Once VJ-Day came and went, those still under St George’s White Ensign soon went into reserve.

Several were subsequently sold for peanuts to overseas Allies looking to upgrade or otherwise build their fleets to include Denmark, the Dominican Republic, Chile, Israel, Peru, and India.

Others, like our own Thetford Mines, were de-militarized and sold on the commercial market including one, HMCS Stormont, that became Aristotle Onassis’s famous yacht, Christina O. HMCS St. Lambert became a merchant ship under Panamanian and Greek flags before being lost off Rhodes in 1964. Still others became breakwaters, their hulls used to shelter others.

One, HMCS Stone Town, was disarmed and tasked as a weather ship in the North Pacific in the 1950s and 1960s.

Twenty-one of the best Canadian-owned Rivers still on Ottawa’s naval list was taken from reserve in the early 1950s and converted to what was classified as a Prestonian-class frigate with “FFE” pennant numbers. This conversion included a flush-decked configuration, an enlarged bridge, and a taller funnel. Deleted were the 20mm Oerlikons in favor of some 40mm Bofors. Further, they had their quarterdeck enclosed to accommodate two Squid anti-submarine mortars in place of the myriad of depth charges/Hedgehog. The sensor package was updated as well, to include ECM gear. One, HMCS Buckingham, was even given a helicopter deck.

The Prestonian-class frigate HMCS Swansea (FFE 306) in formation with other ocean escorts, 1964 via The Crow’s Nest

These upgraded Rivers/Prestonians served in the widening Cold War, with three soon transferred to the Royal Norwegian Navy.

Most of the remaining Canadian ships were discarded in 1965-66 as the new St. Laurent– and Restigouche-class destroyers joined the fleet.

Two endured in auxiliary roles for a few more years: HMCS St. Catharines as a Canadian Coast Guard ship until 1968 and HMCS Victoriaville/Granby as a diving tender until 1973.

In the end, two Canadian Rivers still exist, HMCS Stormont/yacht Christina O, and HMCS Hallowell/SLNS Gajabahu, with the latter a training ship in the Sri Lankan Navy until about 2016.

Starting life in WWII as a Canadian Vickers-built River-class frigate HMCS Stormont, Christina O was purchased in 1954 by Greek shipping magnate Aristotle Onassis, who transformed her into the most luxurious private yacht of her time. She went on to host a wealth of illustrious guests, ranging from Marilyn Monroe and Frank Sinatra to JFK and Winston Churchill.

As far as I can tell, there has not been a second Thetford Mines in the RCN. A series of posterity websites exist to honor the frigate’s crew.

For more information on the RCN in WWII, please check out Marc Milner’s North Atlantic Run: The Royal Canadian Navy and the Battle for the Convoys. 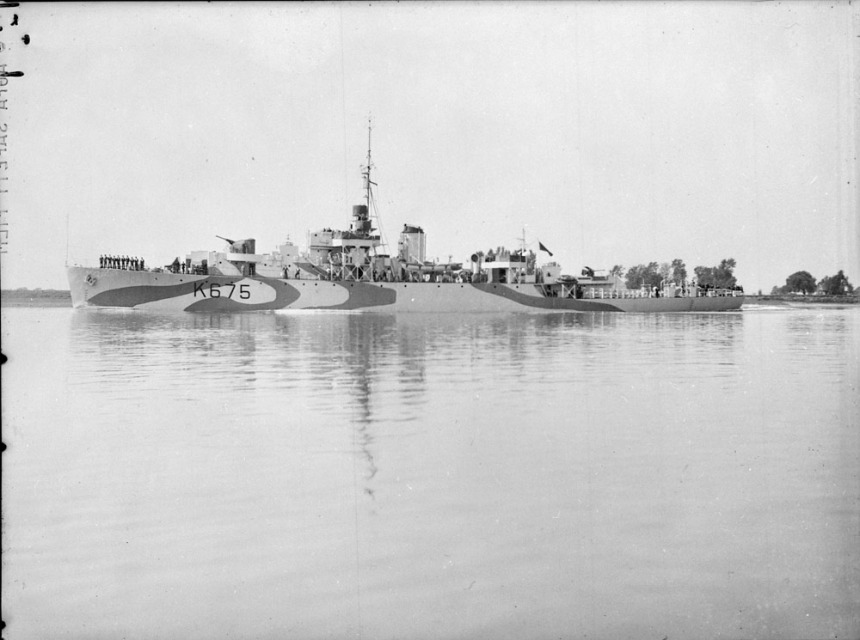