“My first warlike frenzy!” Via The Illustrated Naval and Military magazine

Happy birthday today to the oldest regiment in the British Army– and among the snazziest dressers, with Hunting Stewart tartan trews being a standard part of their kit for a long time. 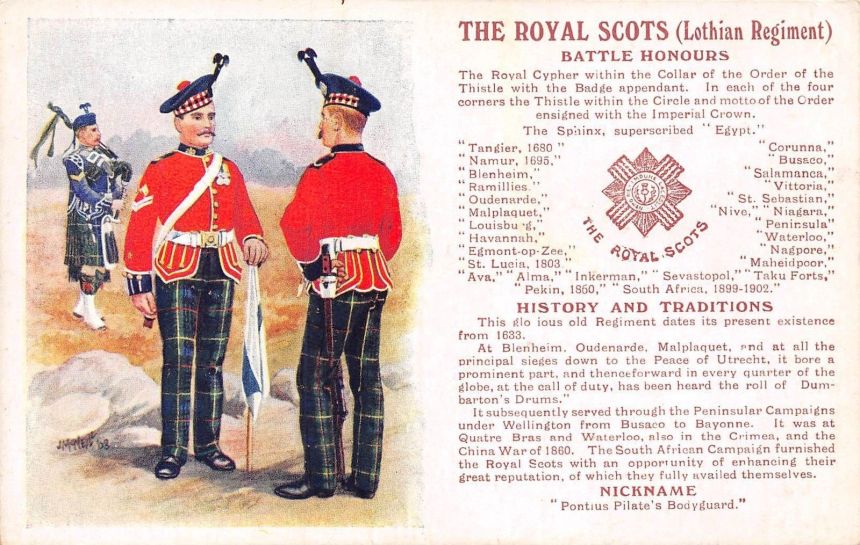 Although the British standing army dates to a Royal Warrant issued by Charles II on 26 January 1661, the oldest regiment actually predates that by a good bit.

Sir John Hepburn, then a 34-year old Scottish soldier who had been fighting in the Thirty Years War for about half his life and had already been made a colonel and knighted by Swedish King Gustav II Adolf, was granted a warrant dated Edinburgh, 24 April 1633, by the Privy Council of Scotland to raise a regiment of 1,200 men in Scotland for French service.

Dubbed originally Régiment d’Hebron, it was off to the Continent in no time to see bloody combat. While Sir John himself was killed by a gunshot wound during the siege of Saverne in Alsace just three years later and buried at Toul, his regiment lived on and over time would become the First Foot or Royal Scots in British service, where it had remained ever since.

The Regiment has since picked up Battle Honours at:

And they looked good doing it.

Via the http://www.theroyalscots.co.uk/ Royal Scots

In 2006, the unit was merged with the other Scottish Infantry Regiments to form one of the seven battalions of The Royal Regiment of Scotland. The direct link is to 1st Battalion, The Royal Scots Borderers or 1 SCOTS, a Specialised Infantry Battalion providing overseas capacity building (training, assistance, advice and mentoring) to British allies.

The unit today is some 386 years old.

Sir John would be proud.

Part of B Company, 1 SCOTS, Camp Qargha, Kabul with their Foxhounds, 2016