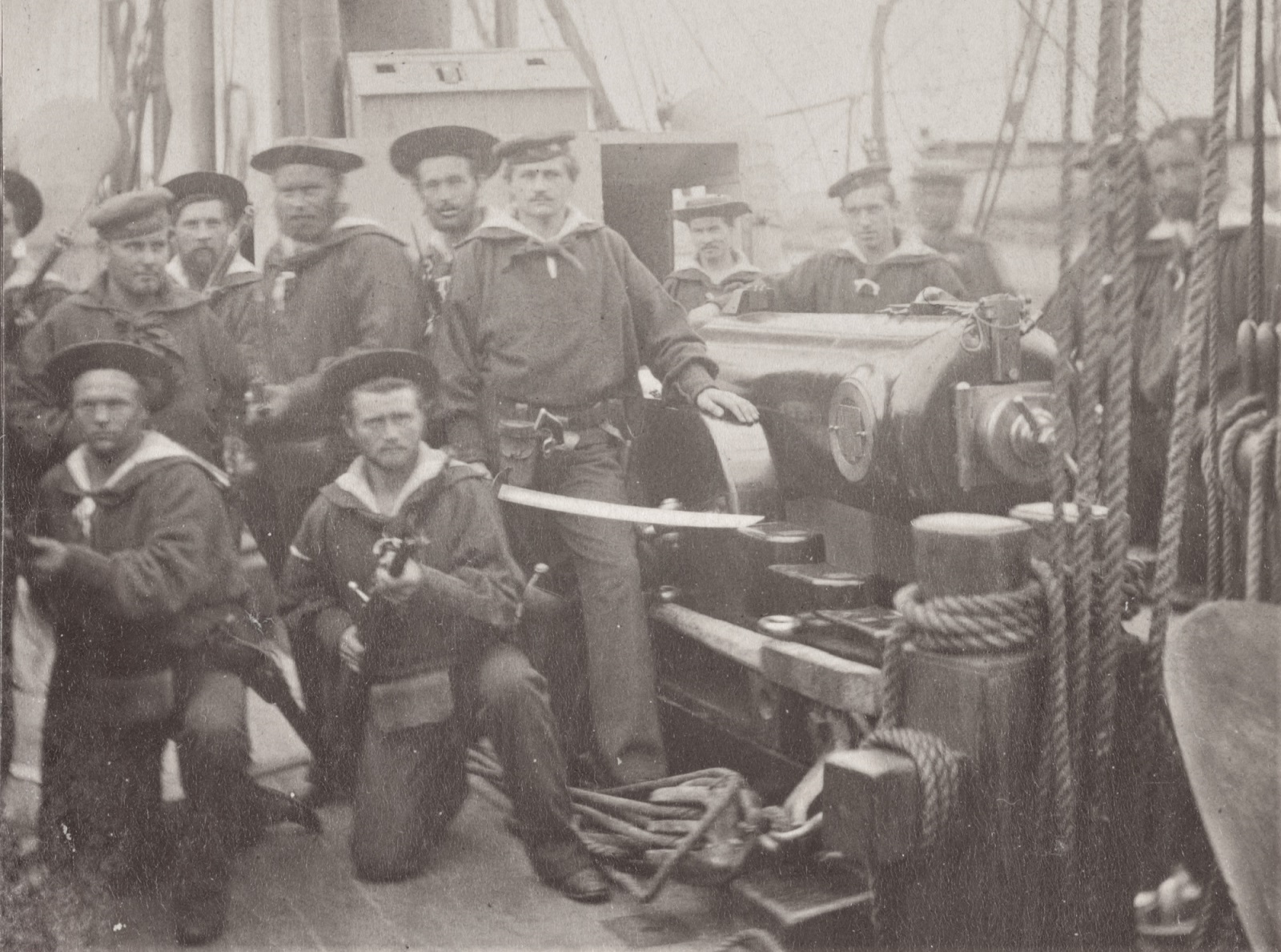 Cropped stereograph by Hermann Schoene, Otto Loehr, and William Trupp, via the Library of Congress. https://www.loc.gov/pictures/item/2006678582/

Here we see a very martial pose struck by a group of jacks on the Camäleon-class dampfkanonenboot Meteor of the short-lived Norddeutsche Bundesmarine, or North German Federal Navy, at the time visiting New York City in May 1871. Note the flat caps, cutlasses, Dreyse needle-guns (Zündnadelgewehr), holstered 1851 Colt revolver, and nearby Krupp wedge-locked 4.7-inch breechloader. Meteor had an interesting history, having fought the only seagoing naval battle of the Franco-Prussian War– in the Americas of all places– 150 years ago this week.

The Camäleons were a product of their age, just 142-feet long, they carried a schooner rig in addition to their early steam plant. Copper-sheathed over an oak hull, they were not meant for speed and would wallow in blue water but they could float in coastal waters and provide a modicum of resistance to foreign interlopers, which was about the best the Royal Prussian Navy could hope for in the 1860s when they were ordered. Eight of these hybrid steam/sail gunboats were ordered but the Prussian fleet was in such a nascent sort of affairs that most were laid up soon after commission and some didn’t even have a chance to complete sea trials.

The subject of our story, Meteor, was laid down 17 June 1861 at the Wolgast shipyard in Lübke– about the time Tennessee decided to secede from the United States– but government bean counters drug their feet on paying the yard the princely sum of 94,400 thalers to complete the vessel and she only joined the fleet in September 1869– while Ulysses S. Grant was President in the States. While on the builder’s ways, the Prussian Navy had morphed into the Greater Germanic Norddeutsche Bundesmarine as a steppingstone to the unified Kaiserliche Marine of 1872 after Wilhelm I was named Kaiser.

Meteor’s inaugural skipper, 30-year-old KptLt/ Ernst Wilhelm Eduard von Knorr, had already spent half of his life at sea under various German flags and had seen combat against pirates off the coasts of both Morocco and China, and he took his new ship and crew to the West Indies, arriving off the coast of unrest-addled Venezuela the day after Christmas in 1869, to protect German interests and property there as part of an international naval blockade. Literal gunboat diplomacy.

Operating out of Curacao in the Dutch Antilles, Meteor was Germany’s first overseas station ship.

Moving into the new year, her 1870 Caribbean cruise was filled with pitfalls, scraping her hull on a reef off Haiti, battling a Yellow fever outbreak among her crew, and weathering the occasional unfriendly shell from Venezuelan coastal forts.

Then, on 5 August, Knorr got word that his country was at war with the French Empire– a nation with a much larger navy and numerous colonies in the West Indies.

The German skipper’s first thought was to ditch his slow gunboat, transfer its crew and guns to something faster, and assume the role of a commerce raider. Picking his way gingerly to neutral Kingston and then Key West, where he was able to communicate with the German counsel– and was crushed to learn Berlin had no desire for Knorr to become a raider, he set out for the myriad of islands in the Bahamas chain where the cool neutrality of the British Crown offered him an umbrella of protection from roving French naval assets.

Out of coal, Knorr put into Havana on 7 November. To his bad luck, the French arrived later that same day.

Flying the tricolor, the 182-foot French steam aviso Bouvet under Capitaine de Frégate Alexandre Franquet– a career officer with service in the Crimean War and, like Knorr, off the wild China coasts under his belt– soon made ready for combat, clearing the ship’s decks and rigging sandbags.

As the rules of neutrality had to be upheld, Franquet sent a dispatch to the German vessel with a challenge and stood to, just off the port, to wait for a Bataille Navale. Meteor obliged and sortied out on the morning of the 9th as neutrality rules required a wait of 24 hours since the Frenchman left harbor before the Germans could pursue them with the Spanish corvette Hernan Cortez standing by a referee. Truly an elegant Old-World contest if there ever was one.

With both vessels largely matched in size and armament, Bouvet had a slight advantage in speed due to a better powerplant and hull form. Nonetheless, the ensuing surface action proved inconclusive, with the two vessels dancing a lazy series of turns trying to gain an advantage, coming in and out of cannon range over the course of three hours. 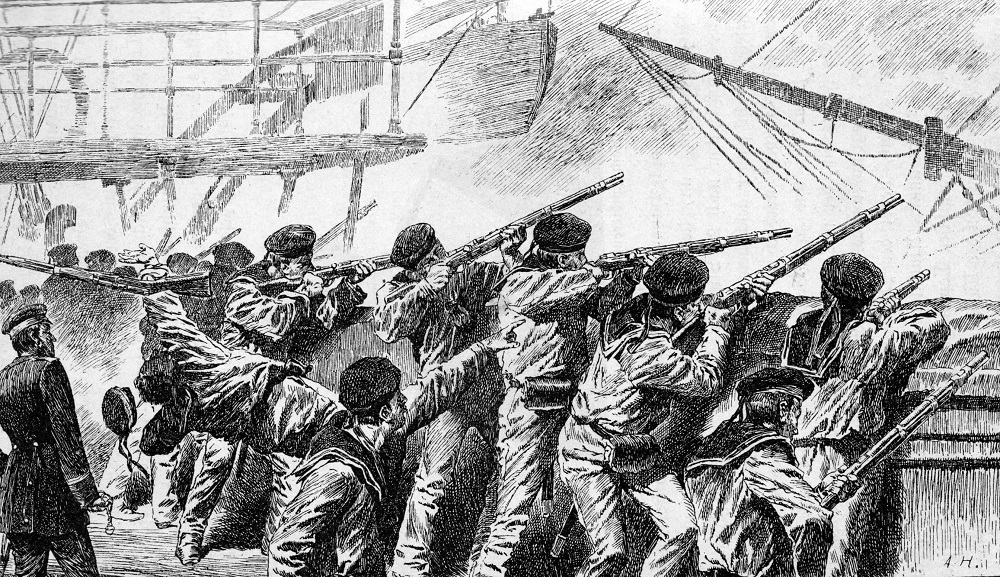 Meteor got off 22 shells at Bouvet in addition to rifle fire, scoring 2 hits which caused minor damage.

Unfurling canvas, Bouvet broke free before Knorr’s salts could board and the engagement ended with a warning shot from Cortez as the vessels had strayed back into Cuban waters.

Licking their wounds, the combatants went back into Havana together, where they were the talk of the town. Although neither ship was mortally wounded, and each side suffered less than a handful of casualties to their respective crews, the matter had come to an end honorably. Two deceased German crewmen– Steuermann Carbonnier and Matrosen Thomsen– were buried ashore at the Cementerio de Colón, and a seriously wounded man sent to the hospital.

Counting himself lucky, Knorr kept Meteor in the safety of the Cuban port until the conflict ended the following April, sailing up the U.S. eastern seaboard (where our photos in New York were taken) before crossing the Atlantic for home, being celebrated at Plymouth before arriving at Kiel on 25 June. 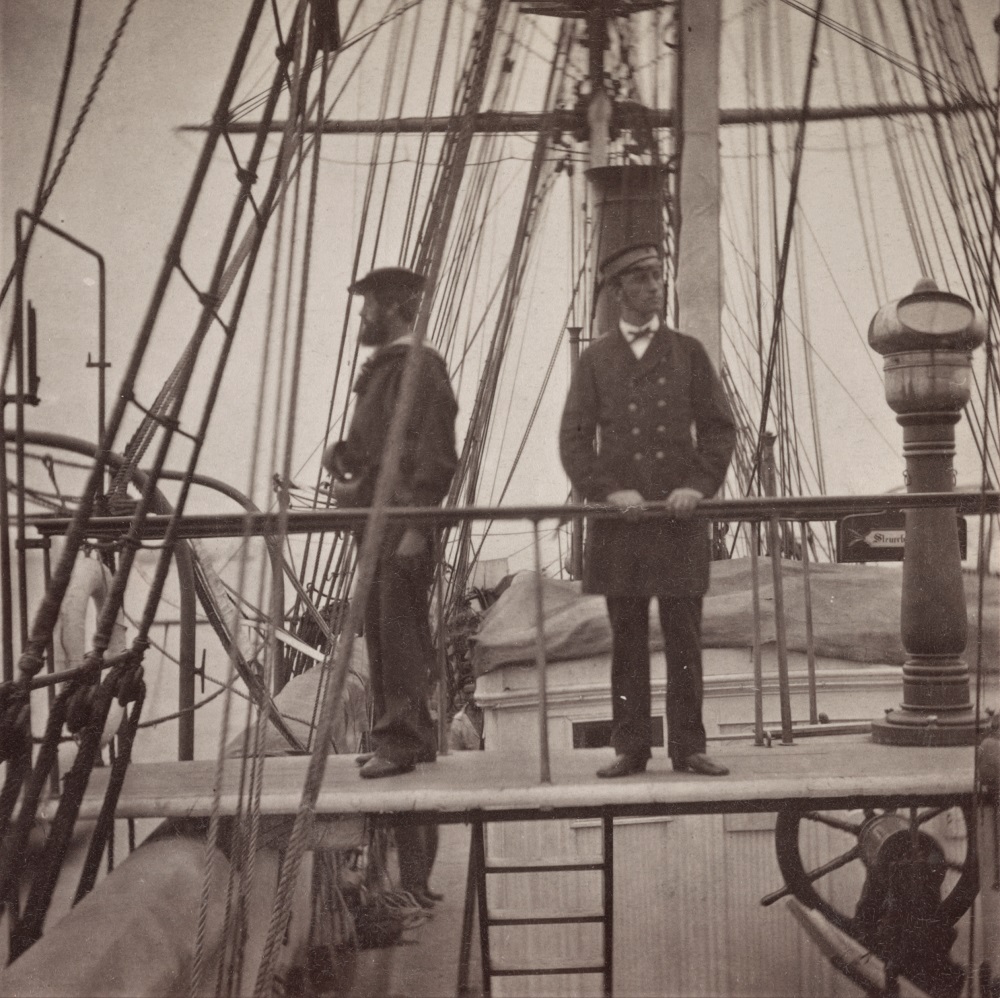 In all, she had spent 19 months on her overseas deployment, one for the German Navy’s record books.

Meteor would go on to have a quieter career, used for a variety of training and coastal survey work until trouble broke out in Spain in 1873, which required some good old-fashioned gunboat diplomacy. Further unrest in the Balkans found the crew of the German gunboat on libo in Smyrna in 1876 where they were involved in a high-profile street brawl with visiting French sailors.

Rapidly approaching obsolescence in an age of iron-and-steel warships, Meteor was decommissioned in 1877 and used as a coal hulk for a time at Kiel, with some of her machinery recycled for the newly constructed gunboat SMS Iltis.

Knorr, whose career blossomed after the Meteor fight earned him an iron cross, went on to become a full admiral in the Kaiserliche Marine and a member of the Order of the Black Eagle, having gone on to directly help establish the German colonial empire from Samoa to Cameroon by 1899. 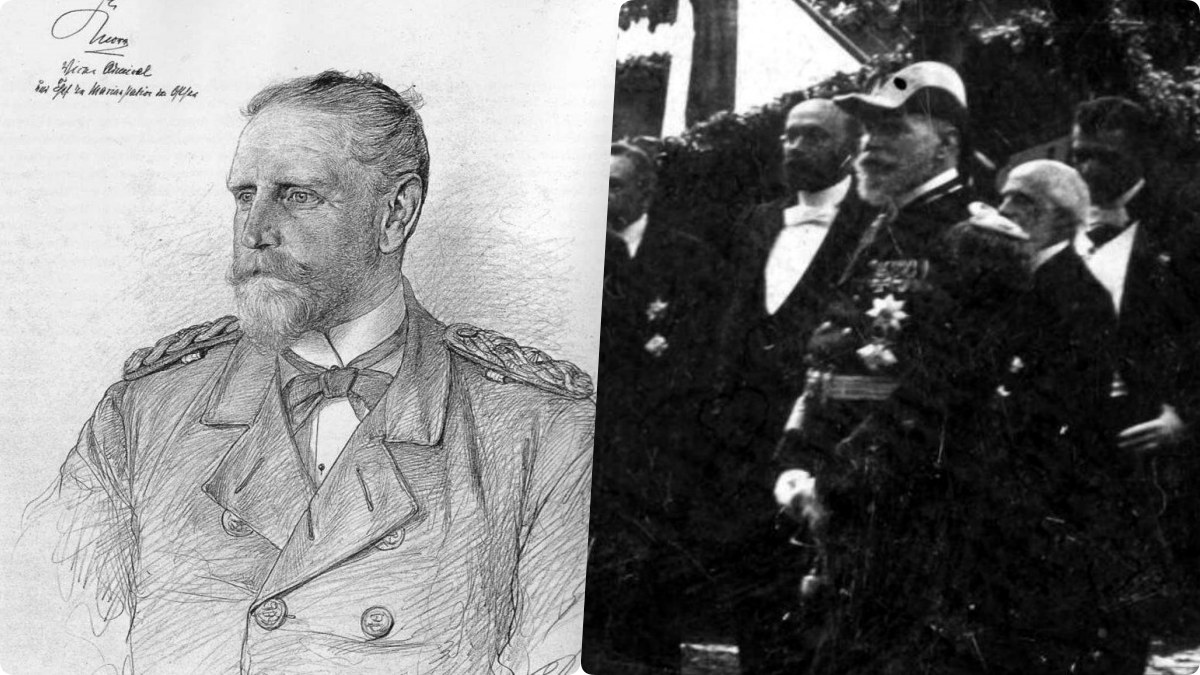 He died in 1920 and a street in his river city birthplace of Saarlouis is still named for him.

The exotic pitched battle between the two gunboats in a Spanish colonial port would prove a romantic favorite of late 19th and early 20th Century maritime artists and would be portrayed by Hans Bohrdt, Charles Leduc, Fredrich Meister, Robert Parlow, Hermann Penner, Christopher Rave, Willy Stower, and Reinhold Werner, among others. 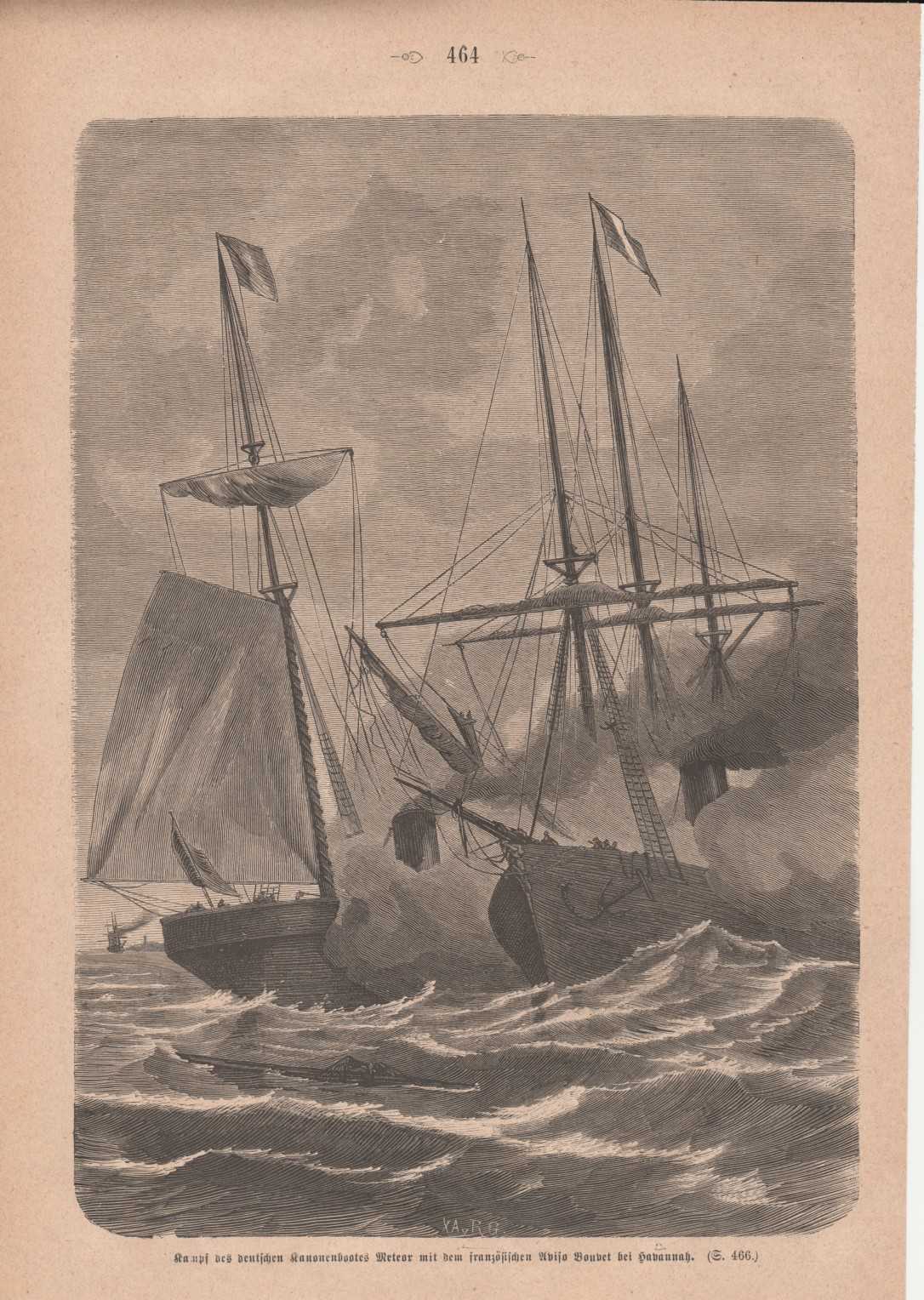 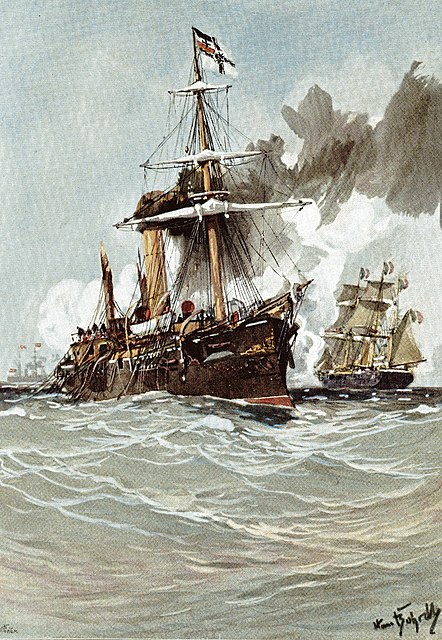 A circa 1863 1:96 scale model of Meteor is retained in the collections of the German Museum of Technology in Berlin and a modern version is in the International Maritime Museum in Hamburg.

As for her war dead, they are still in Havana, where German citizens there installed a monument via subscription that is still regularly maintained and visited, with a ceremony last year that had both the French and German ambassadors in attendance.