100 years and one day ago today: Thanksgiving Day menu for a dinner held at the Marine Barracks, Cavite, Philippine Islands on 24 November 1921. 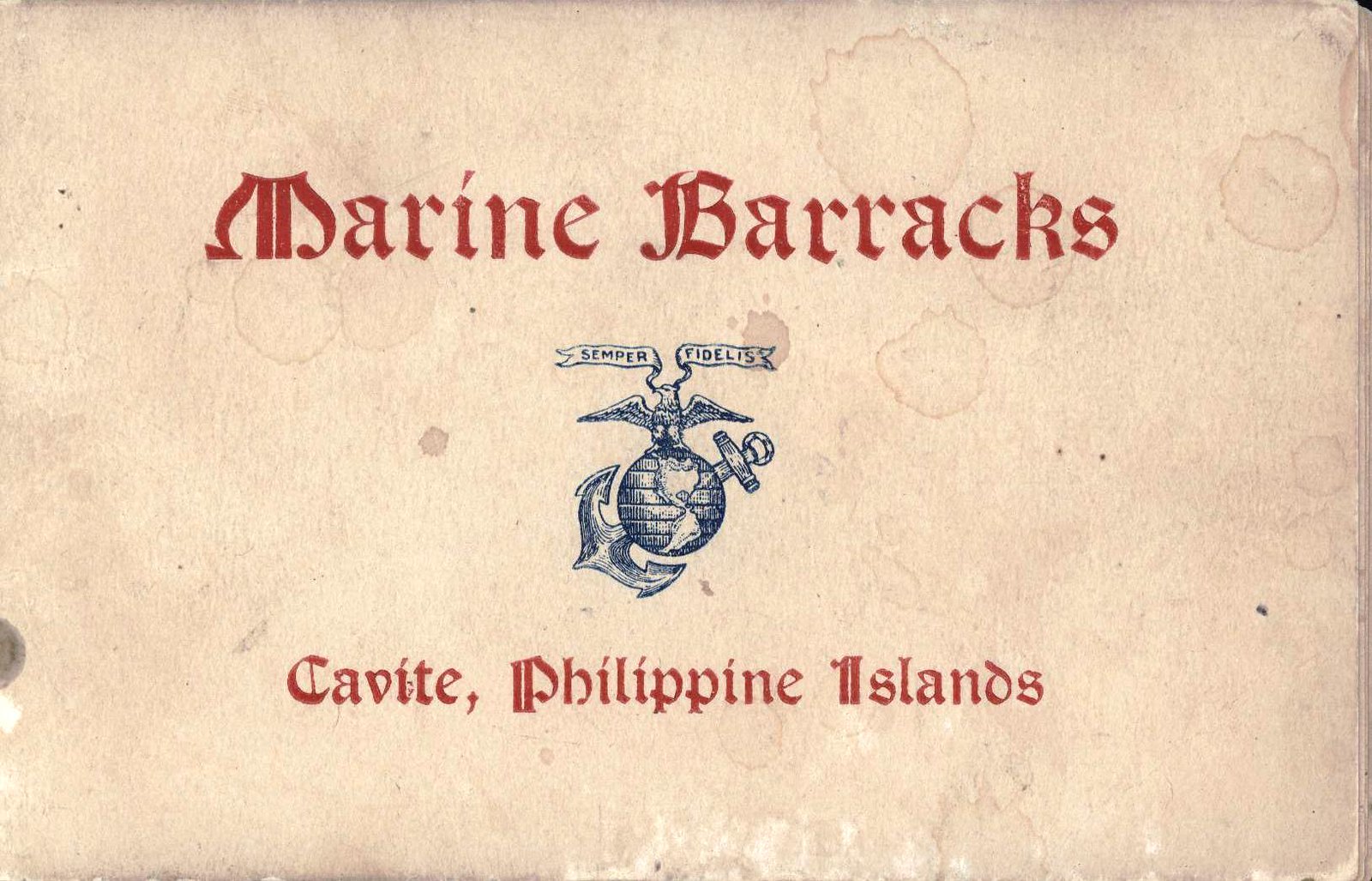 From the Otto Dander Collection (COLL/2431) at the Marine Corps Archives and Special Collections. 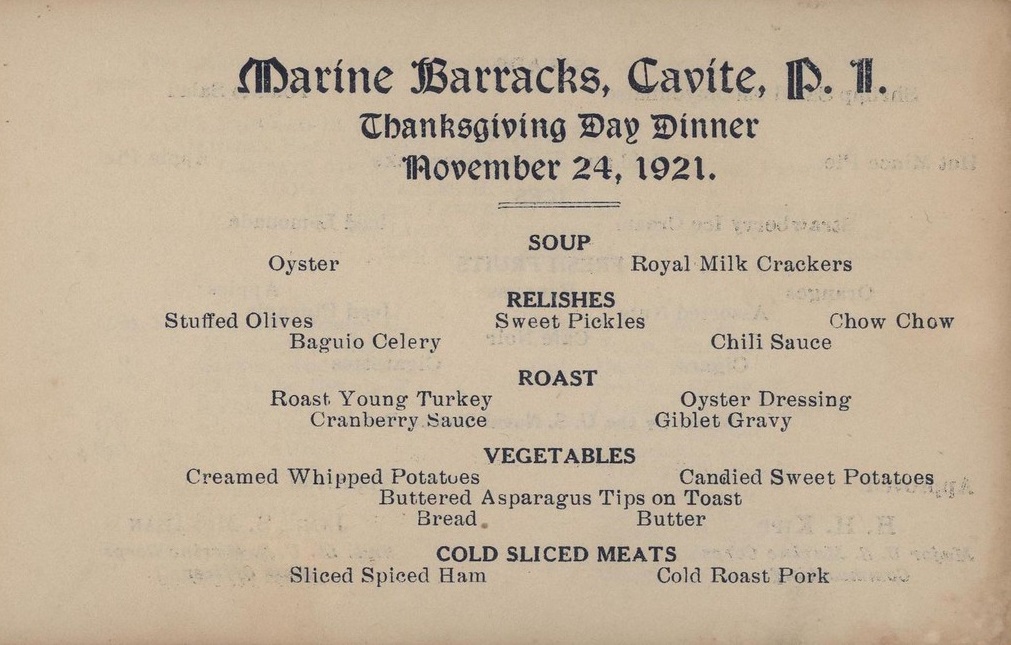 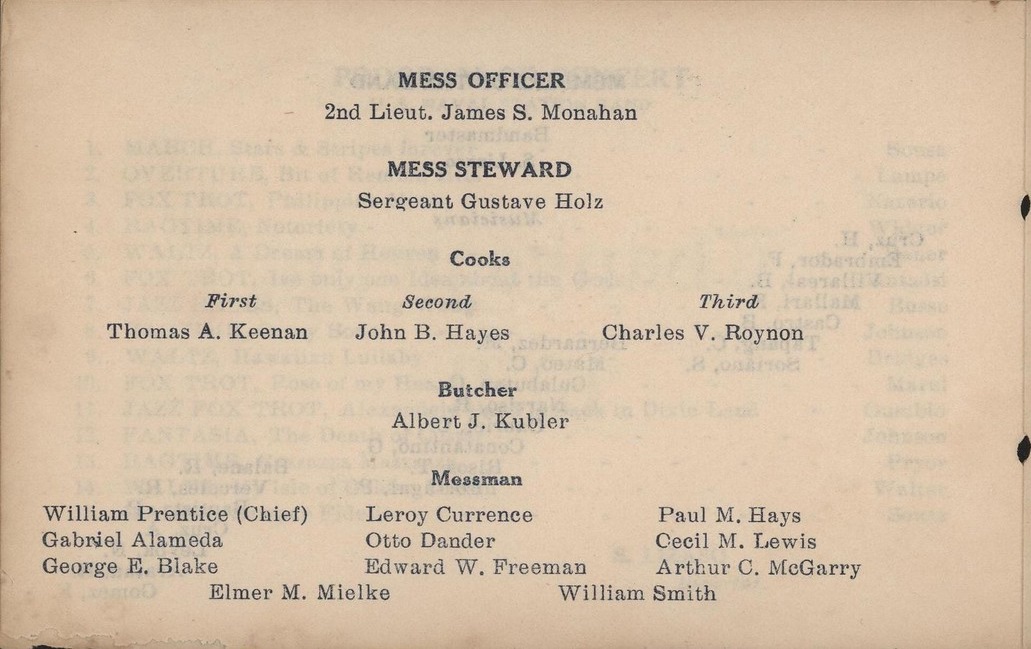 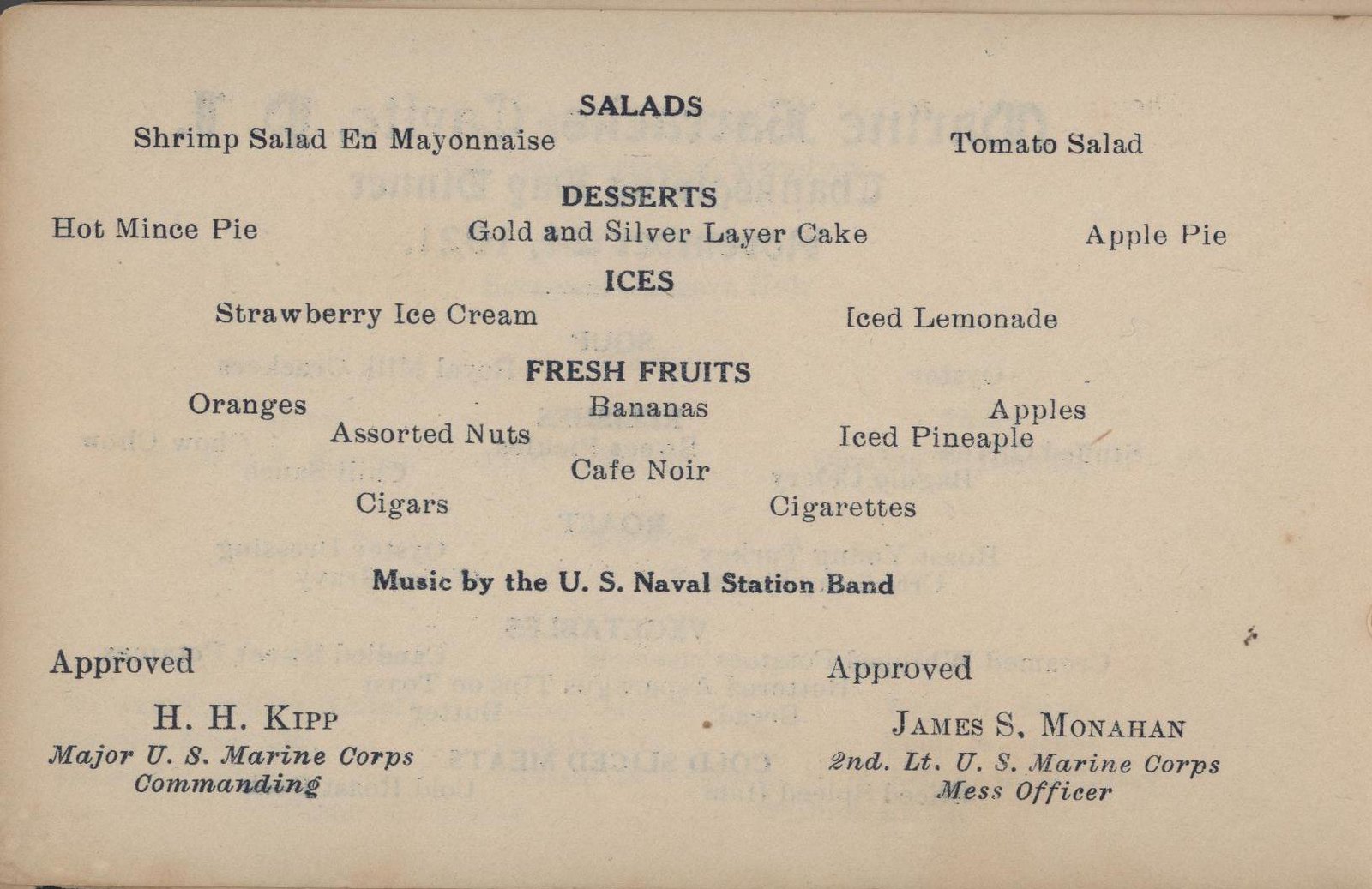 At the time, predating deployment of the famed “China Marines” of the 4th Marine Regiment to the region, the entire Corps numbered a paltry 22,990 officers and men, mostly afloat, detailed for the occupation of Haiti, and embroiled in the Banana Wars of Central America. However, with MAJ E. H. “Pete” Ellis working on his unauthorized (at least officially) 30,000-word report– his “Advanced Base Operations in Micronesia” — outlining a strategy for the Marines to win the war he foresaw brewing in the Pacific against a growing and increasingly aggressive East Asian power (then the Empire of Japan) the coming “pivot to the East” seems very relevant today. Ellis had served in the PI on the eve of his, um, extracurricular activities against the Empire.

The Cavite Barracks, dating back to 1900, was in 1921 home to a company-sized element responsible for the security of the area, based at first in the old Spanish Fort San Felipe, then in new-construction barracks after about 1908, as the Navy expanded into nearby Olongapo and the Subic Bay area. 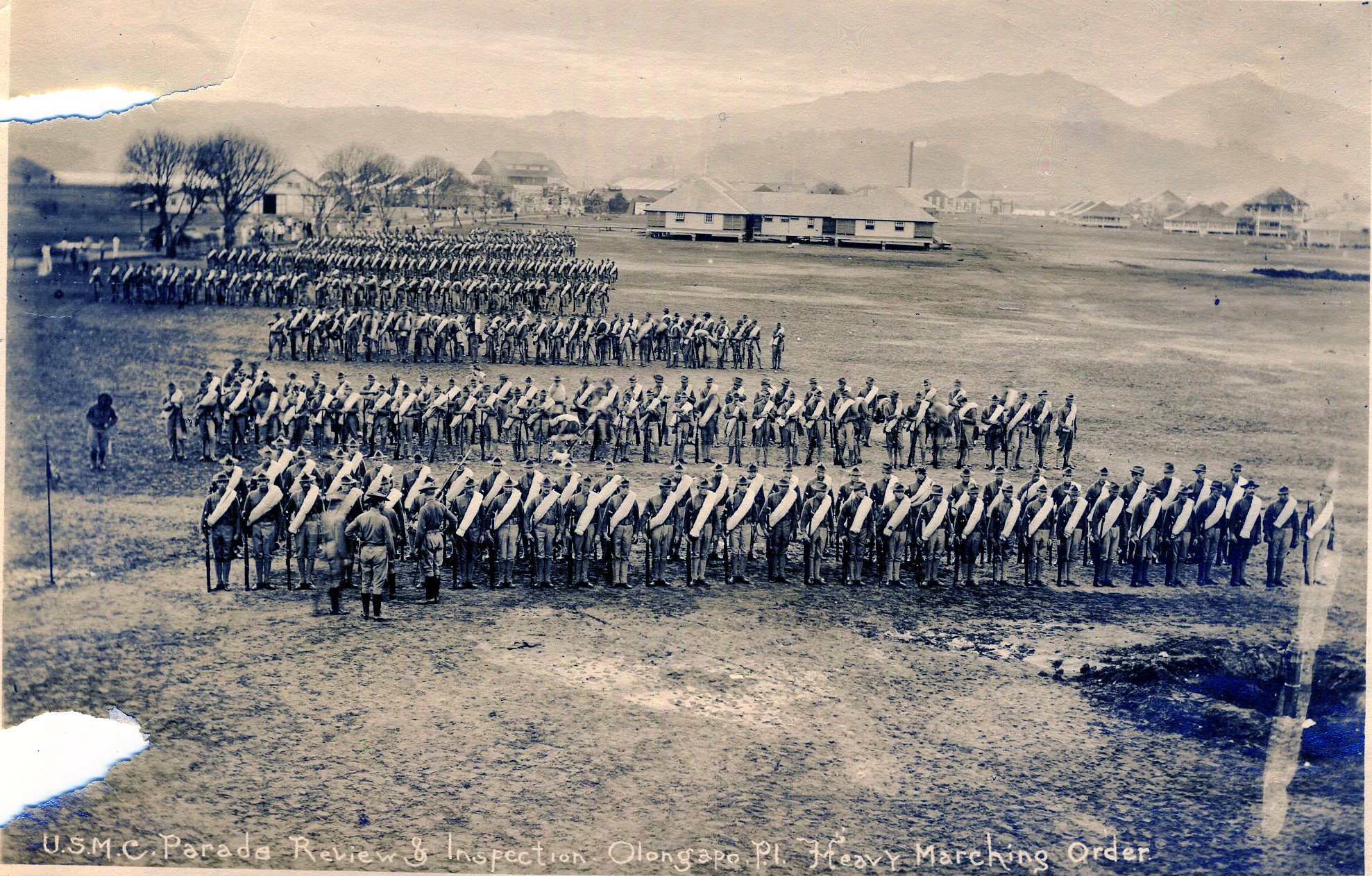 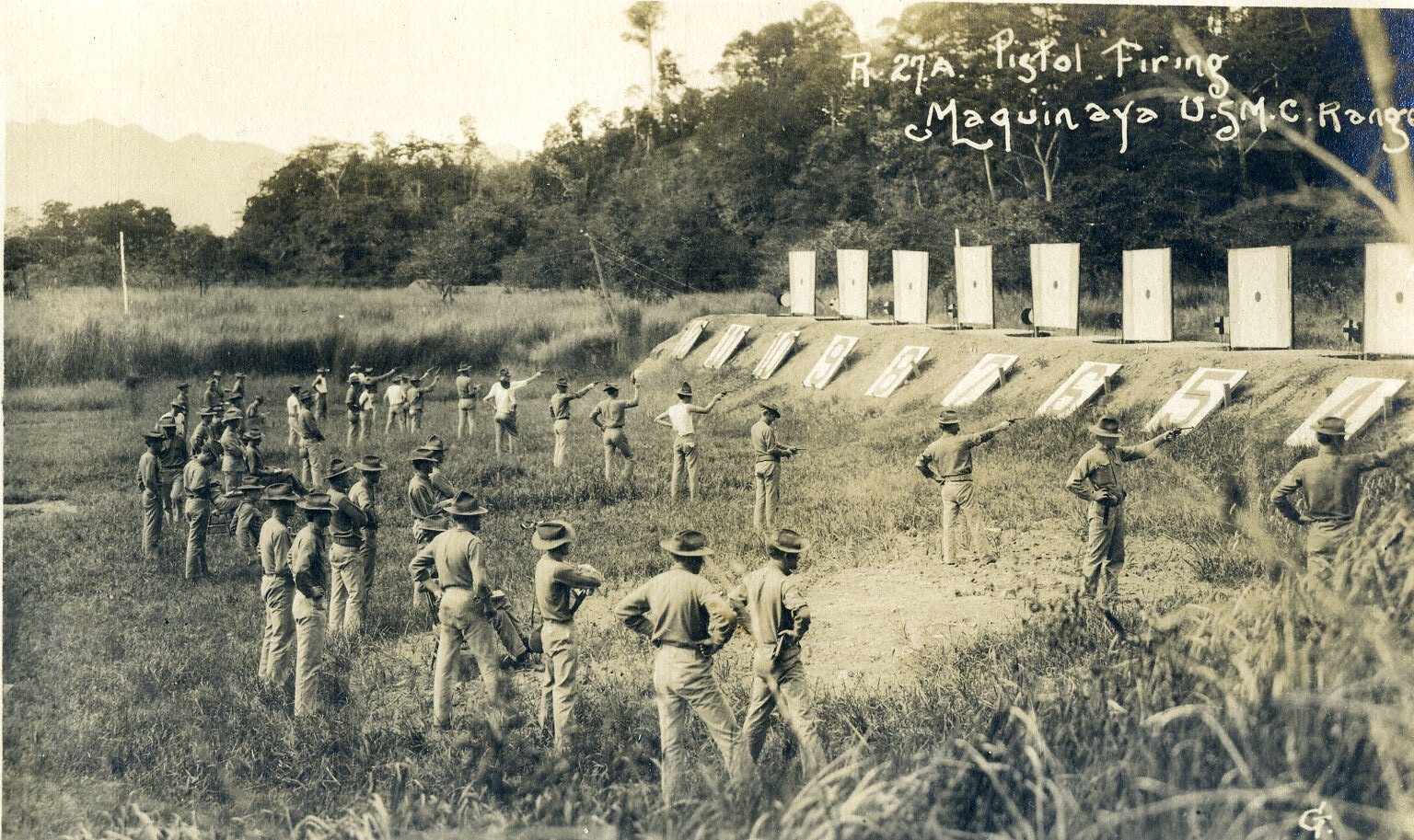 Born 16 February 1879 in New York and, after a stint at Wesleyan, taken into service 3 December 1900 at the rank of 2nd LT, Howard Hapgood Kipp went to the PI in 1909 as part of a detachment of four officers (of which he was the junior) and 100 Marines. He spent the Great War detailed to the Inspector’s Department, having been assigned in 1916 as a Captian at Marine Barracks New York. Promoted to Lt. Col. 11 February 1924, his name was added to the retired list 3 January 1927 having served two years, nine months at sea as well as 12 years, five months on foreign service. He died in 1940. His wife, Katherine “Kitty” Bloodgood, was a vaudeville performer of some note and survived him by 25 years. His son, Hapgood Kipp, born in 1907, was accepted to Annapolis while his father was still on active duty, and passed away in 2000.

James Stanley Monahan, born 24 September 1896 in Colorado, seems to have been accepted into the USNRF as an ensign on 6 July 1918, serving 1 year, 11 months, and 23 days. Accepted as a 2nd LT with the Marines on 6 April 1921, Cavite was undoubtedly his first overseas duty as a Devil. Monahan later served as a major with the “Magnificent Bastards” of 2nd Battalion, 4th Marines in 1940 and by October 1942 earned his own battalion, given command of the “Island Warriors” of 2/3 Marines on the lead up to Bougainville. He was a light colonel listed as XO of the 1st Marines for the assault on Iwo Jima then later, after the assault, moved up to head the HQ Battalion of the 1st MARDIV. Monahan– like his old Cavite boss Kipp– was placed on the retired list as an LTC, 1 January 1947. His son is the well-known San Diego attorney David Emory Monahan.

As for Cavite, the 700-strong 1st Separate Marine Battalion, just 20 years after the above menu was approved, was fighting the Japanese all the way to the Bataan Death March. Today, it remains home to the Philippine Marine Corps as Naval Station Pascual Ledesma.