Here we see a group of Army Aviators clustered around “White 29,” Bell P-39Q-5-BE Airacobra/42-20349, of the “Musketeers” of the 110th Reconnaissance Squadron (Fighter), taken at Tadji Airfield, New Guinea in a photo dated 28 October 1944 (although likely taken as much as four months prior). LT Hunt is listed as the assigned pilot. 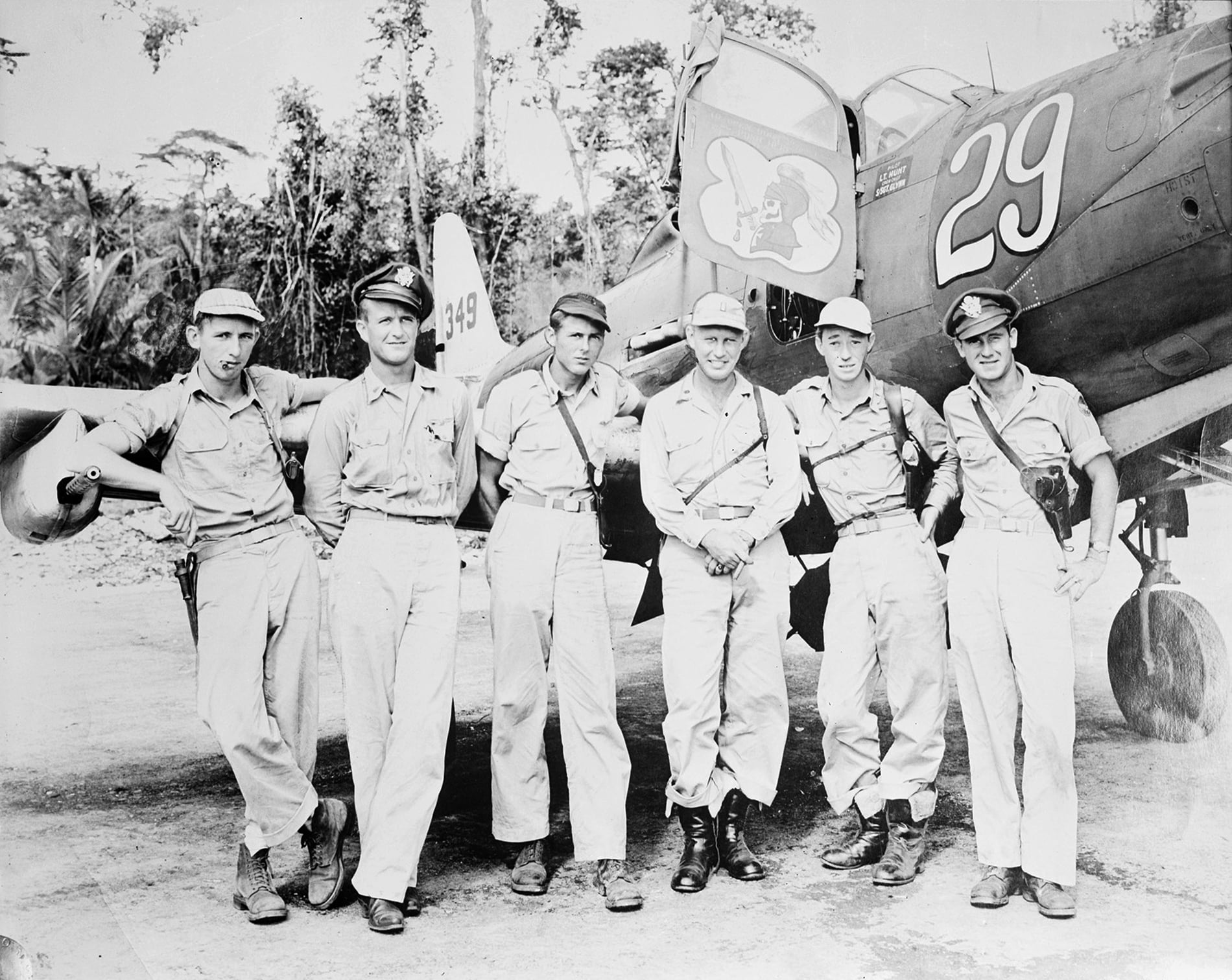 “Texas fighter pilots are pictured here. Left to right, they are, First Lieutenants Daron M. Reedy, Henry E. Parish, Wilkins W. Hunt, Junior (Jr.), Michael L. Evans, L. H. Williams, and Van Kennon. Six men wearing uniforms are posing by a fighter plane. On the door of the plane is a skeleton wearing armor and holding a sword with dripping blood. The number 29 is on the nose of the plane and in a small box it says Pilot LT. HUNT Crew Chief S/SGT GLYNN. The tail of the plane has the number 349 on it.”

Beginning WWII equipped with Douglas O-38 biplanes and the lumbering North American O-47, they were rushed to California after Pearl Harbor to conduct anti-submarine coastal patrols.

Upgrading to a mix of P-39Q and P-40N armed photo birds in 1942, the squadron embarked for Australia and then New Guinea where they became operational in December flying, in turn, from 5 Mile Drome at Port Moresby, Gusap Airfield, and Tadji before moving onto Biak, the Philippines, and the Ryukyus by the end f the war. By that time they were using super sexy F-6D Mustang photo birds.

Don’t let the recon aspect of their service fool you, by the end of the war the unit counted across 437 days in combat some 21 air-to-air victories, 102 aircraft destroyed on the ground, 2.8 million pounds of bombs dropped in addition to 14,000 gallons of napalm, and over 3.2 million rounds of ammo expended– including 41,835 37mm cannon shells from the nose of their Airacobras.

Redesignated a bomber outfit after WWII, today the unit is the 110th Bomb Squadron, flying the B-2 Spirit out of Whiteman AFB, Missouri, and is known as “Lindbergh’s Own” due to the fact that a young Charles A. Lindbergh was a junior officer in the unit from 1924 to 1929, including the period when he made his famous trans-Atlantic flight.