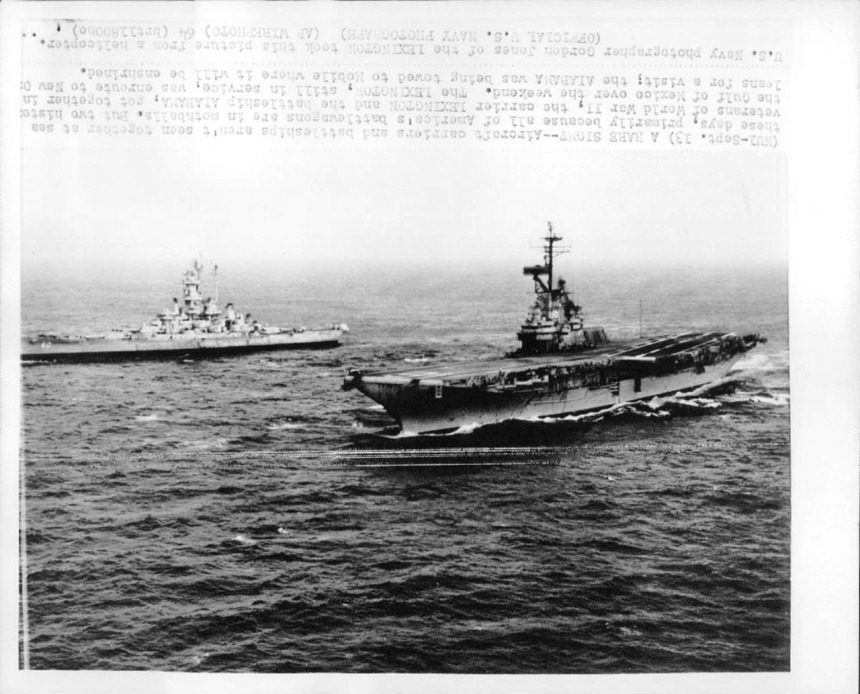 “Sept. 13[1964] A RARE SIGHT—Aircraft carriers and battleships aren’t seen together at sea these days, primarily because all of America’s battlewagons are in mothballs. But two historic veterans of WW II, the carrier Lexington and the battleship Alabama got together in the Gulf of Mexico over the weekend. The Lexington, still in service, was en route to New Orleans for a visit; the Alabama was being towed to Mobile where it will be enshrined.”

Alabama (BB-60) had a short but safe career in the Navy. Commissioned  16 August 1942, she earned 9 Battle Stars for her work in the Pacific before entering red lead row on 9 January 1947 at the ripe old age of four. Stricken in 1962, she has been preserved since 1964 at the Battleship Memorial Park in Mobile Bay.

Lexington, (CV/CVA/CVS/CVT/AVT-16), is actually younger than Alabama, commissioned 17 February 1943. Recipient of the Presidential Unit Citation and 11 Battle Stars, she saw hard service in WWII and the Cold War (after a 8-year lay up) before becoming the Navy’s dedicated training carrier in 1969. Decommissioned/stricken on 8 November 1991, she has been preserved at the USS Lexington Museum on the Bay in Corpus Christi, Texas.

Hence, the 1964 photo was a harbinger of things to come, as both endure as silent gray sentinels, the last of Halsey’s capital ships on the Gulf Coast.