Borrowing an idea from the French and Spanish, and in an ode to the foreign volunteers who flocked to Finland to fight the Soviets in 1939, the Ukrainian government is being deadly serious about forming their own unit of foreign-born fighters as part of their military.

They even have a website with detailed information and a seven-step process. 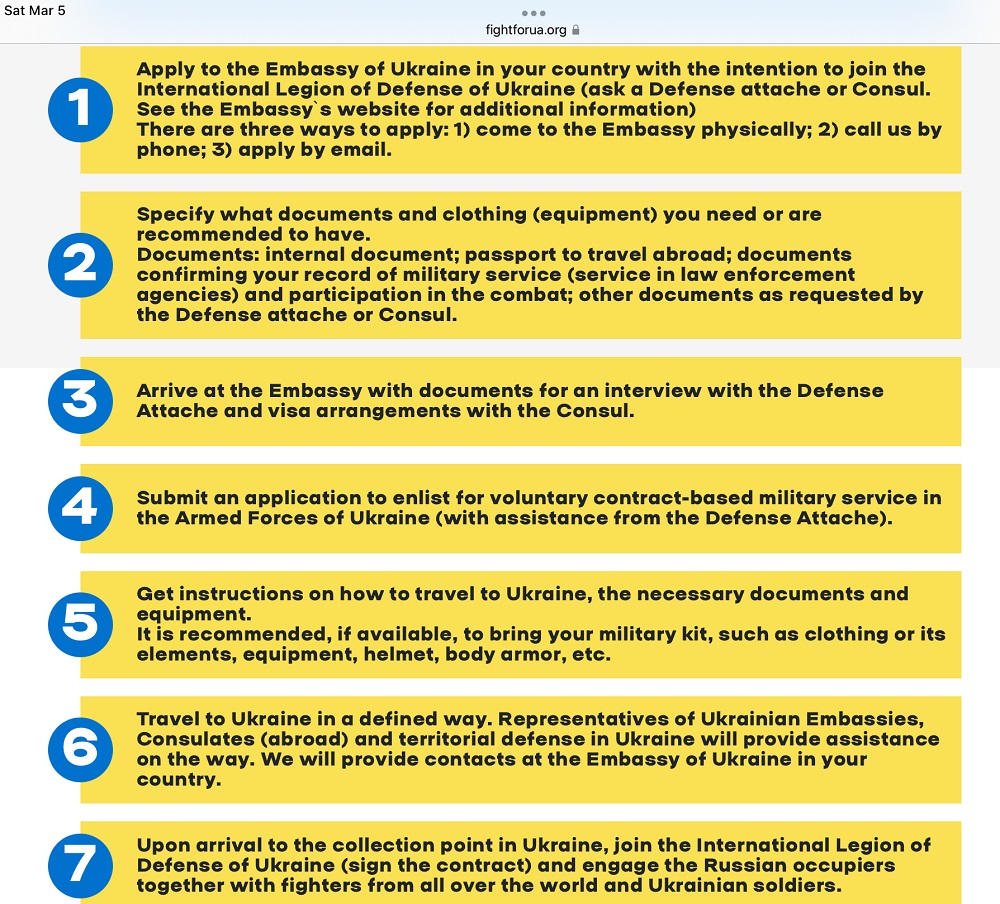 Of note, the French Foreign Legion is telling their members to stay put, that they (and their contract) are honor-bound to remain in the force, with their first loyalty not to any country (even France) but to the Legion. Of the elite force’s 9,500 members, some 710 are of Ukrainian origin of whom 210 have been naturalized, and there are some 450 Russian-born troops as well. General Alain Lardet, the Legion’s COMLE, issued a rare public video to the force explaining that, while the country will make allowances for an impacted member’s family to come, and two-weeks leaves for those from the warzone will be allowed, the Legionnaire himself needs to remain in his unit and honor their commitment.

The Legion has reported only 25 desertions by Ukrainian-born soldiers.

Ky’iv says some 18,000 foreign volunteers have arrived in Ukraine or have contacted overseas representatives.

Reportedly, some 100 South Koreans including former ROK Navy SEAL Lieutenant, LT Ken Rhee, have left for Ukraine, risking a year in prison as Seoul has placed such travel off-limits.

From outside London’s Ukraine embassy, with a mix of experienced and inexperienced signing up, for better or worse:

A more sober take from a British vet:

One American combat Veteran, a former 82nd Airborne guy, has been living in Ukraine for the past year and has already signed up a month ago with the Georgian Foreign Legion, according to an interview.

Speaking of volunteers from Georgia– who have had their own run-ins with the Russians in recent years– dozens of men recently gathered outside Ukraine’s embassy in Tbilisi to sign up.

Meanwhile, in Washington D.C. at least one eager volunteer was arrested by the local authorities with a gun near the Ukrainian embassy. While the Ukrainian military attaches are wanting volunteers to provide as much kit as possible, this does not extend to firearms apparently.

It seems those who have made it to Ky’iv already are able to arm up.

Via Battles and Beers: War Stories, a blog that has been chronicling the conflict via emailed interviews with those on the ground, a warning sign that only those with lots of experience should even think about it and neophytes should not apply:

*Professionals*
“Advice to volunteers: This isn’t a game. What we are witnessing is a scale of combat that’s unprecedented in modern times. I’m an infantry veteran of the battles of Fallujah and Ramadi and even I’m questioning my qualifications for this. If you aren’t a professional soldier, don’t get involved.
Watching YouTube videos and receiving civilian level training just isn’t good enough. I’m sorry, I know you want to help, but it’s not good enough. You can help more by staying out of it.
Your ignorance of conventional warfare will get yourself, or those around you killed. Light discipline. Crossing danger areas. Treating sucking chest wounds. Self-aid, buddy aid. Max effective ranges. How to dig a fighting position and not get your head shot off. I saw this in a comment on here and I’ll repeat it. I don’t walk into a bank robbery and pretend I’m a police officer. I don’t walk into a plane and pretend I’m a pilot. I don’t walk into a fire and pretend I’m a firefighter. To be a GOOD, USEFUL soldier takes at least two full years of active military training.
Leave this to the professional soldiers and medics. You will seriously help MORE by staying HOME. Don’t get killed or get someone else killed because you want to brag about how you “were in the big one”. You had your chance to volunteer and receive professional training for the last 8 years. You missed it. Oh well. You wouldn’t hop in a fighter jet and try to fly it, why would you hop in a trench and try to be a soldier?”
– Former US Marine. Observer. Invasion of Ukraine, March 1st, 2022