That muzzle device, tho

Labeled the “Combination policeman’s truncheon and extension pistol-barrel,” by its WWI-era inventor, Edward Norton Moor of Oakland, California, the device shown above is a hollowed-out impact weapon capable of coupling to the end of a revolver while still allowing the handgun to fire.

Not intended as a suppressor — an iffy prospect for most revolvers other than the gas-sealed Nagant M1895 and similar — Moor’s 1916 patent application for the device says plainly that, “The object of the invention is to provide an improved form of a policeman’s truncheon which will serve as a barrel extension of a pistol.” 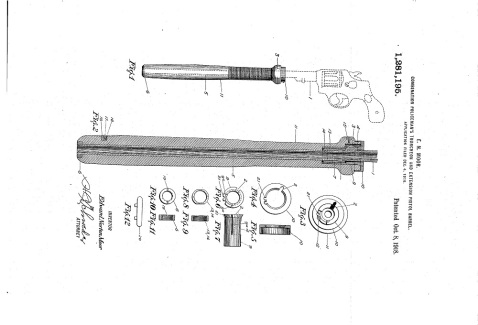 Moor also registered patents on a number of other barrel extensions in the U.S. and France, as well as a fishing pole. (Photo: Google Patents)

I can’t find a reliable source for just how many of Moor’s devices were made, but, at least a few examples were produced by the Automatic Screw Company in California, with a 1919 patent date.