Here at LSOZI, we are going to take out every Wednesday for a look at the old steam/diesel navies of the 1859-1946 time period and will profile a different ship each week.
– Christopher Eger

Here we see the Imperial Japanese Navy’s heavy cruiser HIJMS Takao with a bone in her teeth at high-speed.  The Japanese had named her after the old 1880s era Takao, a 1700-ton cruiser that had served at the Battle of Weihaiwei against the Chinese and at Tsushima against the Russians. The new ship was one of the premier heavy cruiser designs of all time, the Takao was the lead ship of a 4-vessel class of very large all-gun warships. Designed in 1927 just after Japan nodded and winked at the London Naval Treaties and before the Washington Naval Treaty that limited cruiser size to 10,000 tons, the Takao class were a beast at almost 15,500-tons when fully combat loaded. Her and her sisters were fast (35-knots) and as such could outrun any battleship or battlecruiser in the world. 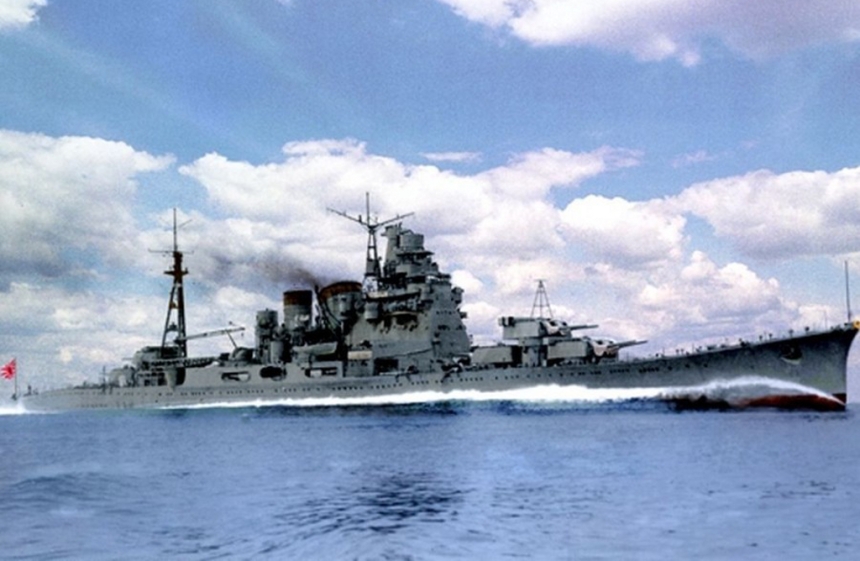 They were also heavily armed with ten 8-inch 20 cm/50 3rd Year Type naval guns, with a 70-degree elevation that was influenced by the British  Royal Navy County class cruisers. The ten gun layout, in five twin turrets, was very distinctive. These guns could fire a 280-pound Type 91 armor-piercing (AP) shell to 18-miles, making short work of any smaller ship.

Takao had long legs and could cross the Pacific and back or sail to Europe on only the fuel in her bunkers. A staggering 80+ antiaircraft guns and 16 torpedo tubes made her a threat to both planes and ships. Those tubes carried Type 93 (Long Lance)
torpedoes, 2.8-ton 610mm wide steel fish almost 30-feet long that could travel 52-knots and deliver a 1,100 lb warhead to an enemy ship at ranges over ten miles away. 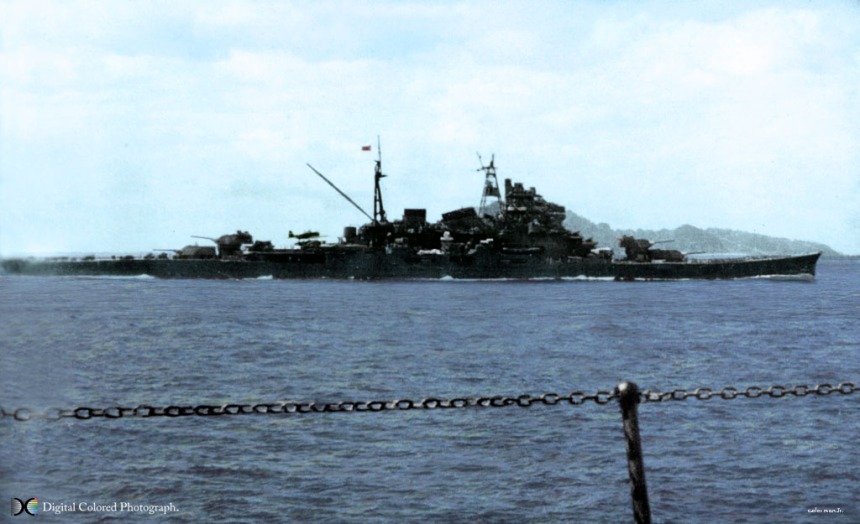 In short, she was 15,000 tons of bad dreams to the US, Australian, British, and Dutch navies when she was commissioned May 31, 1932. They had nothing like her.

When WWII started, she was everywhere: 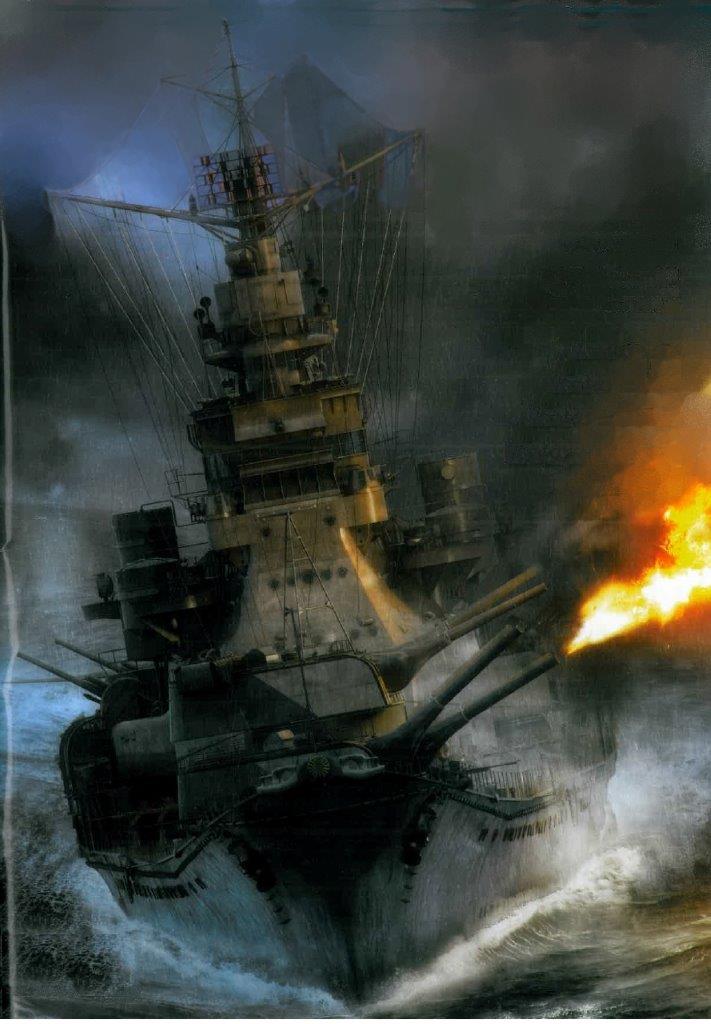 Then things started going bad for the Emperor’s ‘lucky’ cruiser. Dauntless dive bombers from the USS Saratoga, herself a converted battlecruiser, found Takao during the retreat from Guadalcanal and gave her a good licking in 1943. Then, in October 1944 while on her way  to probably be sunk in the Philippines, she sucked up two torpedoes from the USS Darter, a  a Gato-class submarine, which won Darter‘s commander, David Hayward McClintock, the Navy Cross and the sub a Navy Unit Commendation.

These hits made the Takao limp back to Singapore where she sat as a brooding hot mess for nine months as something of a fleet in being. Her guns still working, but her propulsion plant wrecked, she could still protect the occupied British colony city from Allied attack. There, in an attack codenamed Operation Struggle, a British XE-class submarine ended the Takao‘s war.

The XE-class was the same 53-foot long midget boats that sank the Tirpitz in Norway earlier in the war. In August 1945, HMS XE1 and XE3 executed a joint attack on Japanese warships within Singapore harbor. XE3 was tasked with mining the heavy cruiser Takao while XE1 was to attack the heavy cruiser Myōkō. 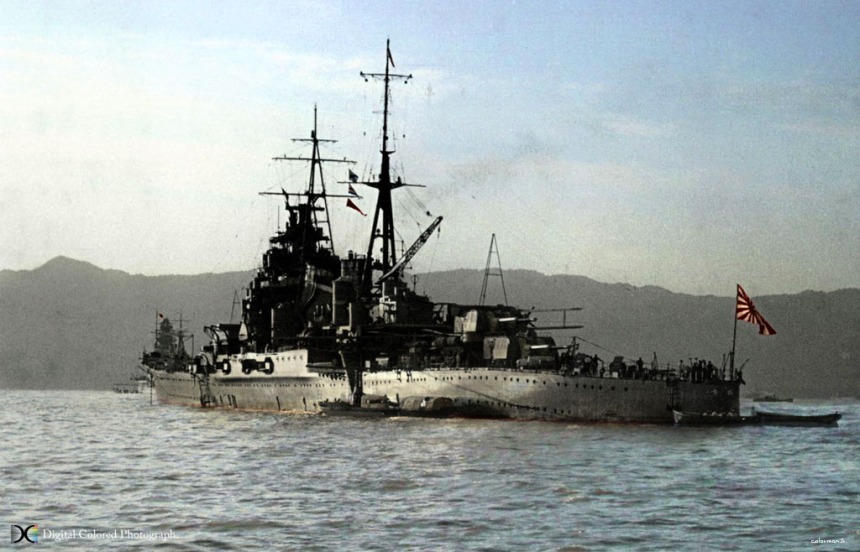 The approach of XE3 along the Straits of Johor and through the various harbour defences took 11 hours plus a further 2 hours to locate the camouflaged target. Despite several opportunities for Japanese defenders to spot the vessel, XE3 successfully reached the Takao, fixed six limpet mines and dropped its two, 2-ton side charges. The withdrawal was successfully made and XE3 safely contacted HMS Stygian, the escort submarine. Meanwhile the crew of XE1 had failed to find their target. Instead, and knowing that the explosives already laid could explode, XE1’s own charges were also laid under the Takao. XE1 escaped successfully just before the combined charges blew the Japanese cruiser’s bottom out.  In all more than 8,000-pounds of charges were used against the cruiser, leaving her incapable of performing any task, the shock-wave having destroyed almost all of her internal machinery from gun hoists to rangefinders to navigation compasses.

remains were sunk at sea off the coast by the  Colony-class light cruiser HMS Newfoundland in 1946. Her wreck lay in deep water today.