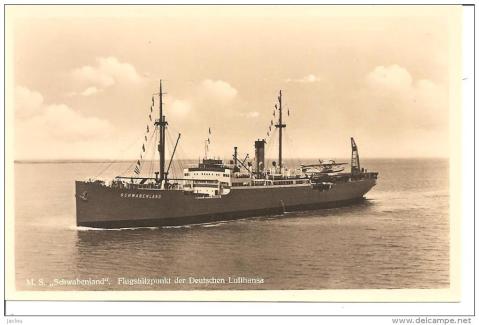 Here we see the one-off Deutsche Luft Hansa catapult ship MS Schwabenland. This sea monster would carve a unique place for herself in maritime history.

Built for the DDG Hansa line to help replace cargo liners sunk during the Great War, she carried the name Schwarzenfels and was a 7,894-ton freighter designed for economical service between Bremen and India.

Capable of carrying 10 second-class passengers in addition to her cargo, her 2 six-cylinder four-stroke diesel engines could chug along at 12-knots for over 10,000 nm. The first of her class, she was accepted into commercial service 16 July 1925 after completion at Deutsche Werke AG, Kiel.

Her design was considered successful, with sister ships Neuenfels, Weissenfels, Braunfels, Rotenfels and Altenfels commissioned by 1927.

However, the burgeoning German airline Deutsche Luft Hansa (now just known as Lufthansa) purchased Schwarzenfels (renamed Swabia) from DDG Hansa on 28 February 1934 and, along with the 1905-circa cargo ship Westphalia (5,098-tons), were converted at AG Weser in Bremen for use as catapult ships for seaplanes for the Lufthansa-Postdienst service in South America.

Under the plan, the freighter would be converted to accept a steam-powered Heinkel K-7 catapult (which raised her tonnage to 8,188) capable of launching a 10-ton Dornier J Katapultwal (Catapult Whale) seaplane aloft.

One of these…seen in Bathurst, Gambia

The two catapult ships would serve mid-ocean and refuel the giant seaplanes along their route from Bathurst, Gambia (West Africa) to Stuttgart, Germany via Natal, Brazil. This service, launched in late 1934 allowed mail to get from South America to Germany in as little as three days– the world’s first regular intercontinental airline service.

The immense Whales would taxi up to the waiting catapult ship, be hoisted aboard, refueled, their crew changed, and then launched back on their way.

However, the scheme was short-lived, with just six Katapultwals in service and other, all-plane routes, later put into service by 1938 which proved faster.

But, Swabia had been relieved on station long before that by the newly built seaplane tender Ostmark.

Blohm & Voss Ha 139 on board of the Schwabenland

With Schwabenland “catching” Ha 139s from Portugal, and launching them to Nova Scotia or New York, where another Lufthansa catapult ship, Friesland, would receive and turn back around, the German airline service completed some 50 cross-Atlantic flights over an 18-month period with the 139s, as well as sending a truly leviathan four-engine Dornier Do 26 on a flight from Europe to Africa.

A giant Blohm & Voss Ha 139, a huge all-metal inverted gull wing floatplane with four 447kW Junkers Jumo 205G diesel engines. Just three of these were made. Photo via Diesel Punks, which has a great write up on these.

Blohm und Voss Ha 139 D-AMIE Nordmeer is launched by the Schwabenland’s catapult in 1937. For reference, the span of these giant seaplanes is 96 feet, just eight shorter than a PBY Catalina. They could carry 500 kg of mail some 5,000 km 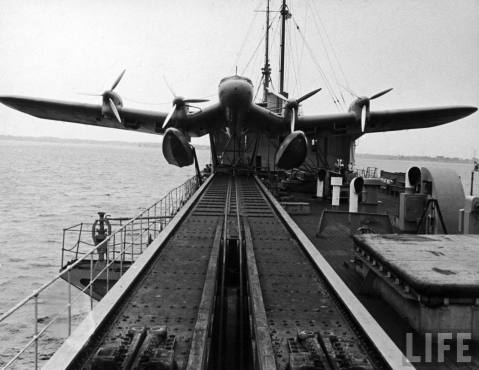 MS Schwabenland about to launch a Ha 139 from it’s catapult, 1937. Life archives

In the fall of 1938, Schwabenland was pulled off her regular duties and sent very far south, the North Atlantic postal service ended. 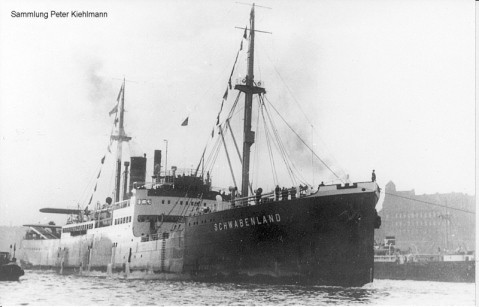 She became part of the Third German Antarctic Expedition (Deutsche Antarkitische Expedition, 1938-39) with two Dornier Do18s, D-AGAT Boreas and D-ALOX Passat, along with 82 scientists and aircrew carried aboard to include the visiting American polar explorer Richard E. Byrd. 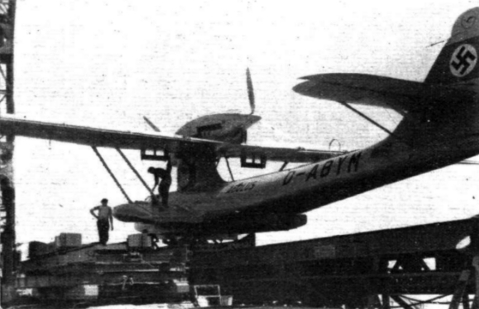 German Lufthansa Dornier Do 18E flying boat (D-ABYM “Aeolus”) on the catapult of MS Schwabenland. The standard German seaplane of early WWII, they could fly 1700nm and carry a pair of light machine guns and bombs. Some 170 were built but only about half that many served in WWII 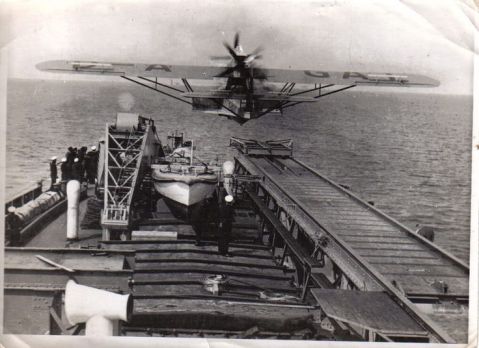 Under the command of Kapitän Alfred Ritscher, Schwabenland left Hamburg 17 December 1938 and was off the coast of Antarctica by February 1939. Conducting interactions with the German whaling fleet, the two Wals scouted the pack ice and far inland on 15 lengthy flights, taking thousands of kilometers of film as they overflew the frozen continent.

The Germans laid claim to a portion of the great barren waste (between 20°E and 10°W in Queen Maud Land), naming it Neuschwabenland— after the ship. The more than 16,000 photos obtained took decades to process.

With a war looming, Schwabenland quickly returned home and by October 1939 had been taken up into Luftwaffe service as a plane tender for use with a host of three-engined Blohm & Voss BV 138 Seedrache (Sea Dragon) seaplanes, and given an AAA battery of 8x 20mm singles. Soon, she was operating off France.

By September 1942, she was in Norwegian waters with her BV138s along with her old Lufthansa catapult ship buddy, Westfalen.

She spent most of the war operating Blohm & Voss BV 138 Seedrache (Sea Dragon) seaplanes, such as this one. In production after 1940, these planes could carry several small bombs or depth charges to a range of 2600nm, and were among the smallest Schwabenland ever carried.

She sailed towards Eastern Greenland on a rescue mission where she supported one of the two remaining Dornier Do 26 flying boats on two flights (7 and 17 June 1943) to evacuate the 14 meteorologists and radiomen of weather station Holzauge before the USCG could track them down.

Only six Do 26 – Transocean Flying Boats were made, and Schwabenland was very connected with them. None of these giant planes survived the war, indeed four had been destroyed before the 1943 weather station rescue

The met group had been found by a Danish sled dog patrol and the gig was up. Had it not been for the epic and unsung mission, the Holzaugers would have cooled their heels in a POW camp in Arizona for the rest of the war.

On 24 March 1944, Schwabenland was torpedoed by the British T-class submarine HMS Terrapin (P-323) off Egersund, Norway but was able to limp to pier side. Towed to Bergen, she was further wrecked by an RAF raid there in October. After that, she was suitable only as a floating storage dump.

But of course, the mystery of the Germans in Antarctica far outlived the ship, with all sorts of conspiracy theories advanced for generations about secret Nazi bases among the ice– including that Byrd’s postwar Operation High Jump was an effort to go back and root out said Nazis.

For the debunk on this, here is a 21-page paper with lots more info on our humble catapult ship.

Via Shipbucket with a pair of Seadragons on deck. Note her 20mm AAA guns