Looking for a detachable box mag Remington 870, right from the factory?

This week, Remington debuted a new offering on the tried-and-true 870 pump brings a three- or six-shell detachable magazine to the mix on each of a half-dozen new variants. Each 12-gauge ships with a single proprietary six-shot mag with the exception of the 870 DM Tactical /Predator — which sports Kryptek Highlander camo and is billed as a turkey and hog gun– that includes both a three and a six-shot detachable box, though Remington advises additional magazines will be available for purchase.

Shown above is the 870 DM Magpul, the model first to hit the market, includes a Magpul SGA stock and MOE M-Lok forend with a Super Cell recoil pad. The 18.5-inch Rem Choke barrel includes an extended ported tactical choke and is equipped with XS steel front and ghost ring rear sights, the latter mounted on a Picatinny rail section above the receiver. MSRP is $799

More in my column, and details on the other five variants, at Guns.com.

Of course, some have been in this game for a while. For instance, Black Aces Tactical posted, “Remember. No matter what you see or here tonight or in the days to come, you saw it here first. We’ve been at it for years. We’ve got it nailed.” 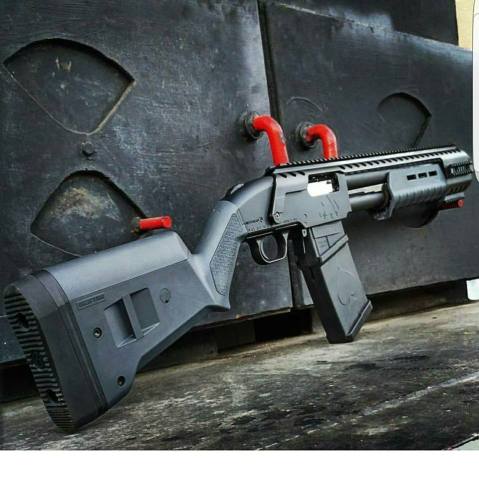 As for if it evolves into a patent dispute, that remains to be seen.