So I’m in Las Vegas for SHOT Show

Found this on the range and, despite it’s odd recoil impulse and sometimes confusing weapon manipulation, is very interesting in a 1960s High Standard HS10 kinda way. I give you the IWI Tavor TS12, a bullpup semi-auto shotgun with a 15-shot capacity. 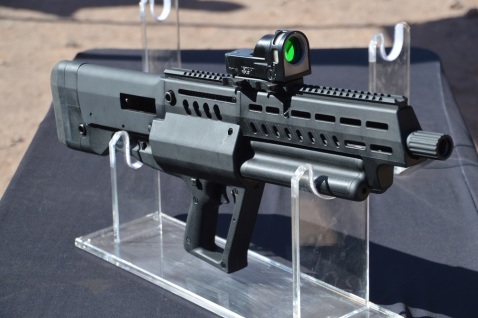 The Israeli shotgun uses a trio of 5-shot (using 2.75-inch shells) tubular magazines that automatically loads the next round in the 3-inch chamber when the mag is rotated into place. When using 3-inch shells, the capacity drops by one shell in each mag. The 18.5-inch barrel is threaded for Benelli or Beretta chokes and one is included. Weight empty is advertised as being 8 pounds. The shotgun includes a one-piece Picatinny top rail and M-Lok slots on the forward handguard. The ambi design allows the user to swap out for left or right controls and ejection.

And there is also this thing, which shoots very well, but they still aren’t letting on how it is done. I am still on record that it uses a form of rifling that isn’t considered such by BATFE. We shall see.

Also, no Warship Wednesday tomorrow. Sorry gang. Will rejoin WW already in progress next week. The past two weeks have been swamped. If I don’t make it back alive, you know the drill: avenge my death.