Here at LSOZI, we are going to take off every Wednesday for a look at the old steam/diesel navies of the 1859-1946 time period and will profile a different ship each week. These ships have a life, a tale all of their own, which sometimes takes them to the strangest places.- Christopher Eger.

Note: Normally on WSW we cover more legit steel “warships” and, while today’s entry is a wooden commercial vessel that only ever picked up an engine late in life, she did play an important part in WWII, and her current story is timely, so bear with me. 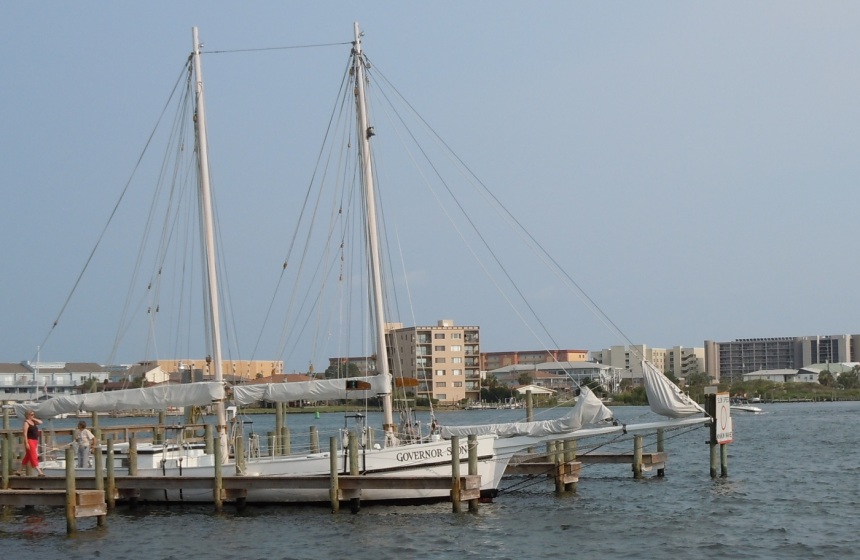 Here we see 66-foot (over the bowsprit) wooden-hulled Gulf Coast-style schooner Governor Stone as I saw her in Ft. Walton in 2011. In another life, she helped train young men to brave German U-Boats and Japanese kamikazes and last week faced off one of the most powerful hurricanes to hit the United States in generations.

The two-masted centerboard schooner was built in 1877 in my hometown of Pascagoula, Mississippi, a sleepy coastal city that later produced Ingalls shipyard which still, of course, cranks out vessels of all kinds today. Some 39-feet at the waterline with just a 3.9-foot draft, she was built to fly along the shallows of the Mississippi Sound– which has an average depth of just six feet– as a cargo hauler.

Her keel was of yellow pine with cypress frames and planks while her decks and bulwarks are of white pine and juniper.

With a gaff-rigged topmast sail plan, her longleaf yellow pine main towered 52 feet from waterline to topmast truck. Her steering gear, windlass, and other working pieces were and remain cast iron.

Her original 1877 steering gear was still intact into the 2010s, although in a new box (Chris Eger)

Ordered by Pascagoula merchant Charles Anthorn Greiner to haul materials to and from his sawmill on the Pascagoula River to deep water vessels offshore, the vessel was named for his personal friend, Gov. John Marshall Stone. A Civil War colonel, Stone served longer as Governor of the Magnolia State than anyone else– from 1876 to 1882 and again from 1890 to 1896.

However, Greiner soon sold the schooner for $425 to Mulford “Mul” Dorlorn of nearby Dauphin Island, Alabama at the mouth of nearby Mobile Bay who used her to carry freight and as a “buy boat” purchasing oysters from “tongers” in the beds along the Rigolet Islands, the latter a job she held under a series of owners for the next 30 years. 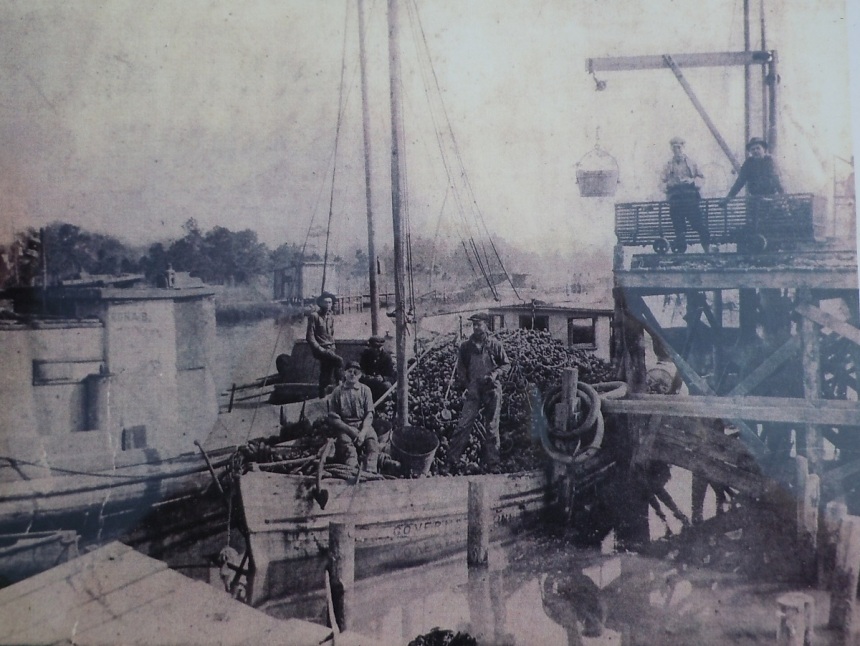 During her “oyster days” (Chris Eger)

In September 1906 she was caught in Bayou Heron, now part of the Grand Bay National Estuarine Research Reserve, during a fierce hurricane that capsized the schooner and rolled her 300 yards into the marshy estuary.

Recovered and repaired, she went back to work. Picking up a small 16-hp gasoline engine and a small screw in 1923, she was powered for the first time in her then-46 year career, then pressed into service by her owner Thomas Burns as a bootlegger during Prohibition, reportedly making two trips a month for $500 a run bringing in good Cuban rum to a hungry market in Mobile, Biloxi and New Orleans.

By the 1930s, during the Depression, at a time when cheaper catboats and luggers had cornered the local market and the deep port at Gulfport had eliminated the need for offshore lightering, she became a derelict vessel. In 1939 she sank in Bay St. Louis, Mississippi.

In 1940 she was raised and, refitted with a new 50-hp Gray engine, was extensively overhauled by local innkeeper Isaac T. Rhea who named her Queen of the Fleet and used her as a day tripper for guests at his famous Inn By The Sea beachside resort in Pass Christian. As such, she was given a large deck structure. 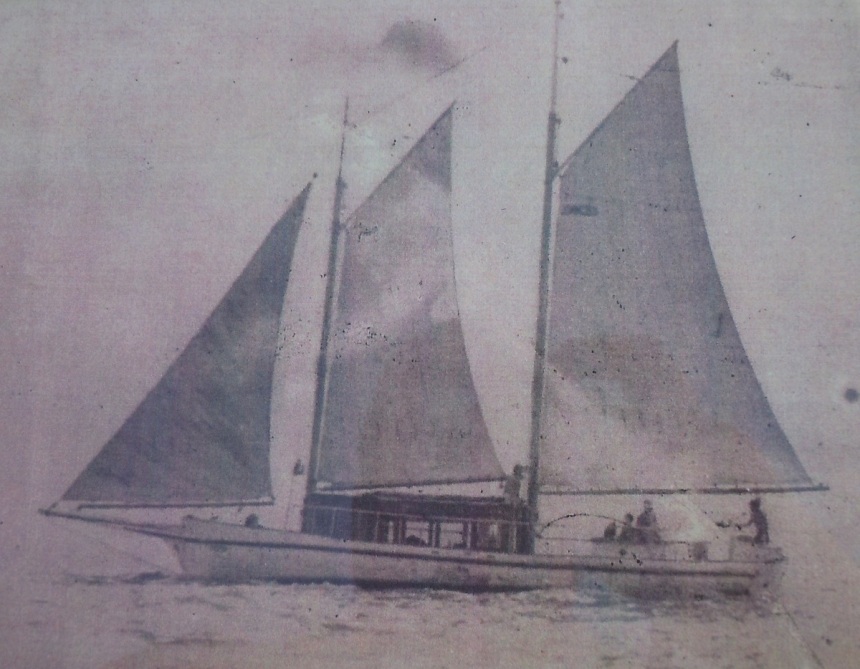 Then the war came.

On 15 September 1942, she was purchased for $1 by the US War Shipping Administration and was converted for use as a training vessel by the Merchant Marine Academy which had the same week founded two cadet basic schools to educate merchant marine officers in the on-going conflict. One of the schools was at San Mateo, the second was at Henderson Point (Rhea’s Inn By The Sea, which had been purchased lock, stock, and barrel by the government) in Pass Christian.

She became the training vessel Joshua Humphreys during the war, named after the famous naval architect and constructor of the original “six frigates” of the United States Navy. 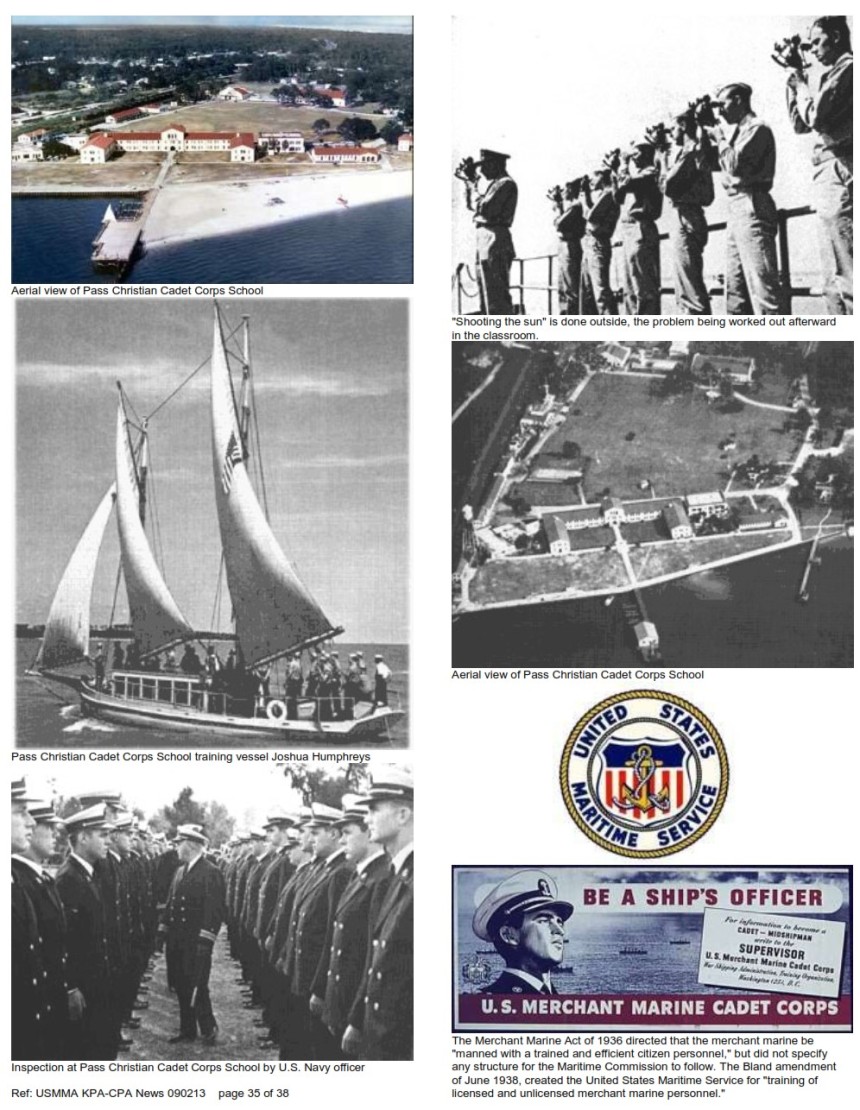 (Via the USMM Alumni Association)

According to local historian Dan Ellis:

Cadet training consisted of basic seamanship, ship nomenclature, elementary ship construction and identification of friendly and enemy vessels and aircraft. They were also taught first-aid and safety, abandoning ship procedures, ship handling and navigation maneuvers, and the use of, and marksmanship of, 20mm and .50 caliber guns.

After spending nine months at their academies, the cadets went to sea on merchant ships to finish their education afloat in very real on-the-job-training.

Cadets went to sea with their books and were required to write reports upon return, describing enemy craft seen, damage, lifeboat voyages, acts of heroism, etc. In 450 reports filed, cadets described attacks on 250 different ships, of which 220 were sunk.

By the end of the war, the Academy’s three campuses had graduated an impressive 6,634 officers.

The Battle Standard bears the number “142” on its field of red, white and blue. In its center is the eagle of the Academy’s seal in blue and gray, the school colors, and the anchor of the merchant marine in gold. From its top hang the ribbons which represent the various combat zones in which the Academy’s cadet/midshipmen served.

With the end of the war, the cadets at San Mateo were soon transferred to Kings Point in September 1947, and the school closed. Pass Christian, although devastated by a hurricane in September 1947, remained open until 1950 when the government closed it down and the school was closed, sold to the Mississippi Baptist Convention Board as a retreat. The site is now a condo that borrows Rhea’s restort’s originial name.

The USMMA-AA, with support from Seabee Base, Gulfport, established a memorial to the Pass Christian USMM Cadet Corps Basic School in 1979 on what was then still the campus of the Mississippi Baptist Convention Board. Destroyed in 2005, the memorial and an old ketch sailing anchor salvaged in the area by the Seabees were reconstituted 0.6 miles north of the location in 2013.

The bronze plaque, which I touch up from time to time, reads:

These Grounds, From September 16, 1942 to March 21, 1950, Were the Site of the Pass Christian United States Merchant Marine Cadet Corps Basic School. From Here and the Sister School at San Mateo, California, Over 6000 Undergraduates of the U.S. Merchant Marine Academy at Kings Point, New York, Went to Sea in War and Peace. To Those Cadets, Who in the Course of Their Training or Subsequent Service, Gave Their Lives for Our Country, This Monument Is Respectfully Dedicated.

Back to the Stone

By the time the USMM Academy left Mississippi, Governor Stone/Queen of the Fleet had been returned to Mr. Rhea in 1947 with a brand-new 110 HP Chrysler Marine engine installed, a bonus!

When he died in 1953, the schooner was subsequently sold to a series of six different owners over the next 15 years and named, in turn, The Pirate Queen, Sea Bob, C’est la Vie, and Sovereign, before ending up with one Mr. John Curry who restored her through the 1970s and 80s and planned to base her in Pascagoula as a floating museum ship with her original name. In the end, she was deeded to the Apalachicola Maritime Institute in 1989 “where she served as a sail trainer for at-risk youth and a charter vessel in conjunction with the museum for 11 years.”

Her National Park Service application to place her on the National Register of Historic Places (#85508) was penned in 1990 by noted maritime historian James P. Delgado of all people, which makes her noteworthy in and of itself. As noted in a 2004 article in The Nautical Archeology Society by Kathryn Sikes:

Only ﬁve 2-masted coasting schooners remain within the United States. Of these, only two, Lewis R. French and Stephen Taber (both built in 1871), predate Governor Stone. In addition, Governor Stone is the only surviving 2-masted schooner indigenous to the Gulf of Mexico, and represents Southern contributions to coastwise trade.

In 2010, Governor Stone was acquired by the non-profit Friends of the Governor Stone group who at first displayed her at Ft. Walton, Florida and then, following an extensive restoration in 2013-14 (in Pascagoula!) moved her to Panama City.

That’s where our current story picks up. 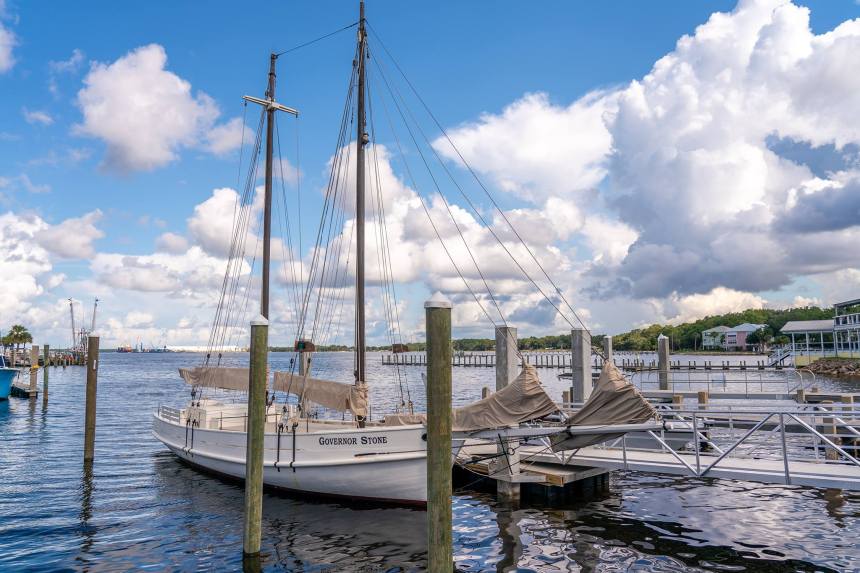 In St. Andrews Marina for Hurricane Michael, she capsized and turned turtle, but is still above water to a degree and the group hopes to salvage her. 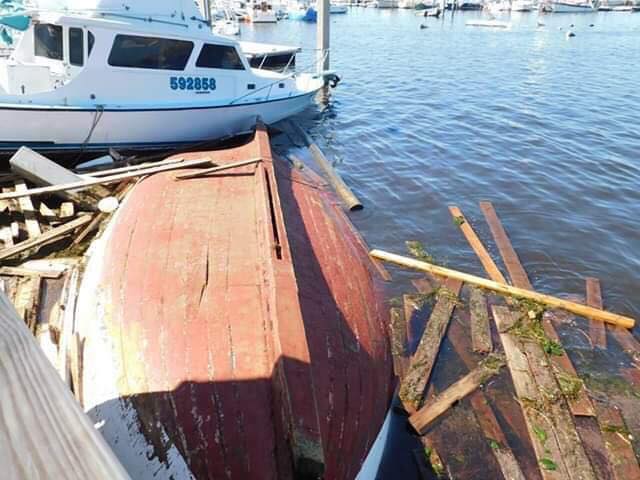 Via Friends of Governor Stone