I have always had a thing for early 20th-century European semi-autos. A weakness if you will–or character flaw, as some would contend. One of the well-liked of these, in Europe, that never caught on over on this side of the pond, is Alex Seidel’s Hahn Selbstspanner modell C (“self-cocking hammer” i.e. double-action, model C) or simply, the HSc.

A young man at the time (Seidel was born in 1909), his HSa, HSb, and HSV all tanked but by 1940 the HSc was put into regular production by Mauser to replace the company’s outdated M1914/34 pocket pistol and compete for sales against Walther’s then new and popular PP/PPK series. 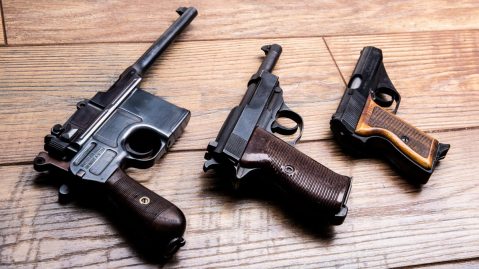 In all, something like 300K HScs were produced through the early 1980s (and the Italians kept making them until the late 1990s) making it a definite commercial success.

In the twilight of the HSc’s production, Virginia-based Interarms imported some of the final batches to the country.

So it was a treat when I found one in the warehouse (check out the article on that here) recently.

As for Seidel himself, he later became involved with HK in that company’s early days and helped invent the claw-type scope mount used on the G3/33/53 and MP5. He also was one of the main characters at play in the design of the VP70, the world’s first polymer pistol.

Look familiar to the HSc? Keep in mind that Seidel was in his 60s when the VP70 was put into production. Also, note the rear stock– a feature similar to the Mauser C96. Some habits die hard