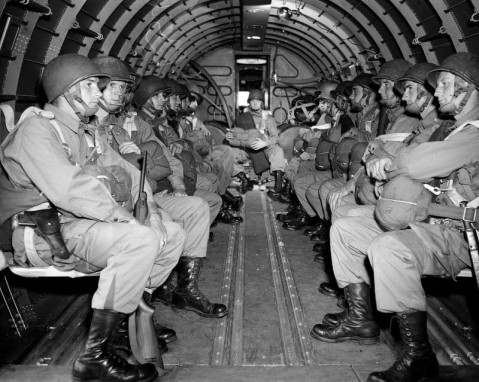 Not a lot of room in a C-47: U.S. paratroopers typically dropped carrying M1/M1A1 Carbines or M1 Thompson/M3 Grease Gun SMGs and handguns. The M1 Garands and M1903A4s carried were done so typically disassembled in a Griswold bag

During WWII, Springfield Armory (the federal arsenal, not the later Illinois-based gunmaker of the same name) worked on an in-house compact version of the M1 Rifle for use by paratroopers (who had to either carry M1 Carbines or various subguns into battle unless they disassembled their larger M1 Garands and reassembled them on landing) and came up with the M1E5.

Using an underfolding stock and an 18-inch barrel (down from the standard 24-inch model), the gun looks unlike any Garand you have ever seen.

Overall length was just 37-inches. Weight was 8.4-pounds, or about a pound less than the regular M1 (Via Springfield Armory NHS)

Just one M1E5 was produced (SN#1) as tests at Aberdeen Proving Ground in May 1944 “indicated weapon accurate at 300 yards, but blast, flash, recoil, and the noise was excessive.”

Meanwhile, at about the same time in the Pacific, ordnance company armorers with the U.S. 6th Army locally converted about 150 otherwise standard M1s by chopping off about 6-inches off the barrel and reinstalling it.

Intending to use these for jungle fighting and for paratrooper use in Operation Olympic/Cornet (the big drops into the Japanese Home Islands) they dutifully sent a few examples back to the States where Springfield looked at them and dubbed the conversion the T26. Col. William Alexander, head of the Pacific Warfare Board, wanted 15,000 made. 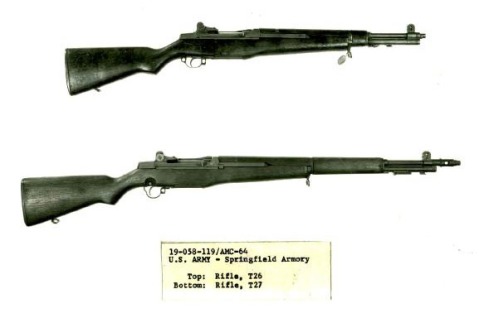 The T26 Garand compared to a more regular sized-M1 variant. According to legend, elements of the 503rd Regimental Parachute Combat Team carried these rifles in the Battle of Noemfoor in July/August 1944.

However, the Armory found in their tests that “the weapon suffered from lack of reliable function, excessive recoil, and excessive muzzle blast,” and would need extensive redesign as the operating rod would have to be shortened due to make the rifle cycle reliably. In the end, the A-bombs cut the war short and the big push into Japan in late 1945/early 1946 wasn’t needed. This ended the T26 program in October 1945.

Nonetheless, often badly chopped and unreliable (see comments on a needed redesign, above) commercial “Tanker” model Garands showed up throughout the 1960s and 70s, building on the legend of the shorty M1 while at the same time burying it in crappy performance.

Fast forward to this week, and Springfield Armory (the Illinois-based company, not the storied federal arsenal) announced their M1A Tanker model. The rifle builds on the company’s proven .308 SOCOM 16 action with a detachable magazine and couples it with a walnut stock. It actually looks pretty nice and its huge muzzle brake will likely trim some of that blast.

More on the newest stab at a compact M1 in my column at Guns.com.

One response to “Springer scratching that Tanker itch”