Looking for a deal on LE trade in tactical Tupperware?

Police trade-in guns are often a good deal. Carried often, they have cosmetic issues such as a worn finish and grips. Cleaned infrequently, they often have crud build-up in nooks and crannies such as the takedown lever and sight grooves. However, these guns often only got taken to the range infrequently– even departments that are very conscious of training and stay on top of qualifications only shoot 3-4 times a year, running about 50 rounds during each event. This means that, while a police-issue handgun after a decade of use (during which it was probably only issued for something like 2/3rds of that time) may look gnarly, it probably is a low mileage gun with well under 5,000 rounds through it.

My 1970s Italian police Beretta 92S runs great– but I made sure to change out all the springs when I got it just in case. Don’t knock LE surplus guns

The G19s seem to all have come from the Asheville (NC) Police department. Don’t ask me how I can tell… 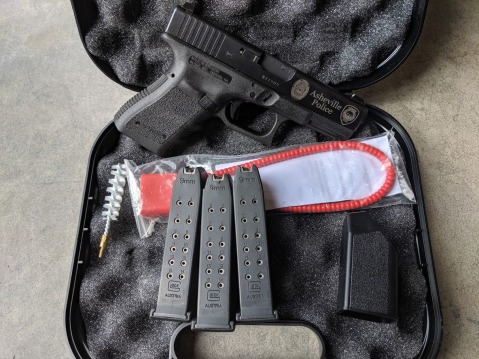 Anyway, just passing on the deal.