The USS Arizona Memorial has been closed since May 2018 for a $2.1 million stabilization and limited reconstruction, but it will be reopened on September 1, 2019 (Sunday). The National Park Service, in coordination with the Navy and contractors, completed the final phase of construction this month, with CPO selectees putting the finishing touches on the monument.

“The National Park Service is excited to welcome our visitors back to the USS Arizona Memorial very soon,” said Pearl Harbor National Memorial Acting Superintendent Steve Mietz in a statement. “It is a great honor to share the stories of the men of the USS Arizona, and all of those who served, suffered and sacrificed on Oahu on December 7, 1941. That is the cornerstone of our mission here, and restoration of public access to this iconic place is critical as we continue to tell their stories and honor their memory,” Mietz said.

The Tombstones of Battleship Row

In the 1930s, the Navy built 16 fixed concrete moorings to relieve congestion at Pearl and to provide additional berthing space for capital ships. Established in pairs designated F1 through F8, North and South, the eight along Ford Island’s southeast side became known as the famed “Battleship Row.”

Today, the quays remain as tombstones to the opening act of the Pacific War. However, they were important far past 7 December 1941. 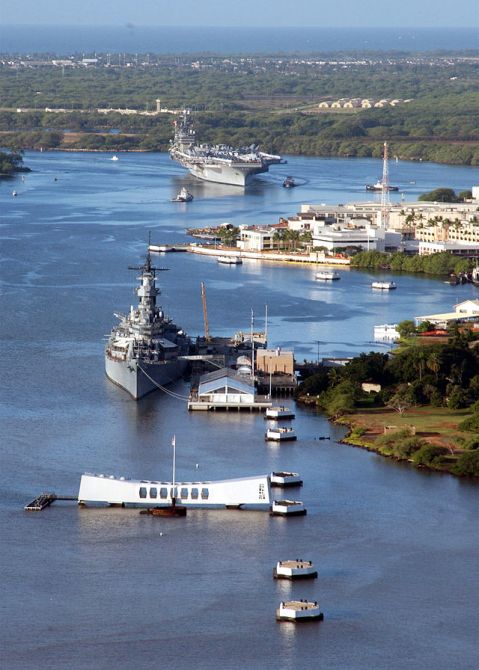 As noted by the NPS:

From the quays, American salvage workers accomplished unprecedented feats in the recovery of sunken battleships. Workers raised the USS California, USS West Virginia, and righted and refloated the USS Oklahoma. Extensive salvage work was performed on the USS Arizona. The quays were the foundations of the recovery, which lead ships like the West Virginia fighting throughout the remainder of World War II.

Now, as noted by the Park Service, “for the first time since 1941, the fleet moorings of Battleship Row are being examined, repaired, and architecturally reviewed in order to preserve these historic structures. It’s all part of a joint program with the Concrete Preservation Institute and the National Park Service to preserve and restore the moorings along Battleship Row.”

More on that, here

One response to “Battleship No. 39 Reopens”