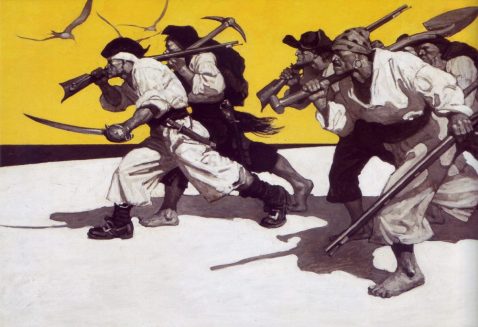 The 1911 Treasure Island pirates by Wyeth.

This month’s USNI’s Proceedings has an interesting piece by COL Mark Cancian, USMC, Ret, entitled, “Unleash the Privateers! The United States should issue letters of marque to fight Chinese aggression at sea.”

As the title would suggest, Cancian pitches the concept that modern-day LLCs could outfit ocean-going raiders, legalized by old-school letters of marque and reprisal to cover what would otherwise be acts of international piracy. The targets, in said scenario, would be the 6,000-strong Chinese/Hong Kong merchant/fishing fleet in the event of a hot war with Beijing.

Capitalizing on Chinese vulnerabilities requires large numbers of ships, and the private sector could provide them. The ocean is large, and there are thousands of ports to hide in or dash between. While the Navy could not afford to have a multibillion-dollar destroyer sitting outside Rio de Janeiro for weeks waiting for Chinese vessels to leave, a privateer could patiently wait nearby…

My thoughts on the good Colonel’s interesting concept is that it is one possibility, even if it is simply used as a threat. Project the prospect of the boogeyman and the boogeyman becomes very real, even if he isn’t under your bed.

What about the LCS?

Alternatively, I think we may have finally found a use for those first flight littoral combat ships (Freedom, Independence, Fort Worth, and Coronado) that have been deemed too beta to be upgraded enough for regular fleet use.

The LCS in its current form is fundamentally a “peace cruiser,” akin to the light cruisers built in the 1920s which were used primarily to show the flag in areas where it would be overkill to send a battleship– which probably wouldn’t fit inside the local harbor anyway.

You know what peace cruisers were also theoretically good for in the event of a war? Commerce raiders operating under Cruiser Rules away from the warzone.