Here we see the USS Des Moines (CA-134) and her sister ship USS Newport News (CA-148), laid up as part of the Bicentennial Exhibit at the Philadelphia Naval Shipyard, August 1976.

The two retired bruisers, the largest and most capable heavy heavy cruisers ever fielded by the U.S. Navy (with the exception of the Alaska-class “large cruisers”) Newport News had put in lots of heavy work on the gun line off Vietnam and was only decommissioned 27 June 1975, some 14 months prior to the above image. Des Moines, on the other hand, had been on red lead row since 6 July 1961.

The third, and unpictured, ship of the class, USS Salem (CA-139), had preceded her two sisters to early retirement and had been decommissioned on 30 January 1959 after less than a decade of service. Notably, she portrayed the German pocket battleship KMS Admiral Graf Spee (which she actually outweighed by 5,000 tons!) in the 1956 film The Battle of the River Plate. 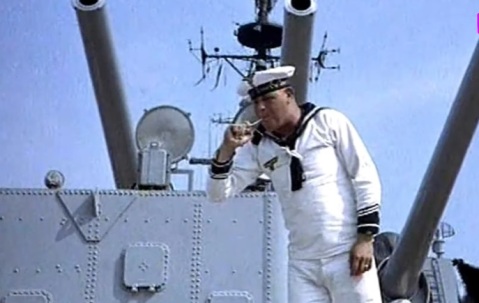 How about a chubby German BM on Salem’s quarter deck?

Ironically, the low-mileage Salem would go on to become a museum ship in Quincy, Massachusetts in 1994 while both Des Moines and Newport News were disposed of and slowly scrapped, with CA-159 only fully dismantled in 2007.