Here we see the unassuming yet near overloaded escort carrier, USS Long Island (CVE-1) underway off California on 10 June 1944, acting as an aircraft transport. Wearing Measure 32, Design 9a camo, she has 21 F6F Hellcats, 20 SBD scout bombers, and two J2F Duck utility planes on her flight deck. Commissioned 80 years ago this week, she was the prototype escort carrier in American service and made one hell of a beta test.

Laid down 7 July 1939, as the Type C3‑S‑A1 cargo freighter SS Mormacmail, under Maritime Commission contract for the Moore-McCormack Lines (Moore Mack), by the Sun Shipbuilding & Drydock Co., Chester, Pennsylvania, she launched 11 January 1940 and surely would have gone on to become any other merchantman had she not been acquired by the U.S. Navy on 6 March 1941 and entered service 2 June 1941 as Long Island (initially designated APV-1, but redesignated and commissioned as AVG-1, then later as Auxiliary Aircraft Carrier ACV-1 and CVE-1), with a lot of modifications from her original intended design.

Some 13,500 tons, she was 492 feet long and could accommodate 21 single-engine aircraft between her hangar deck and topside parking, or more than twice that many (as seen in the first image of this post) when being used as an aircraft transport.

USS Long Island (AVG-1) underway on 8 July 1941, with two F2A Brewster Buffalo fighters parked at the forward end of her flight deck. Note flight deck markings: LI. The ship is painted in Measure 1 camouflage, with heavy weathering of paint evident on the hull side. 80-G-26567

As noted by DANFs:

In the tense months before Pearl Harbor, the new escort aircraft carrier operated out of Norfolk, conducting experiments to prove the feasibility of aircraft operations from converted cargo ships. The data gathered by Long Island greatly improved the combat readiness of later “baby flattops.”

No matter if you call them “jeep carriers,” or “Combustible, Vulnerable, and Expendable,” the escort carrier concept is one we have covered a few times in the past several years on WW. Besides one-off training carriers and prototype ships, four large classes of U.S.-built CVEs (Bogue, Sangamon, Casablanca, Commencement Bay) were cranked out during WWII, approaching 150~ hulls planned or completed for Uncle Sam and his Allies. And Long Island was the inaugural model.

FDR himself had a keen interest in her development and went to sea to view her in operation firsthand. 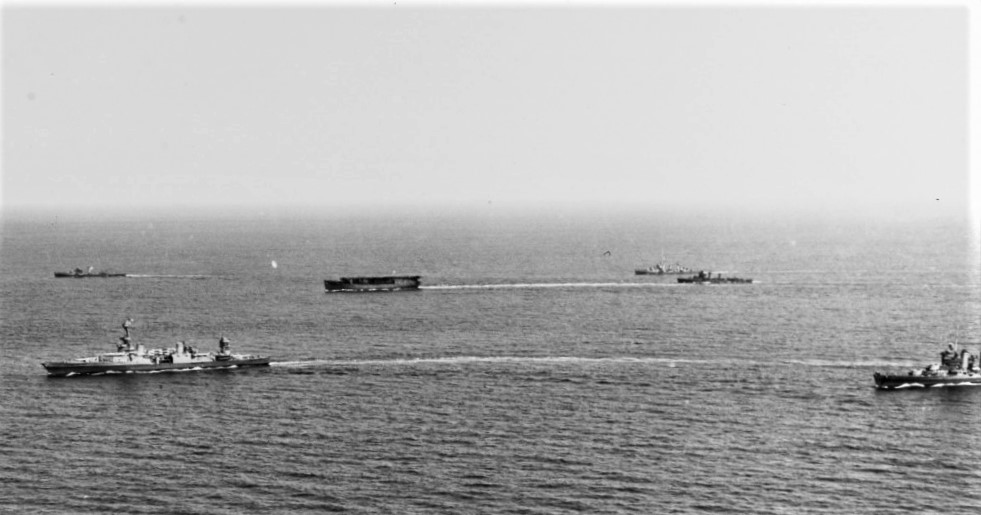 Following the official U.S. entry into WWII after Pearl Harbor, Long Island got operational, escorting a convoy to Argentia.

USS Long Island (AVG-1) View on the flight deck while operating in the vicinity of Argentia, Newfoundland, January 1942. This was the only time Long Island operated in such northern areas. Planes parked on the carrier’s snowy flight deck, behind the palisade, are Curtiss SOC-3A Seagull types, craft normally seen as floatplanes on cruisers and battleships of the day. 80-G-13129

Then, she qualified naval aviators on new types and made for the West Coast, because, while Hitler’s U-boats were beating a drum from Maine to Texas, things in the Pacific were even worse. 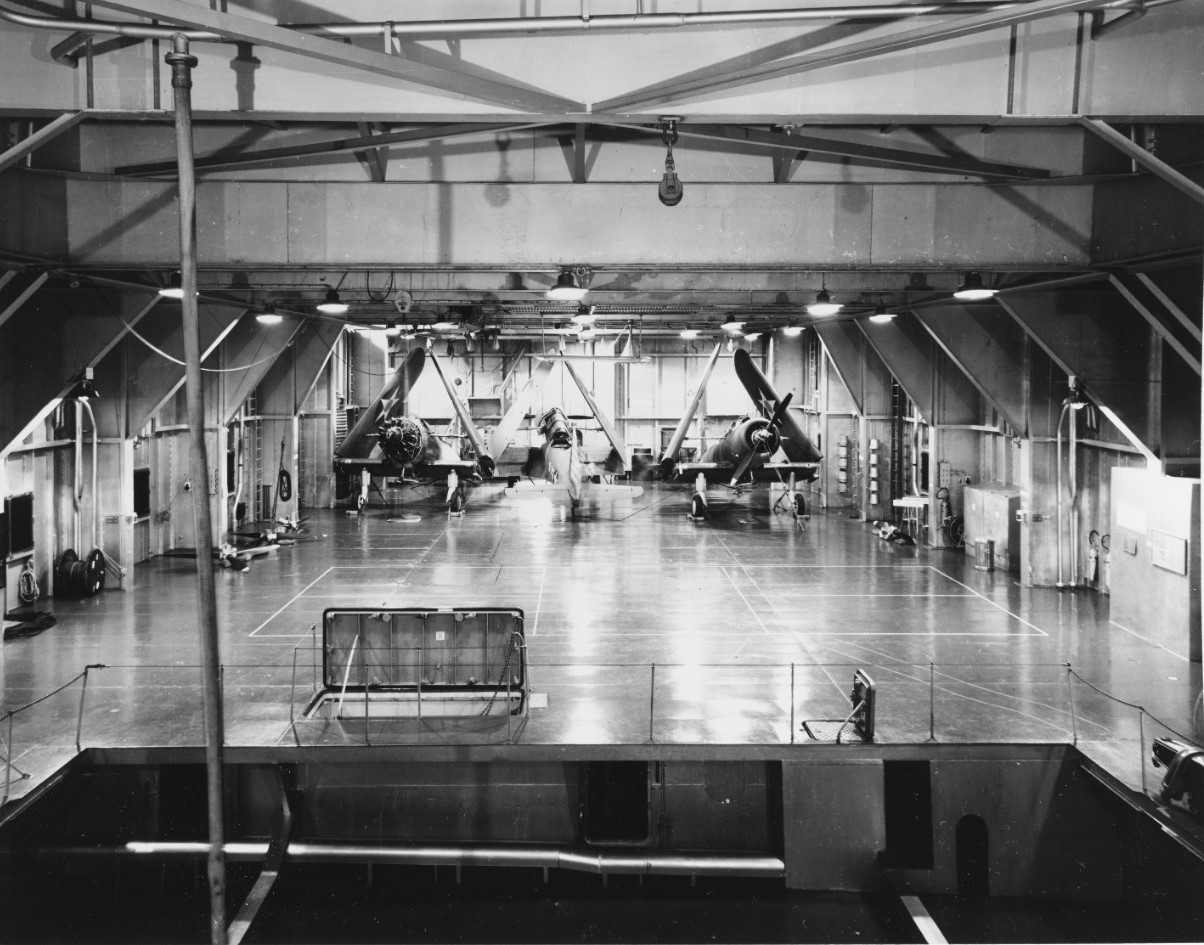 USS Long Island (AVG-1) View on the hangar deck, looking aft over the elevator pit, 28 March 1942. Three Vought SB2U scout bombers are present, embarked for carrier qualifications. Note propellers on deck, and cowling removed from the SB2U at left. The plane in the center is marked S-75. 80-G-16967

Reaching San Francisco on 5 June, Long Beach was attached to Task Force ONE under VADM William S. Pye to provide air cover for his four battleships headed to join Nimitz. 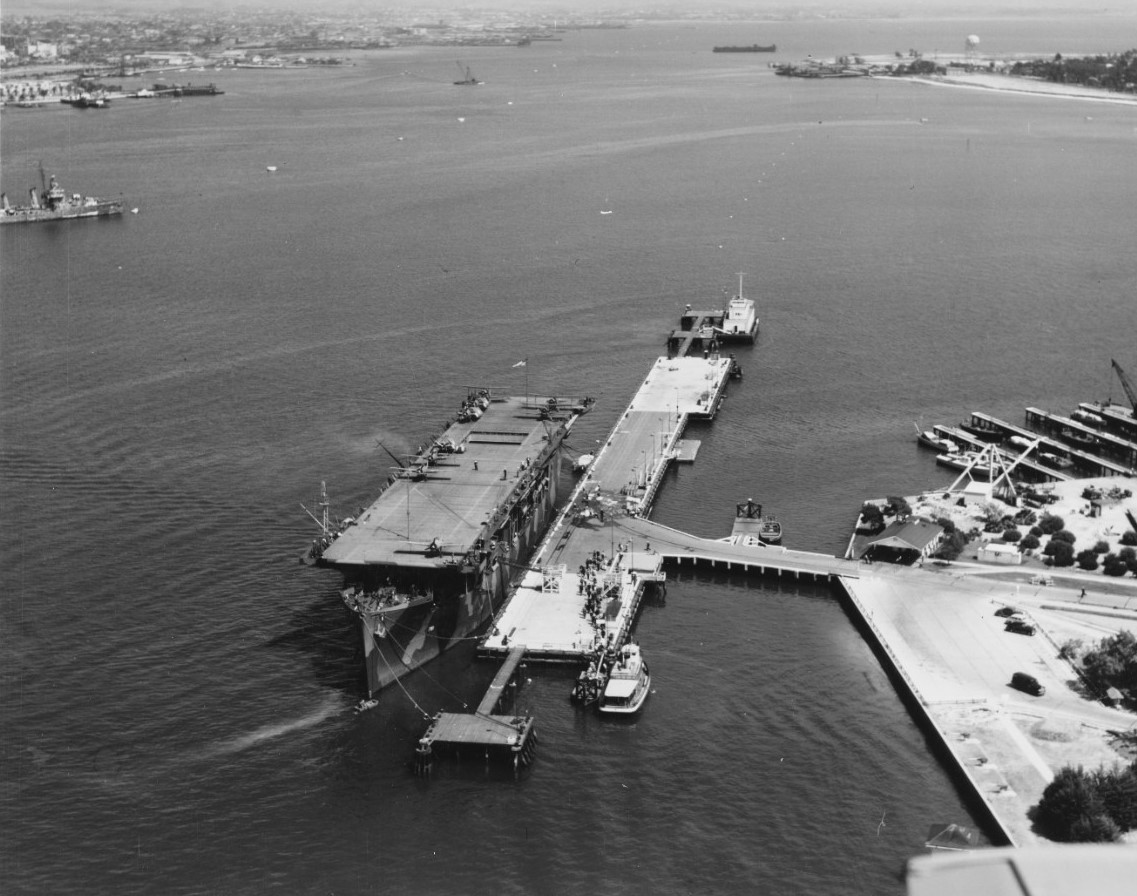 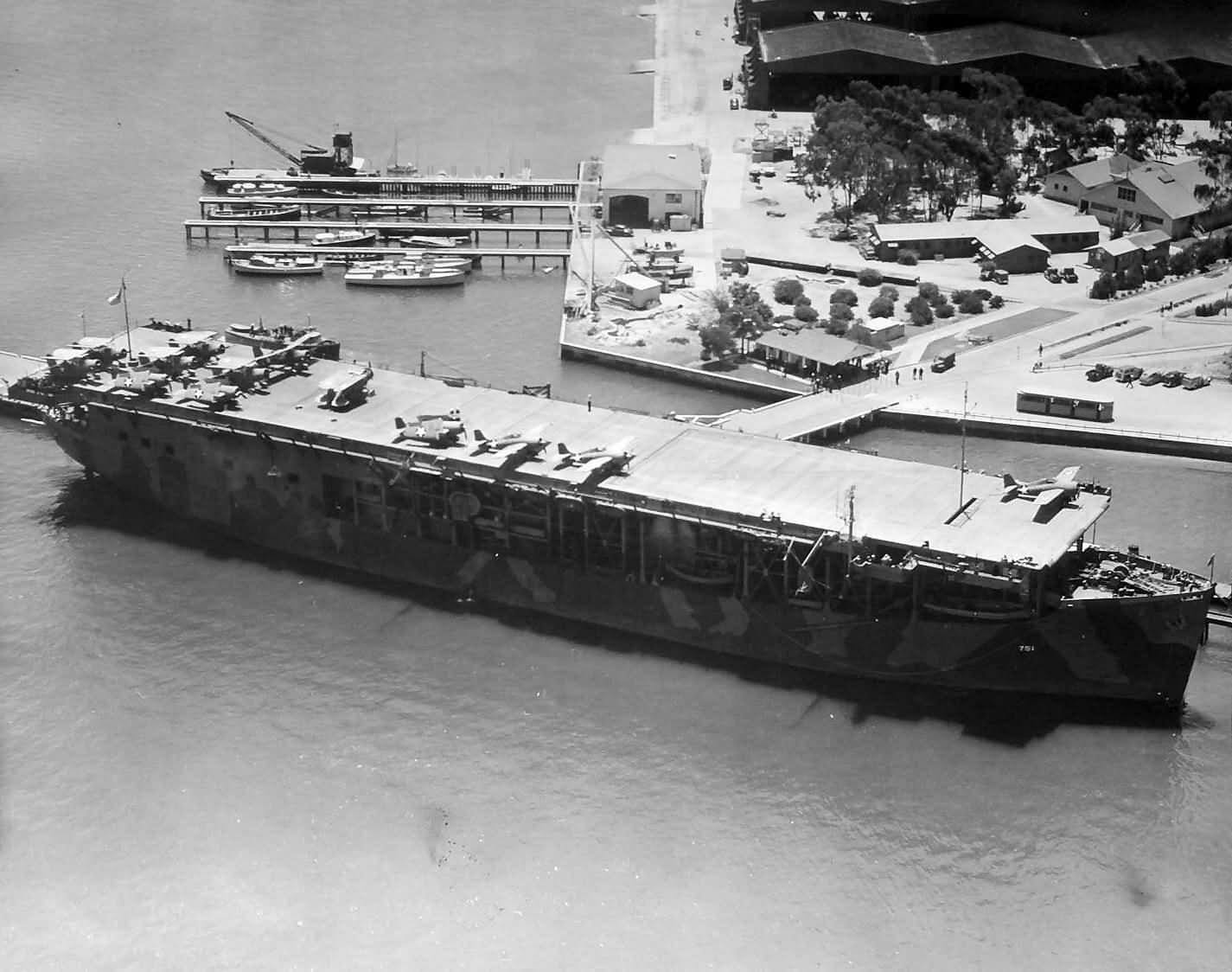 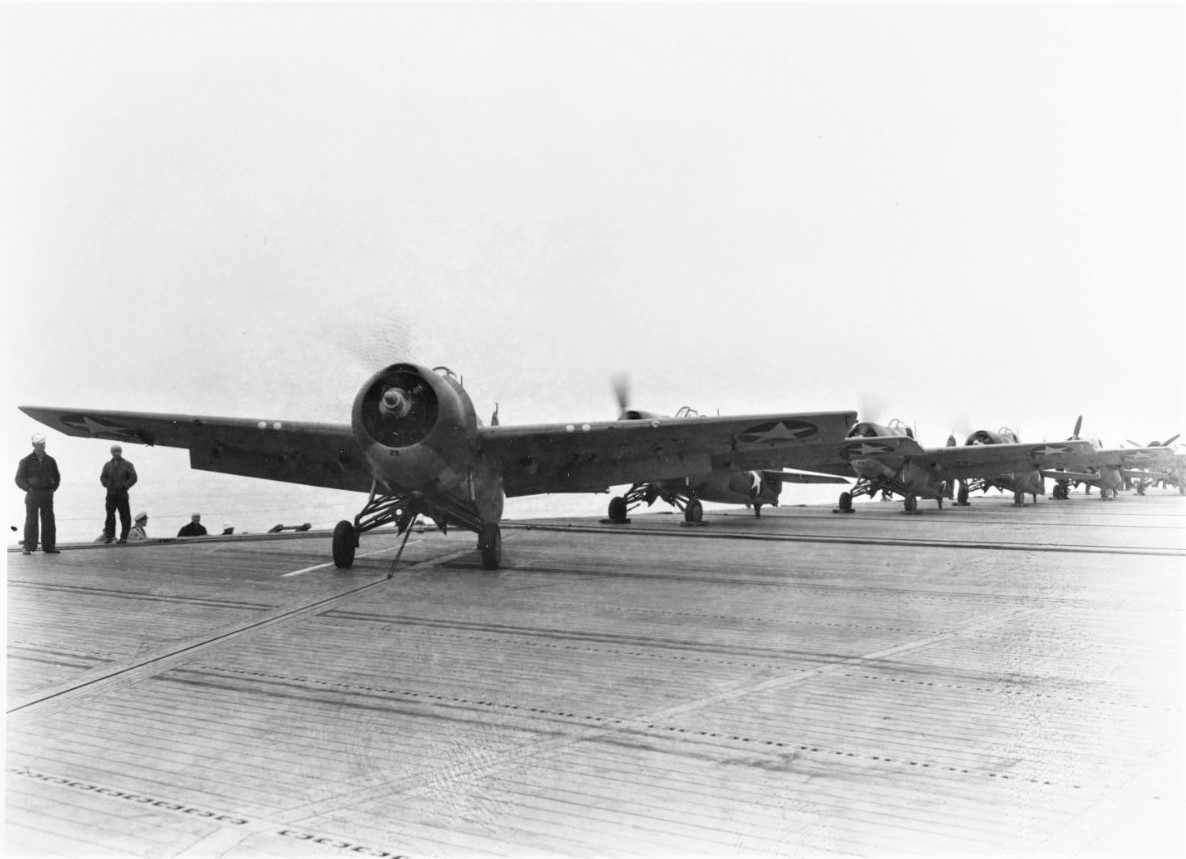 USS Long Island (AVG-1) Grumman F4F-4 Wildcat fighter on the catapult, ready for take-off, 17 June 1942. Several more F4F-4s are waiting their turn for launch. All planes are from squadron VGS-1. Note that Long Island’s catapult runs diagonally across the flight deck, from starboard toward the port bow. 80-G-14548 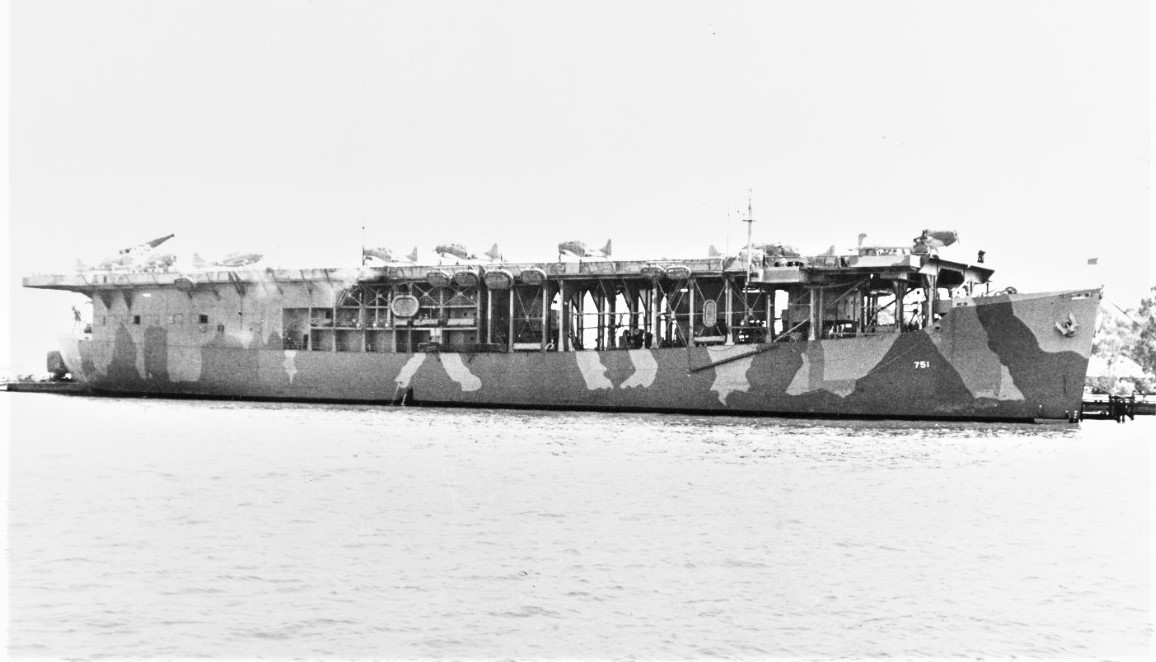 USS Long Island (AVG-1) at Pearl Harbor, Hawaii, on 17 July 1942, with at least eight SBD scout bombers and one TBF torpedo plane parked on her flight deck. This is only six weeks past the Battle of Midway. She is painted in camouflage Measure 12 (Modified) and wears an unusual number on her bow: 751. 80-G-73390

With things growing hairy at a place called Guadalcanal, Long Island picked up two squadrons of Marine tactical aircraft, part of Marine Aircraft Group 23, and headed down to Henderson Field accompanied by the cruiser USS Helena (CL 50) and destroyer USS Dale (DD 353) to supply the first planes to the budding “Cactus Air Force.”

Another view of the same. Note marking MF-5 on the plane’s fuselage and very weathered paint. The carrier’s SC radar antenna is visible atop her stub mast at the right. 80-G-12906

At 1700 on 20 August, the first Marines landed aircraft at Henderson Field– taking off from Long Island, some 200 miles to the southeast. They included 18 F4F Wildcats flown by the Bulldogs of VMF-223 (MAJ John L. Smith) and 12 SBD Dauntless dive bombers of the Red Devils of VMSB-232 (Lt. Col. Richard Mangrum). “A shout of relief and welcome went up from every Marine on the island,” reported LT. Herbert L. Merrill. 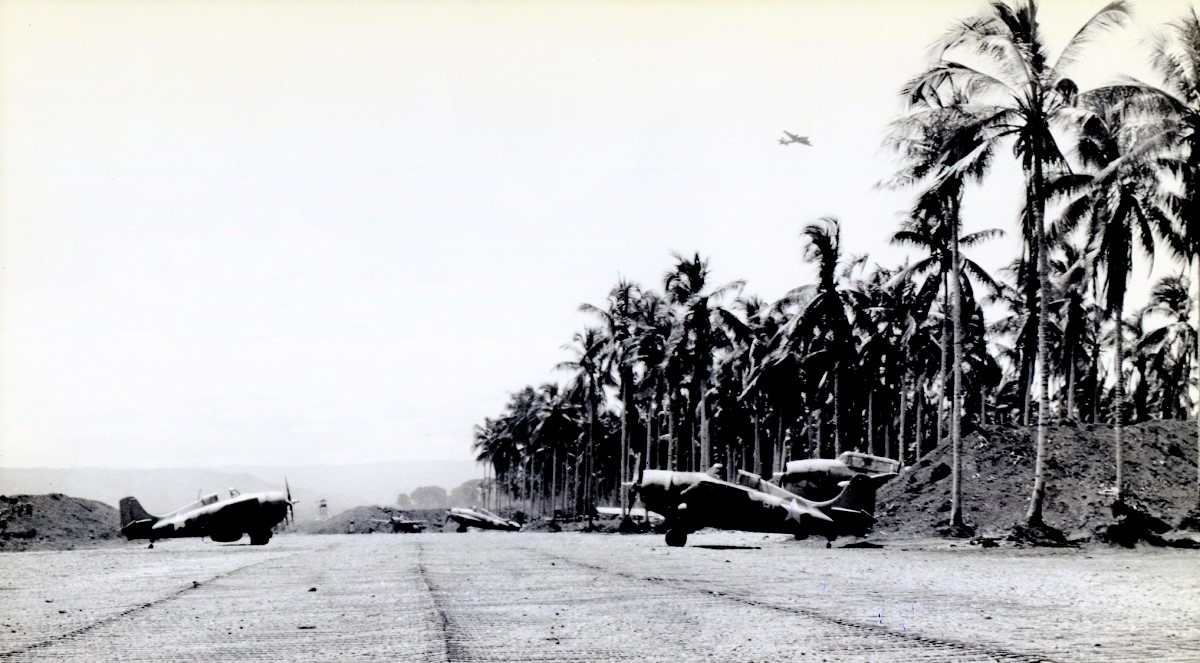 They flew their first combat missions from Guadalcanal the very next day and were in dogfights just 19 hours after landing.

Ordered back to the West Coast to serve as a training carrier– flattops in the Pacific of any type being exceedingly short at the time– Long Island avoided further brushes with combat but spent the better part of two years in this vital duty, alternating it with running aircraft to the forward areas as deck cargo. It was during this period that she was reclassified as an “Escort Carrier” and redesignated CVE-1.

Following VJ Day, she would continue serving as a Magic Carpet ride for returning GIs and bring back captured Japanese wonder weapons for technological analysis.

Japanese Army Type 4 Fighter, a Nakajima Ki-84 Hayate (U.S: “Frank”), painted in U.S. Navy colors onboard USS Long Island (CVE 1), 1945. Japan’s fastest fighter, Franks were the bane of B-29 squadrons over the Home Islands in the last years of the war. This example, serial number 1446, was captured at Clark Field during 1945 and shipped to the U.S. on Long Island late that year to be examined by the War Department. Sold off as surplus in 1952, it eventually made its way to the Tokko Heiwa Kinen-kan (Kamikaze) Museum in Japan, where it is the only surviving Ki-84 in the world.

A survivor, she was converted by Albina Engineering & Machine Works, Portland, to become an immigrant carrier under the name of Nelly, slowly shuttling war-shook Europeans eager to quit the old world for the new from ports in Western Europe to Australia, with accommodations for 1,300 steerage class passengers.

MS Nelly is seen at sea

By 1955, she had been purchased by the Europe-Canada Line to, as noted by SS Maritime.com, “provide inexpensive student/migrant travel to Canada” with 20 First Class and 970 Tourist Class accommodations. She would sail as MS Seven Seas.

A postcard of the Seven Seas issued by Europe-Canada Line via SS Maritime.com.

In 1963, she was again converted to a school ship for the University of the Seven Seas and World Campus Afloat (now Chapman University) then later become a floating dormitory in Rotterdam for Erasmus University, then for foreign workers in the 1970s.

Her usefulness long since passed, ex-SS Mormacmail/USS Long Island/SS Nelley/MS Seven Seas was towed to the breakers in Belgium in May 1977.

Seven Seas, ex-USS Long Island, in tow, on her last voyage from Rotterdam to Ghent, Belgium, 4 May 1977. She arrived there one day later and breaking up started immediately. Gerhard Mueller-Debus. Via Navsource

Little to nothing of Long Island remains today, and her name was never reused by the Navy, sadly. However, several of her squadrons, especially the 1942 Marine units, are still in existence.

Speaking of which, the image of the VMF-211 Buffalo crashed on her deck in July 1942 has gone on to have a life of its own, circulating far wider in its modified form than any other Long Island photo. It makes its rounds every May 4th.

The Long Island (CVE-1), the prototype escort carrier, as an aircraft transport, June 1944. Note that she still retained her arresting gear at this time. The original freighter superstructure is visible amidships, forward of her short hangar. Drawing and text from U.S. Aircraft Carriers: An Illustrated Design History, by Norman Friedman, via Navsource.