With this week closing out the year, we are taking a break from the normal WW coverage and, in a salute to the sleepy final days of 2021, are looking briefly at hammocks in naval use.

Apparently picked up by sailors after Columbus came to the New World and saw Awawak Indians lounging in the easy-going beds slung between trees, the Royal Navy began using hammocks as early as the 1590s, making them standard across the fleet by 1629, an upgrade from sleeping on a plank or sea chest.

Sailors stowed their hammocks when not needed in a way that they offered a modicum of protection from shrapnel in combat and would easily break free and serve as flotation devices should the ship be lost. 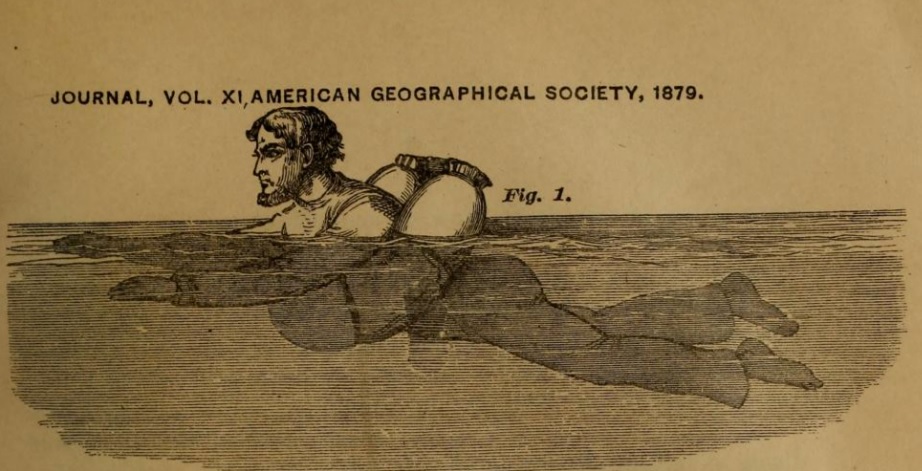 The disposition of the crew’s sleeping spaces aboard HMS Bedford, a 74 gun ship of the line, in 1775. Sailors’ hammocks are in blue, the Marines are in red– closer to the officer’s berthing and captain’s cabin. Via the Royal Museums Greenwich.

Enlisted personnel which included petty officers slept in canvas hammocks slung on the berth deck. When suspended, this canvas formed a receptacle for a mattress and blanket; when not in use, the canvas was wrapped tightly around the bedding and bound with a lashing and stowed in the nettings in clear weather and below when for any reason, such as rain, they could not be taken on deck. During his first year (Regs. of 1818) a man was allowed one mattress and two blankets.

From the 1800s through WWII, this meant the average Sailor learned the “Lash Up” that included carrying their hammock along with their seabag, taking the assigned netting with them when transferred ashore, or being sent to the infirmary or sickbay. Their issued hammock even remained their property in death as it served as a funeral shroud for their burial at sea, if required. 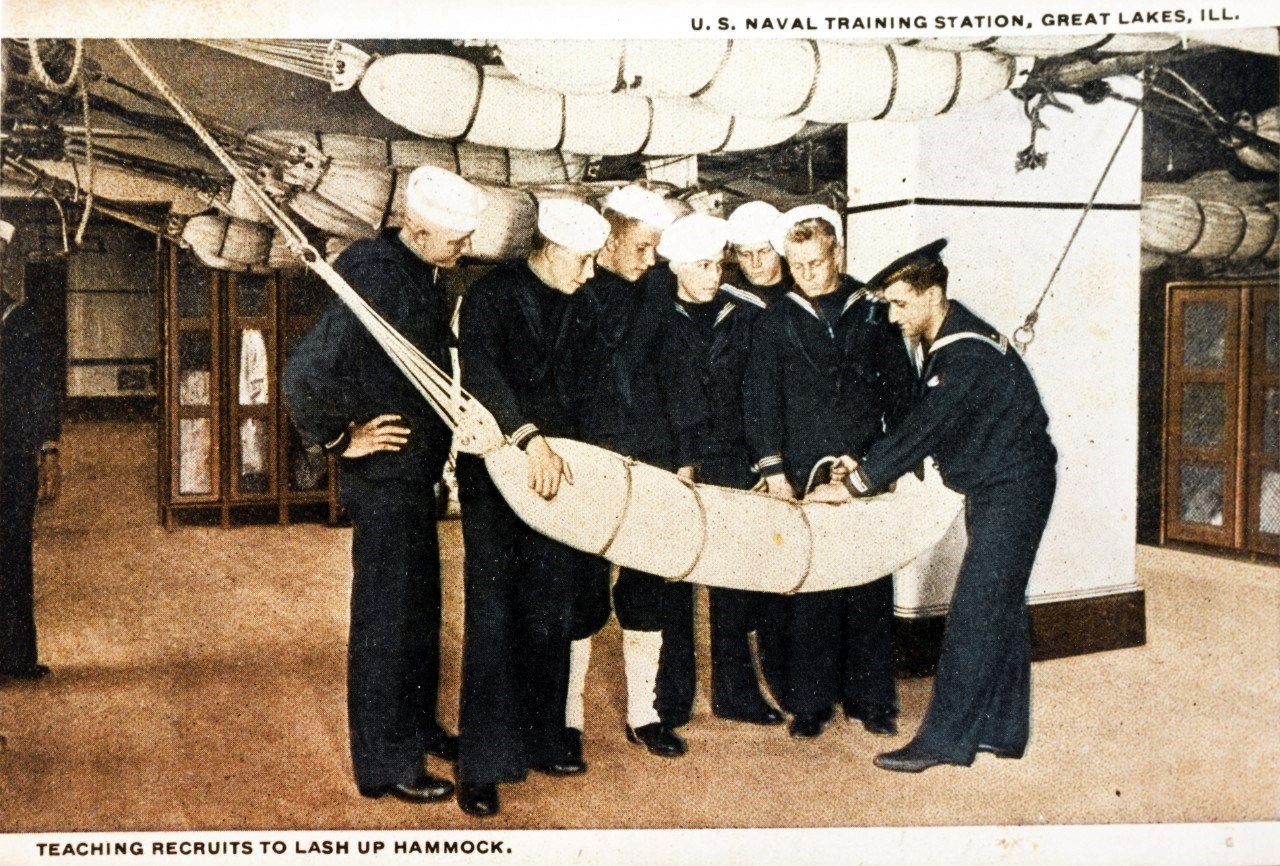 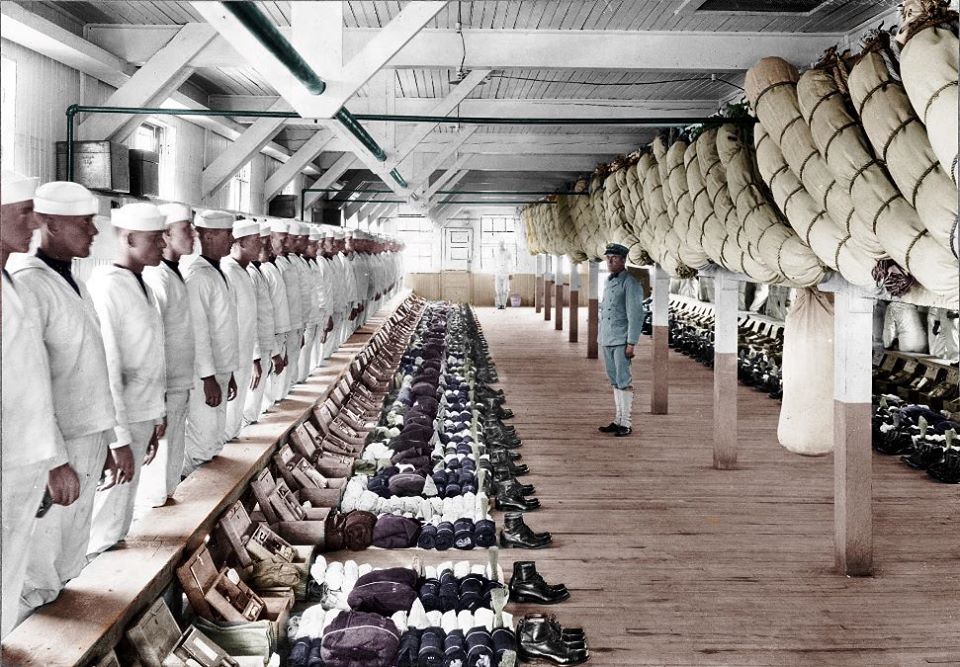 Sailors in barracks 1917. Note the lashed up hammocks to the right

The use of hammocks even gave rise to the term “Trice Up,” in nautical lore, meaning to make your rack as the hammocks had a trice or hook to secure it to the bulkhead or wall. Hence the term “All hands heave out and trice up.” Or jump out of your rack and make it, allowing compartment cleaners to sweep and swab. The term endured even after canvas racks replaced swinging hammocks.

1899 USS Olympia crew three sailors relaxing in their quarters, one man is in a hammock Frances Benjamin Johnson photo LOC 2015647057

Siesta on the Focsle 1909 snoozing sailors on the OLYMPIA’s focsle during the Naval Academy summer cruises. At right, Hammocks and blankets are being aired on the lifelines. 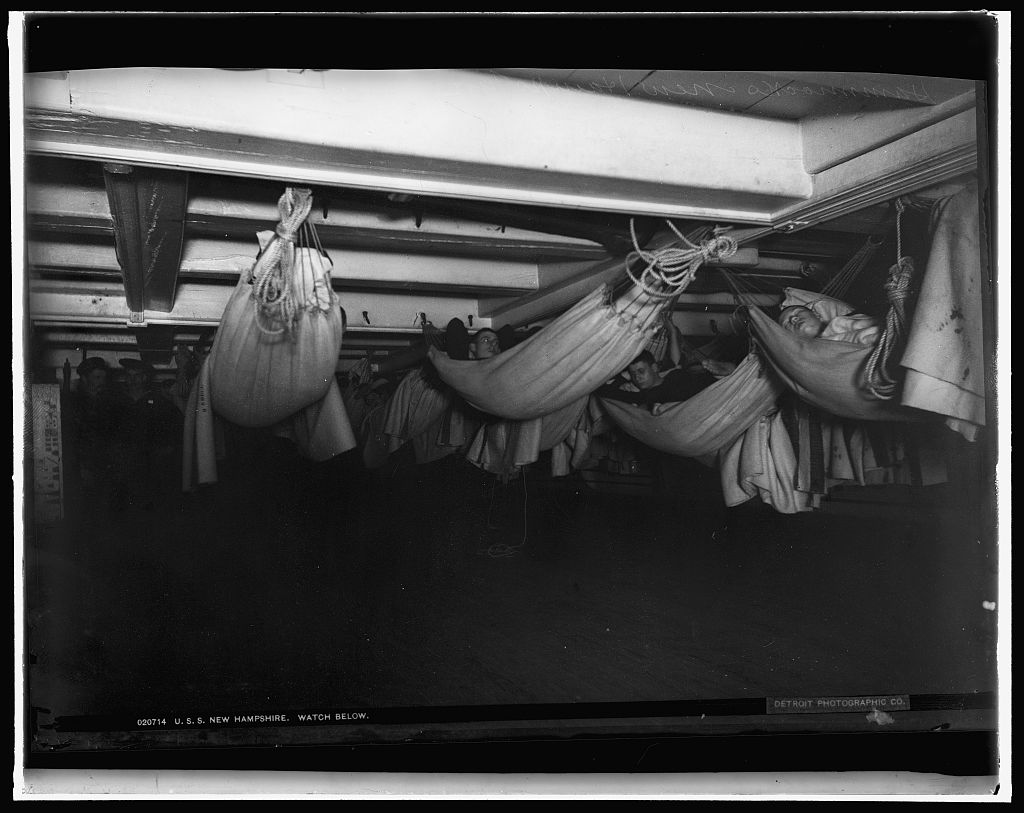 USS New Hampshire (built as a ship of the line, then became a storeship, later renamed Granite State in 1904 to free her name up for Battleship #25), sailors below deck in hammocks. Photographed by Detroit Publishing Company, probably 1904. LC-DIG-DET-4a30637 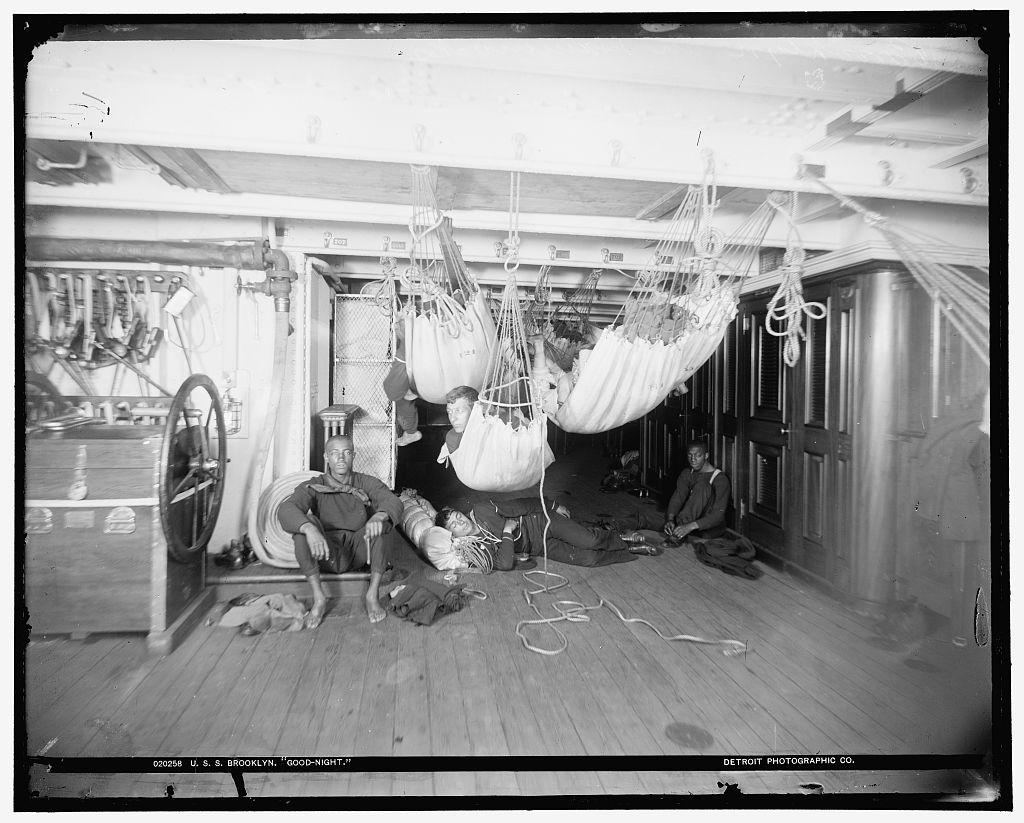 U.S.S. Brooklyn, good-night hammocks note there was little to no segregation below decks 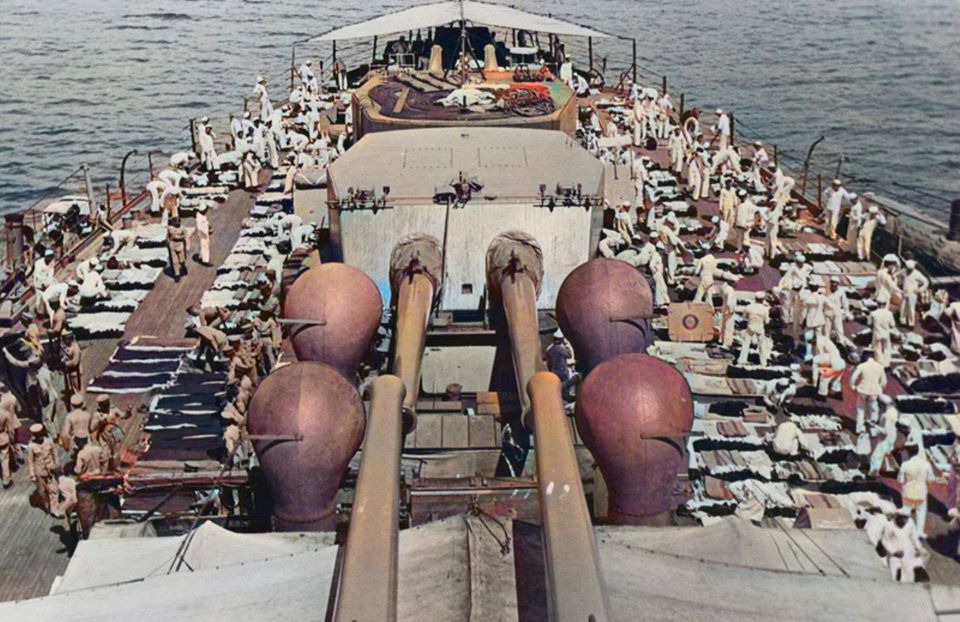 “Recruits looking over their new home.” These men are being transferred to a battleship of the Pennsylvania class (BB-38/39), having completed their preliminary training. The canvas bundles at their feet contain bedding, hammock, and clothes, 1 February 1918. Photographer: Underwood and Underwood. National Archives Identifier: 45512294. Local Identifier: 165-WW-333A-11.

Hammocks even came to the aid of a drifting submarine, with the early “pig boat” USS R-14 (SS-91) having to literally sail home in 1921 after the sub ran out of fuel during a SAR mission, leaving the salty crew to craft a sail out of canvas battery covers, hammocks, officer’s bed frames, and their radio mast to make it back to Hawaii. 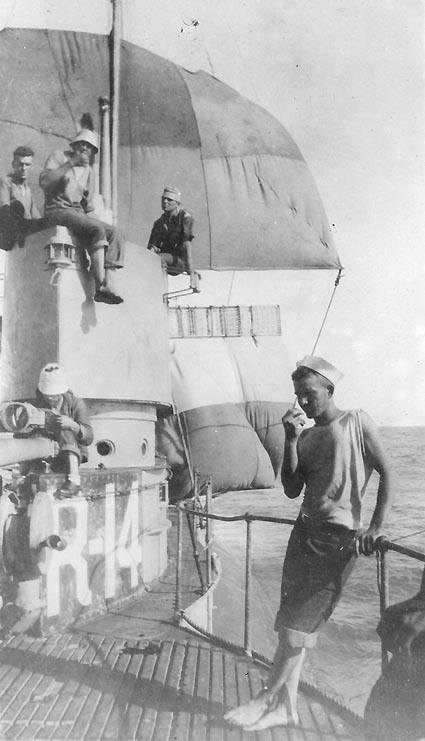 The use of hammocks was very much “old-school” Navy.

Starting in 1924 with the retrofitting of the crew’s berthing spaces on the recently-completed battleship USS California (BB-44), hammocks started phasing out in favor of triple-decker folding sleeping racks made from rope laced canvas on a pipe frame with each topped with a 3-inch mattress supported by chains attached to the bulkhead. Such bunks had been standard on several early submarine classes such as the K-class, which served in the Great War. 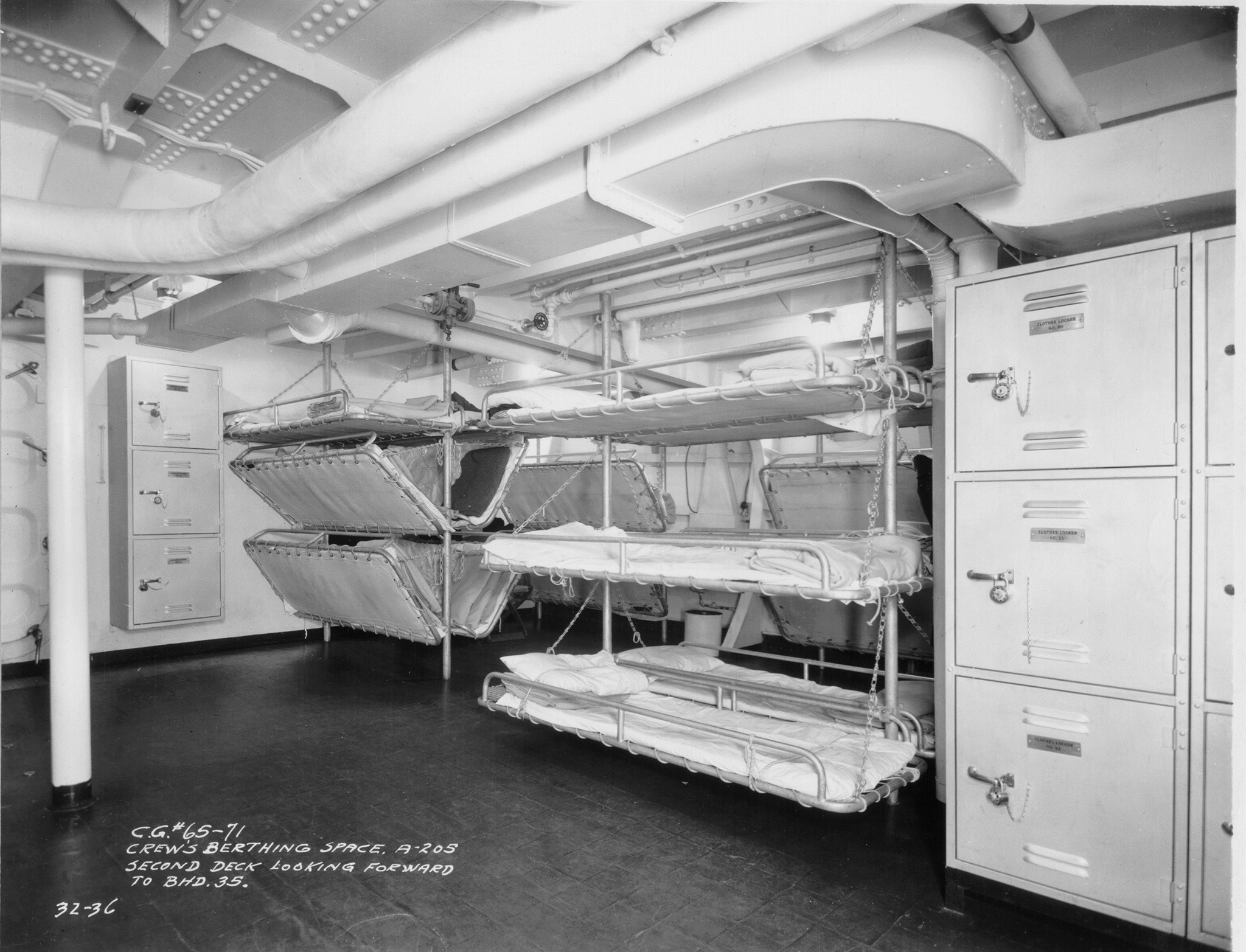 Triple decker folding racks that you could still “hot bunk” with after flipping the mattress and putting your sheet on the flipside. Seen on the 1930s-vintage USCGC Taney, a 327-foot gunboat built to the same rough design as the USS Erie (PG-50) class. Note the individual lockers.

This luxury was slow to expand to the rest of the fleet. For instance, it wasn’t until about 1940 that the Great War-era battleship USS Texas (BB-35) ditched hammocks for racks and reportedly the USS Tennessee (BB-43) never got the upgrade, still having hammocks at Pearl Harbor and continuing to use them through VJ Day despite the fact the old battlewagon received a nearly year-long modernization in 1942.

This meant that many Bluejackets went to WWII still swaying from hammocks at sea. The art of “clewing,” packing, and stowing a hammock was essential knowledge. 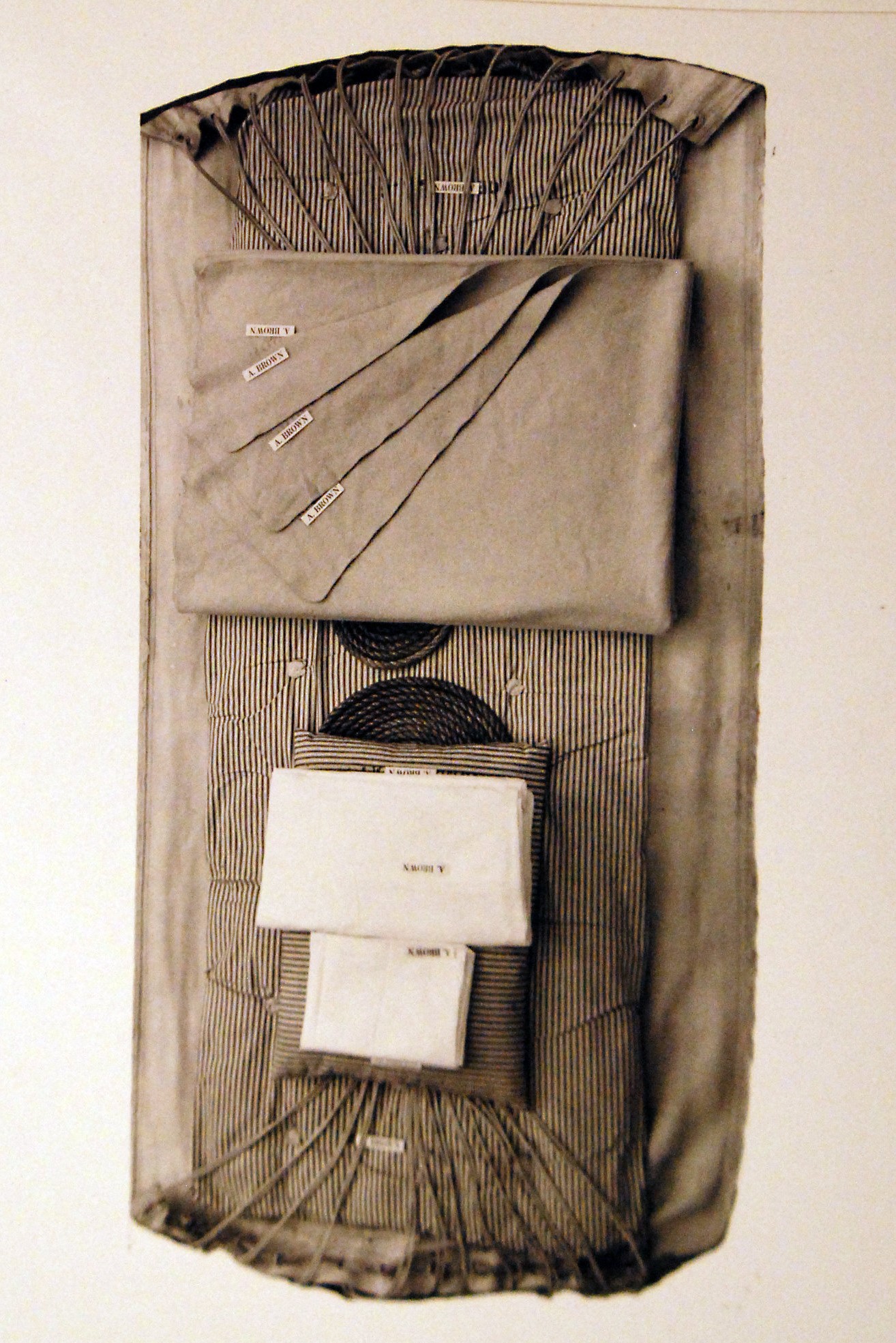 Hammock layout for inspection onboard USS Saratoga (CV 3), April 24, 1933. Note the name tapes on each item. Official U.S. Navy photograph, now in the collections of the National Archives. 80-G-221144

Even new construction continued the trend, with circa 1937-40 constructed Sims-class destroyers and 1936-39 Benham-class tin cans still including a few hammocks in their berthing although almost all enlisted had rack. The preceding  Bagley-class destroyers, completed in 1937, had 32 hammocks in mess spaces to augment 183 crew berths.

USS Rhind (DD-404), a Benham-class destroyer commissioned at the Philadelphia Naval Shipyard on 10 November 1939, still showing nine hammocks in her pre-war final book of plans before she would add 100 Sailors to her crew to man increased AAA and ASW suites for the upcoming conflict. The ship earned four battle stars during World War II and was scuttled off Kwajalein, 22 March 1948 following the Crossroads Atomic bomb tests. National Archives Identifier:167818528

It was only with ALNAV 278-45, (Navy Department Bulletin, 30 Sept. 45-1283), effective 15 October 1945, that mattresses and hammocks were decreed to be the property of the shore establishment or ship, rather than the Sailor issued them. Hammocks themselves had stopped being issued to new recruits the year before.

By the end of 1947, with ancient war wagons like Tennessee mothballed, hammocks were quietly removed from inventory. It should be noted, however, that the Coast Guard continued to use them well into the 1950s, with New London underclassmen sailing on the training ship USCGC Eagle, still swinging from hammocks while on their annual Mids summer cruise.

Meanwhile, the British continued to use the devices for a stretch longer, with the training ship HMS Fife (D20), a repurposed County-class destroyer, rigging hammocks for embarked cadets in one of the mess areas as late as a 1986 cruise and “may have been the last men of the Royal Navy to sleep in that fashion.” 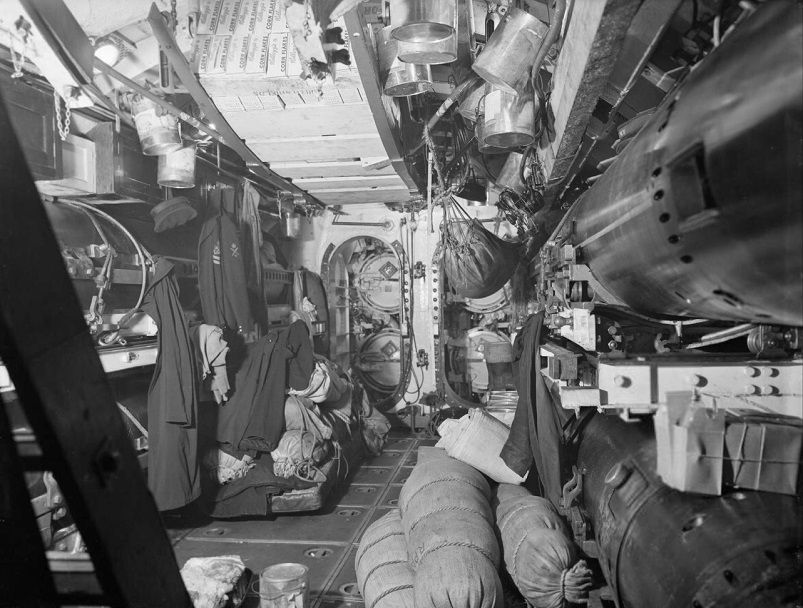 THE ROYAL NAVY DURING THE SECOND WORLD WAR. On board the submarine HMS TRIBUNE at Scapa Flow. The forward torpedo compartment. Around the stowed torpedoes some of the crew’s hammocks and kit bags can be seen. The men that work in this compartment also sleep here ready to respond to any emergency. Four of the eight forward tubes can be seen through the bulkhead. Creator: Priest, L C (Lt), Royal Navy official photographer Source: © IWM (A 10909)

Sailor at his hammock aboard HMS Rodney, 1940 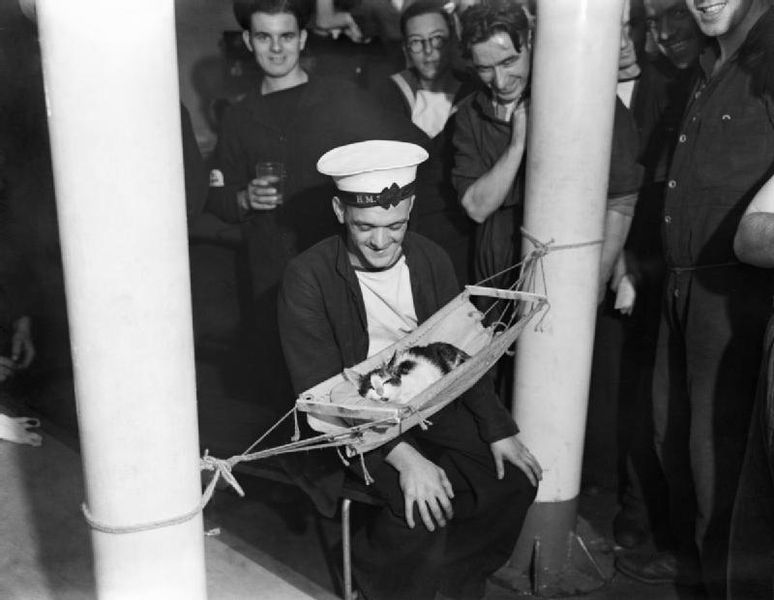 Convoy, cruiser HMS Hermione (74)’s ship’s cat, sleeps in a hammock whilst members of the crew look on

Still, that is not to say that the devices remained in limited use in the U.S. Navy for the past few generations since Truman dropped the A-bombs. The practice unofficially continued on submarines through the early 2000s on the old Sturgeon-class submarines, with some junior enlisted bubbleheads preferring to “rig nets” in out-of-the-way compartments rather than hot bunk in racks.

For more on the early life of sailors at sea and their personal gear, check out What’s in Your Seabag by James L. Leuci, MCPO, USN(Ret.)  as well as the 175-page thesis Hammocks: A Maritime Tool by Michele Panico. 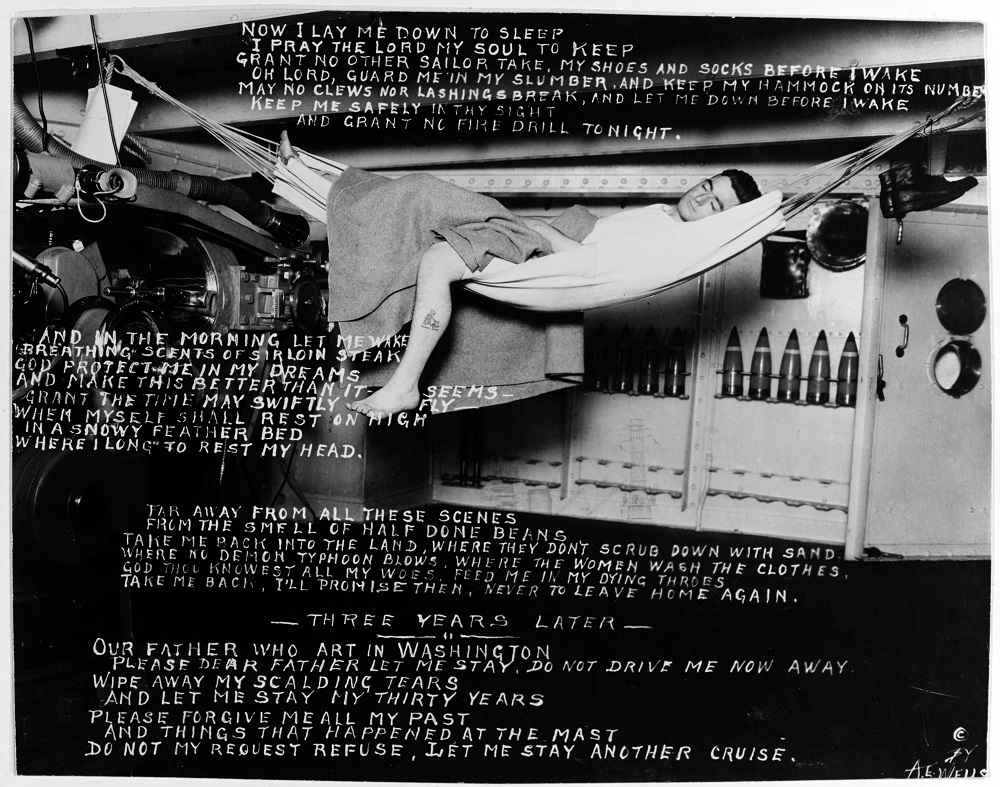 Back to our regular Warship Wednesday format next week.