The Japan Maritime Self-Defense Force a couple of weeks ago commissioned that country’s second new Mogami-class multi-mission stealth frigate, just four years after she was ordered. The JS Kumano (FFM-2) is modern and roughly the same size (5,500-tons, 426 ft oal) as the now-retired Oliver Hazard Perry (FFG-7) class frigates but better armed with a 5″/54, eight anti-ship missiles, a 16 cell VLS with the option for quad packed ESSMs– giving her 48 medium-range missiles in addition to her 10-cell SeaRAM system– as well as ASW and anti-small boat weapons.

She also has a hangar for a single MH-60 type and can launch UUV, USV, and sea mines from the rear ramp under her helideck. 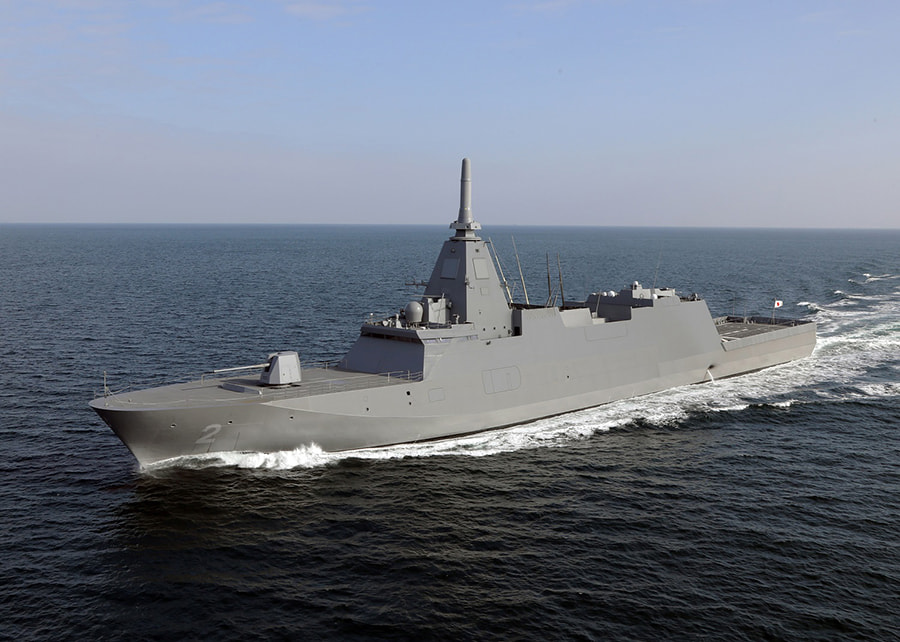 Interestingly, she quickly received a splinter camouflage scheme, something that is increasingly the rage in the West Pac.

All in all, the U.S. Navy would have been much better buying a couple dozen of these rather than the LCS debacle, but who wants to rub salt in that multi-billion dollar wound.

Of note to naval scholars, Kumano of course duplicates the name of the 13,000-ton Mogami-class converted heavy cruiser of WWII fame sunk by U.S. carrier aircraft from Task Force 38 while she was undergoing repairs at Santa Cruz, Zambales, Philippines, in November 1944 after taking a bruising at the Battle off Samar.

She had a reputation of being a vessel with nine lives.

She had participated in the invasion of Malaya and the Dutch East Indies, the bird-dogging of Royal Navy Task Force Z (HMS Prince of Wales and Repulse), Operation C in the Indian Ocean, Midway– where she caused the infamous collision between the cruisers Mikuma and Mogami– and the assorted battles for the Solomons.