Sweeping on the night shift

Posted on July 22, 2022 by laststandonzombieisland 3 comments

With each of the Sumners mounting six 5″/38s, they could get off a tremendous amount of fire when needed. 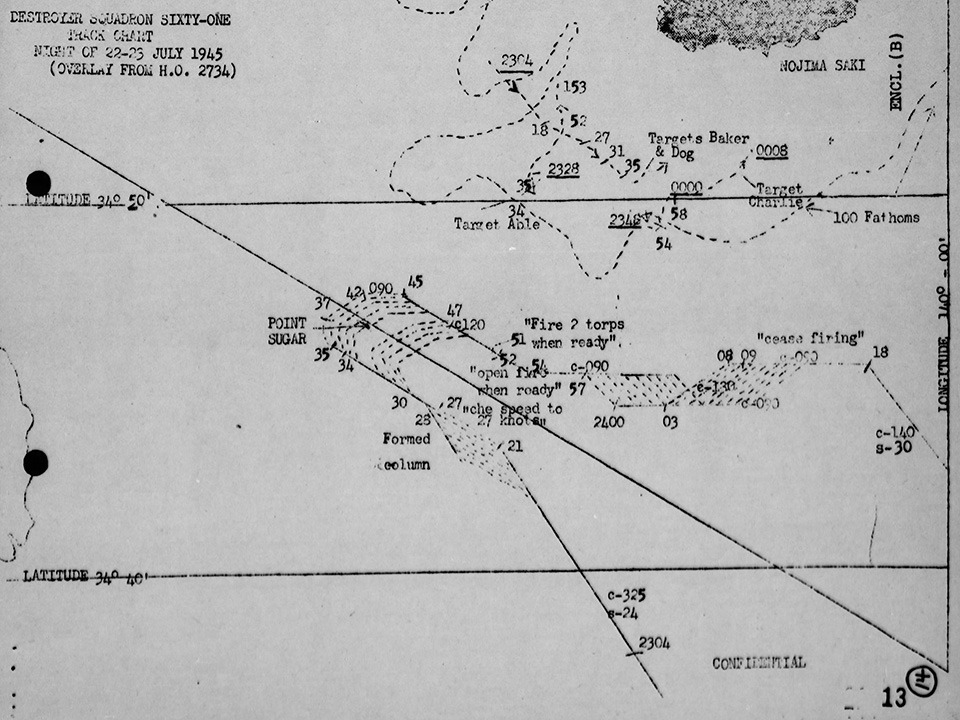 The score? One Japanese merchant ship was sunk– the freighter No.5 Hakutetsu Maru (810 t), and the other, Enbun Maru (7,030 t), damaged. The escorting IJN minesweeper (No. 1) and subchaser (No. 42) were unharmed. The little convoy was carrying a disassembled aircraft factory and was headed to Korea to set up shop, a trip that was aborted after the battle.

The American losses were zero.

As noted by the National WWII Museum, the engagement, termed today the Battle of Sagami Bay, was “the first time U.S. Navy ships entered the outer reaches of Tokyo Bay since April 1939.”

While DesRon 61 never received a commendation for the action, Halsey himself signaled afterward, pointing out that the force rode heavy post-typhoon seas into the Bay with great effect:

“Commander Third Fleet notes with great satisfaction the success of this well-planned and executed attack.

Commander Destroyer Squadron 61 is to be congratulated on the sound judgment, initiative and aggressive spirit displayed in ‘beating the weather’ to drive this attack home at the very door of the Empire.

You are unpopular with the Emperor. Well done”.

Allied ships entered Japanese waters 27 August 1945 on the eve of the surrender, and staged in Sagami Bay, where DesRon 61 had its shootout the month prior.

Hederman, an Annapolis grad (USNA ’23) had already earned a Navy Cross with DesRon61 off Okinawa and would retire in the 1950s as a rear admiral.

The nine tin cans would continue in U.S. service through Korea and Vietnam then were disposed of, with several going to overseas allies to live a second life. This included De Haven transferred to South Korea, Mansfield and Collett to Argentina— where they were assigned escort duty for the Argentine carrier Veinticinco de Mayo during the initial invasion of Port Stanley in the Falklands on 2 April 1982. Soon after, the two destroyers picked up the last screening duty for the pride of the fleet, the Brooklyn-class light cruiser ARA General Belgrano (ex-USS Phoenix). Meanwhile, Maddox (of later Tonkin Gulf fame), Moore, Taussig, Brush, and Swenson were sent to Taiwan where they survived for another three decades.