The ashes of Lauren Bruner, a survivor of the 7 December 1941, attack on Pearl Harbor and Oahu, be placed inside the wreckage of the USS Arizona (BB-39) in an interment ceremony at the USS Arizona Memorial on Oahu, Hawaii, Dec. 8. Bruner is the 44th and expected to be the last, crew member to be interred in accordance with this U.S. Navy ritual.

As noted by the AP,

“On Dec. 7, 1941, then-21-year-old Lauren Bruner was the second-to-last man to escape the burning wreckage of the USS Arizona after a Japanese plane dropped a bomb that ignited an enormous explosion in the battleship’s ammunition storage compartment.

He lived to be 98 years old, marrying twice and outliving both wives. He worked for a refrigeration company for nearly four decades.”

The last three living Arizona survivors plan to be laid to rest with their families, but Bruner decided to rejoin his old friends.

The dive was accomplished by U.S. Navy divers and Army personnel of the 84th Engineer Battalion’ s 7th Dive det– the latter of which have been training this last week to use two spun copper Mark V dive helmets and matching suits in the ceremony. 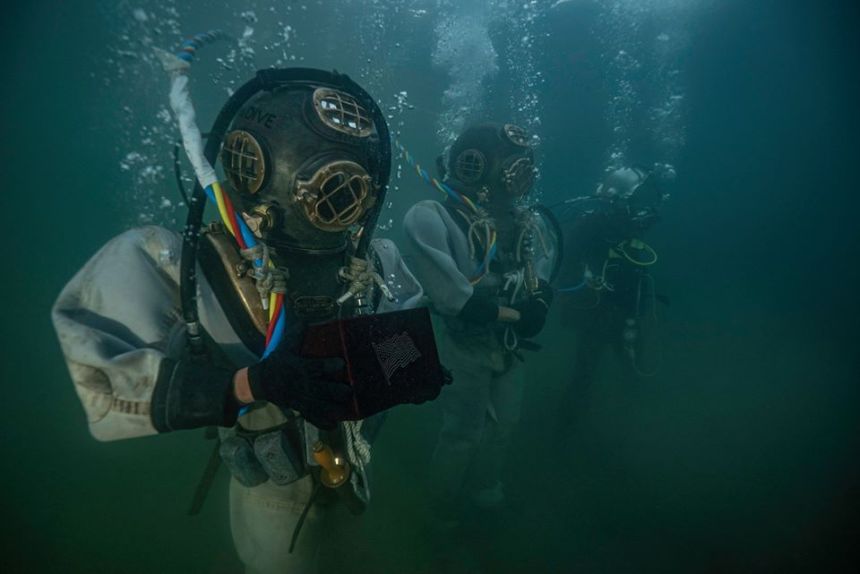