Buckeye in the Bay, 115 years ago today 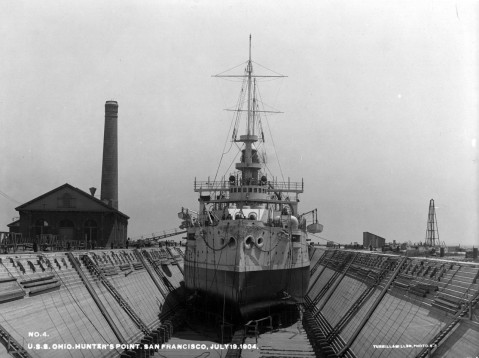 A Maine-class pre-dreadnought laid down at San Francisco’s Union Iron Works on 22 April 1899, the above picture was taken just 10 weeks before her official commissioning on 4 October 1904 and is likely a final hull inspection before she is accepted by the Navy.

The third U.S. warship to be named for the Buckeye State, she was preceded in service by a schooner on Lake Erie during the War of 1812 and an Eckford-designed 64-gun ship of the line that served under no less a naval hero as Commodore Isaac Hull.

BB-12, once she joined the fleet, served on the Asiatic Squadron during the tense period that was the Russo-Japanese War– which it should be pointed out was brokered to a peace treaty by President Theodore Roosevelt– before joining Teddy’s Great White Fleet to sail around the world. By the time the GWF made Hampton Roads in 1909, it and all the ships of the Squadron had been made obsolete by the introduction of HMS Dreadnought and the ensuing all-big-gun battleship rush that ended in the Great War.

USS Ohio (BB-12) (Battleship # 12) Passing the Cucaracha Slide, while transiting the Panama Canal on 16 July 1915, almost 11 years to the day after the above image. Note how much her scheme has changed since joining the fleet, with her haze grey scheme, and lattice masts. Gone is her beautiful white and buff scheme as well as her ornate bow scroll. Collection of Admiral Thomas C. Kinkaid, USN, 1973. U.S. Naval History and Heritage Command Photograph. Catalog #: NH 82269

With that being said, Ohio served stateside as a training vessel during World War I and, to comply with Washington Naval Treaty requirements, was sold for scrap in 1923, with but 19 years on her hull.

Her name was to have been carried by a Montana-class super battleship (BB-68) but was canceled before she was even laid down. Nonetheless, “Ohio” went on to grace the lead ship of the Navy’s current strategic ace in the hole boomers, SSBN-726, who has been in service since 1981 and is still going strong as a Tomahawk & SEAL van.