Happy Easter! Here’s a Tale for the whole family

I give you my favorite Bunny story: 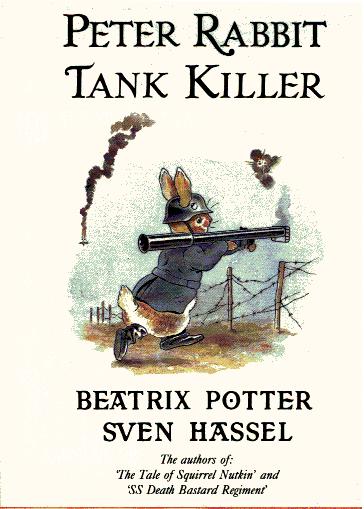 Once upon a time, there were four rabbits, Flopsy, Mopsy, Cottontail and Peter. They lived with their mother, Old Mrs. Rabbit, in a warren which looked -to the unaccustomed eye- rather like the lice infested trenches of World War I.

One day Peter’s mother said “I am going to market to sell my mittens. You may play in the woods if you wish but, Peter, you and your naughty cousin Benjamin Bunny are not to antagonize Mr. McGregor nor blow up any Panzer tanks today”, and with that, she left in a swish-swash-swish of rustling skirts.

But oh! That Peter was a naughty rabbit! No sooner had his mother left than he had dressed for combat and hopped down to the end of the lane to rendezvous with his cousin Benjamin. As the two young rabbits exchanged their fulsome greetings, they suddenly became aware of a mighty a-clinking and a-clanking coming up the road! Their little hearts a-flutter, they peered judiciously around the corner.

Why it was Mr. McGregor in a MkII Tiger tank with a transversable 88mm howitzer and two forward mounted 7.62mm machine guns! 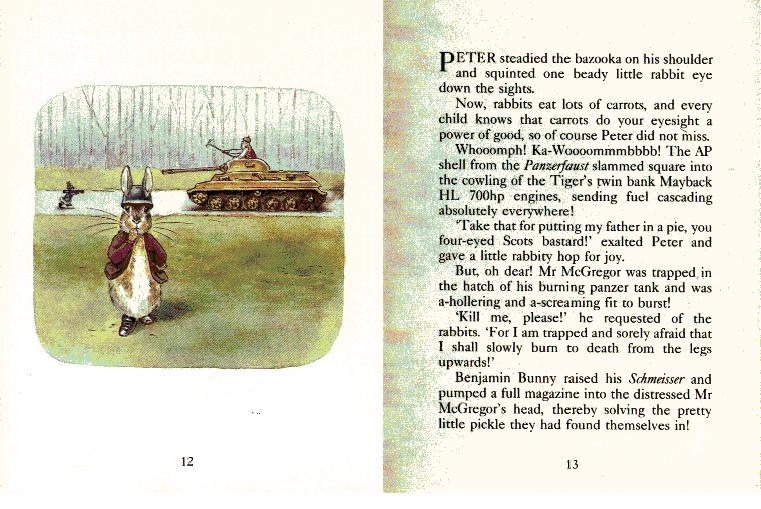 “Be quick and fetch the Panzerfaust anti-tank gun from Tom Kitten!” whispered Benjamin. So Peter went lipperty-lipperty all the way to Tom Kitten’s house.

“Quick!” Peter implored him. “Lend me your Panzerfaust, for Mr. McGregor has a Tiger tank and will surely blast us all into bloody shards of flesh, bone and sinewy pulp if we are not careful, if we are not most circumspect!”

Tom Kitten gave Peter his anti-tank gun willingly for Mr. McGregor had scolded him once. But by the time Peter had returned to his cousin, Mr. McGregor had driven up the road and opened fire on Jemima Puddleduck, killing her instantly.

“Thank goodness you were not the least tardy!” cried Benjamin, as the turret of Mr. McGregor’s tank slowly turned towards the humble abode of Mrs. Tiggy-Winkle.

Benjamin called out with the sensation of enjoyment. So Peter steadied the Bazooka on his shoulder and squinted one beady little rabbit eye down the sights.

Now, rabbits eat lots of carrots and every child knows that carrots do your eyesight a power of good, so of course Peter did not miss.

The AP shell from the Panzerfaust slammed square into the cowling of the Tiger’s twin back Maybach HL 700hp engines, sending fuel cascading everywhere!

“Take that for putting my father in a pie, you four-eyed Scottish bastard!” exalted Peter and gave a little rabbity hop for joy.

But oh dear! Mr. McGregor was trapped in the hatch of his burning Panzer tank and he was a-hollering and a-screaming fit to burst!

“Kill me, please!” he requested of the rabbits. “For I am trapped and sorely afraid that I shall slowly burn to death from the legs upwards!”

Benjamin Bunny raised his Scmeisser and pumped a full magazine into the distressed Mr. McGregor’s head, thereby solving the pretty little pickle they had found themselves in!

All of a sudden, another hatch opened who should fly out but Mr. McGregor’s cat! Now Benjamin’s father had no opinion whatsoever of cats, but Benjamin was shit-scared of them and would have most surely voided himself in his attire had not the cat been one huge ball of flame and surely demising.

When Mr. McGregor’s cat rattled and lay still, the two little rabbits exchanged salutes and promised to meet again next Thursday and then hurried back to their respective domiciles.

Oh dear! Old Mrs. Rabbit was distraught in the extreme when she learned what her naughty son had been about.

“How many times have I told you about blowing up tanks!” she chided. “You are a naughty, wicked rabbit!”

Flopsy, Mopsy and Cottontail who had not assaulted any armored vehicles were rewarded with fresh lettuce and carrots and radishes, but Peter was sent to bed without any supper.

But then, who wants to eat that rabbit food shit anyway?