Warship Wednesday June 18, The Opening shot of the old subkiller

Posted on June 18, 2014 by laststandonzombieisland 10 comments

Here at LSOZI, we are going to take off every Wednesday for a look at the old steam/diesel navies of the 1859-1946 time period and will profile a different ship each week. These ships have a life, a tale all of their own, which sometimes takes them to the strangest places.- Christopher Eger

Warship Wednesday June 18, The Opening shot of the old subkiller 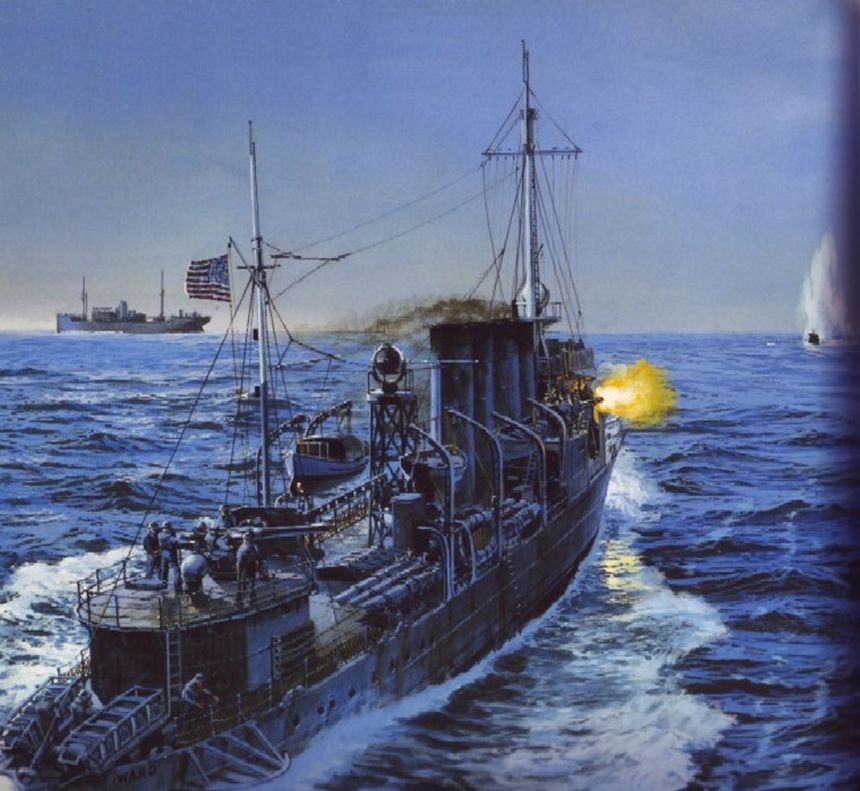 Here we see the old Wickes-class destroyer, USS Ward (DD-139/APD-16), with her No.3 4-inch MK9 gun dropping it like its hot on an unidentified submarine contact trailing the 11450-ton auxiliary USS Antares (AG-10/AKS-3) into Pearl Harbor on the early morning of December 7, 1941.

Ward had an eventful life to say the least.

Built as one of the 111-ship Wickes-class, she was one of the iconic ‘Four Piper” destroyers that were designed in 1915-16 with input from no less an authority as Captain (later Admiral) WS Sims. Beamy ships with a flush-deck, a quartet of boilers (with a smokestack for each) were coupled to a pair of Parsons geared turbines to provide a blistering 35.3-knots designed speed, which is still considered fast today, nearly 100 years later. The teeth of these 314-foot, 1250-ton greyhounds were four 4-inch/50 cal MK9 naval rifles and a full dozen 21-inch torpedo tubes.

They had short legs and were very wet, which made long-range operations a problem, but they gave a good account of themselves. Originally a class of 50 was authorized in 1916, but once the U.S entered WWI in April 1917, this was soon increased and increased again to some 111 ships built by 1920. 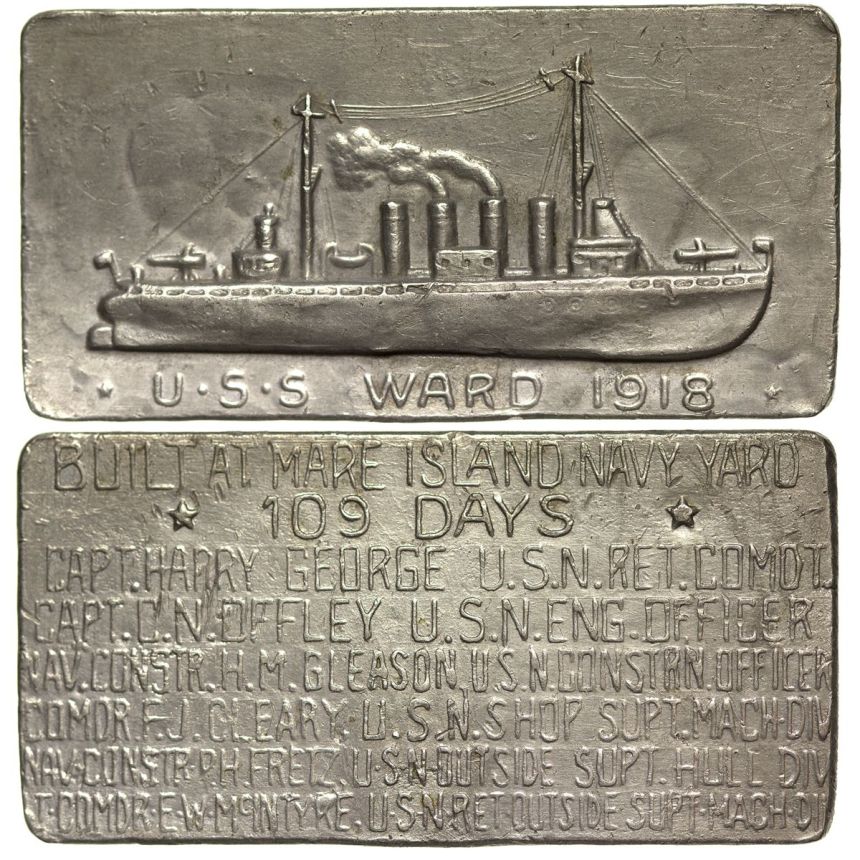 Ward was a warbaby. Laid down at Mare Island Navy Yard in San Fransisco on 15 May 1918, she was commissioned just 109 days later on 24 July. 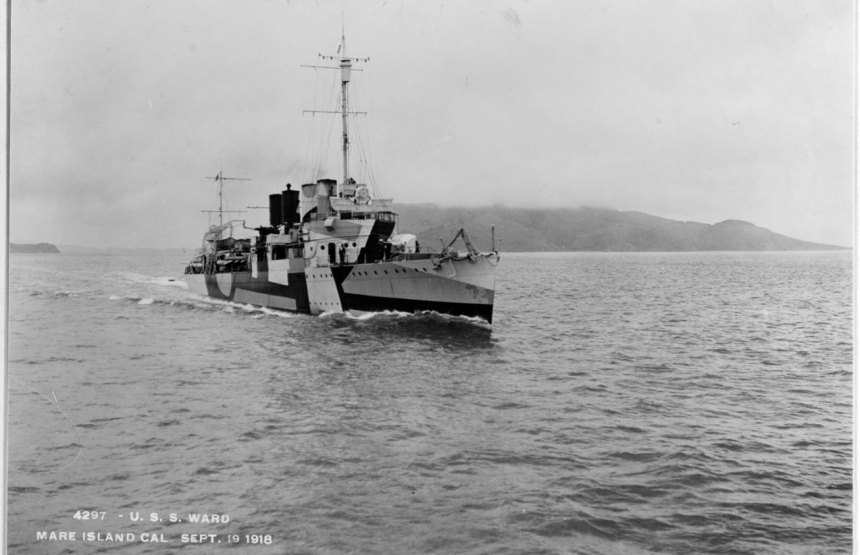 Her service in World War One was brief, the war basically ending just weeks after she was transferred to the Atlantic. She did, however, help escort the four NC flying boats that crossed the Atlantic the following year.

Like most of the Wickes-class boats, she was soon laid up due to the shortage of real live shooting wars in the 1920s. By July 1921 Ward was on read-lead row.

During this time, the 111-ship class was reduced with several ships being lost in accidents, scrapped, or sunk as targets. In 1940, 27 of the class were transferred to Britain and Canada as part of the famous “Bases for Destroyers” deal. Then in 1941, with the new war coming, Uncle Sam started knocking the rust off his old four-pipers and bringing them back into service.

With that, Ward was recommissioned 15 January 1941. Since the Navy was short on man-power, the ship was crewed in large part by citizen sailors of the St Paul Division of the Minnesota Naval Militia.

As part of the increasing naval presence in Hawaii, the 23-year old, low mileage destroyer with her now active-reserve crew was sent to Pearl Harbor to patrol the coastline for unauthorized intruders. Her skipper was Lt.Cmdr. William Woodward Outerbridge (USNA 1927), on his first command.

It was then at 03:57 on Sunday Morning, 7 December 1941, that the Ward, on patrol outside of the peaceful harbor at Pearl, was alerted to a periscope sighting from the 85-foot long Coast Guard manned converted wooden-hulled purse seiner USS Condor. After going to battle stations and alerting Pearl, Ward spotted a periscope of unknown origin trying to sneak in past the harbor nets at about 0630. Her No.3 gun crew opened fire on the intruder, which later turned out to be Type A Ko-hyoteki-class submarine No.20 of the Imperial Japanese Navy.

Several of the 4-inch shells from the gun penetrated the conning tower of the midget sub, while depth charges lifted the tiny craft out of the water before she plummeted to a depth of 1200-feet where she lay on the seafloor and was found 3-miles from Pearl Harbor by a University of Hawaii research submersible on 28 August 2002. 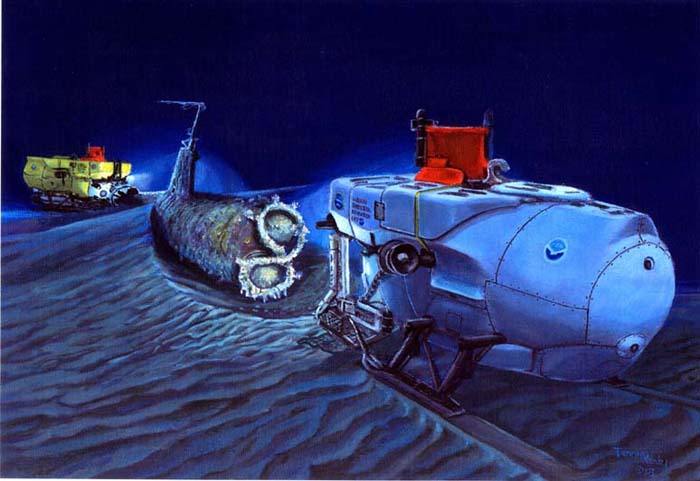 For more than 50-years, it was claimed by many naysayers that Ward sank nothing on Dec 7th, then when the University of Hawaii found Midget Submarine No.20 with Ward‘s shell holes through her in 2002, they could naysay-nolonger.

The Ward had fired the first U.S. shots of World War Two and tragically, although they were an hour and a half before waves of Japanese carrier planes came in low over Battleship Row, the fleet was not properly alerted. 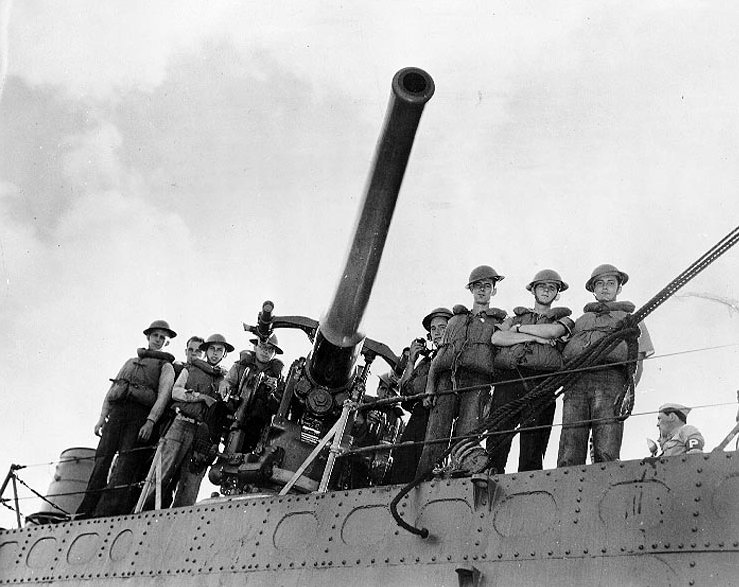 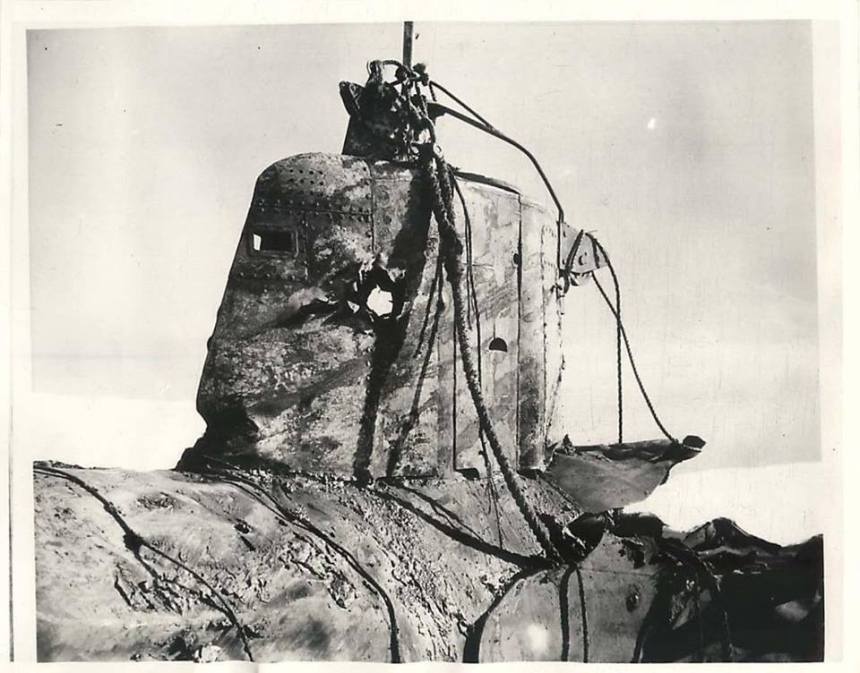 Shell hole in conning tower of Japanese Type A Ko-Hyoteki two-man submarine, raised after the sub had been shelled and sunk during the Japanese raid on Pearl Harbor.

With the changing pace of the new naval war, the Ward, as was most of her class, was converted to other uses, being too small for fleet work. She lost her 4-inch guns, which went on to equip armed merchant ships, as well as her torpedo tubes. Also leaving were half of her boilers, which dropped her speed down to 25-knots. She was given a trio of newer high-angle 3-inch/50 guns, one 40 mm AA gun, and five 20 mm AA guns, and the capability to carry up to 300 marines or soldiers for a brief period of time. In this new role, she was re-designated as a high-speed amphibious transport (APD-16). Where her torpedo tubes once were, she now carried four 36foot LCP landing craft on davits. 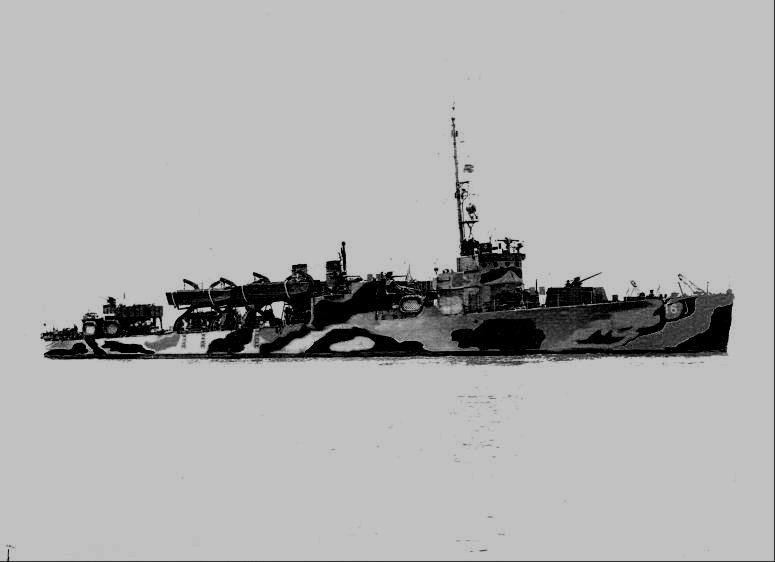 These conversions had a hard war. They transported troops to beachheads, served as escorts for transports and supply vessels, conducted anti-submarine patrols and survey duties, operated with Underwater Demolition Teams and commando units, performed messenger and transport duties, conveyed passengers and mail to and from forward units, and were involved in mine sweeping operations. Ward landed troops at Saidor, Nissan Island, Emirau, Aitape, Biak, Cape Sansapor, Morotai,  Dinagat Island, Ormac Bay, and others. 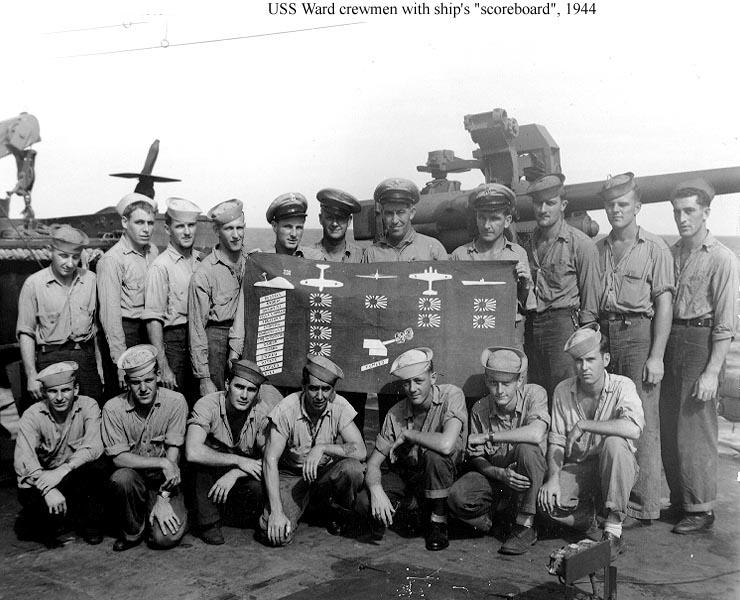 It was off of Ormac in the Philippines that the Ward, with only her naval crew aboard, was attacked by a kamikaze. 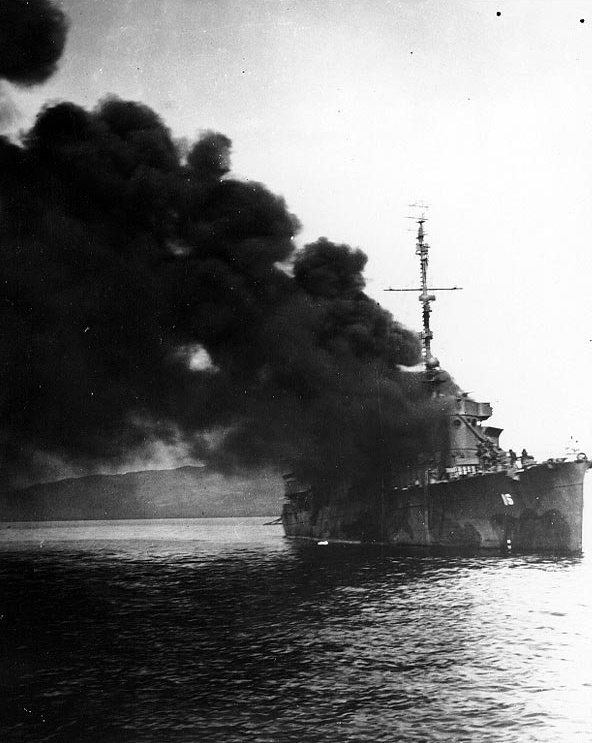 A 314-foot ship is not designed to withstand a direct impact from a loaded fighter-bomber, and soon she was fully involved. Her crew abandoned ship and the newly built Allen Sumner-class destroyer USS O’Brien (DD-725), recently transferred to the Pacific after dropping it while it was hot on the Germans on Normandy on D-Day, administered the coup de grace. 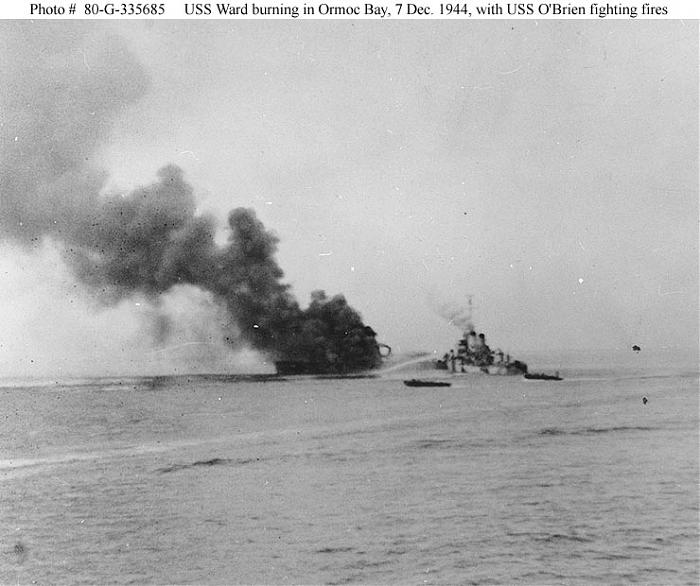 Another amazing coincidence, O’Brien‘s skipper on that day was now-Commander William Woodward Outerbridge, who helmed Ward three years before.

In another turn, O’Brien herself would later be sunk as a target by U.S ships off California on 13 July 1972 at the end of her service life. Outerbrigde retired from the Navy in 1957 as a Rear Admiral after thirty years of service, taking his last breath on September 20, 1986.

Today no Wickes-class tin can survives. The last one afloat, USS Maddox (DD–168), was scrapped in 1952 after serving in the US, then RN, then Canadian, then Soviet navies.

One of the class, the USS Walker (DD-163), has been given new life in the excellent alternate history series Destroyermen written by Taylor Anderson.

However, it should be noted that Ward‘s famous gun No.3 still exists, saved from going down with the ship by virtue of it being replaced during the war with more modern ordnance. 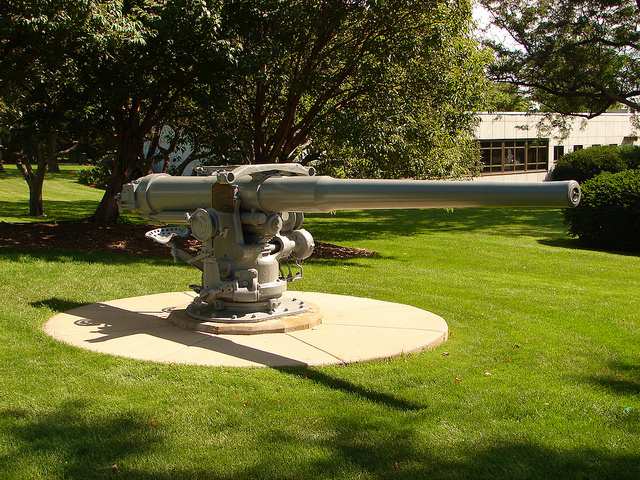 Preserved in the Twin Cities area, it was presented to the state in 1958 by the Navy in honor of her Minnesota reservist guncrew on Dec.7, 1941.  It is located on the grounds of the Veterans Service Building in St. Paul. 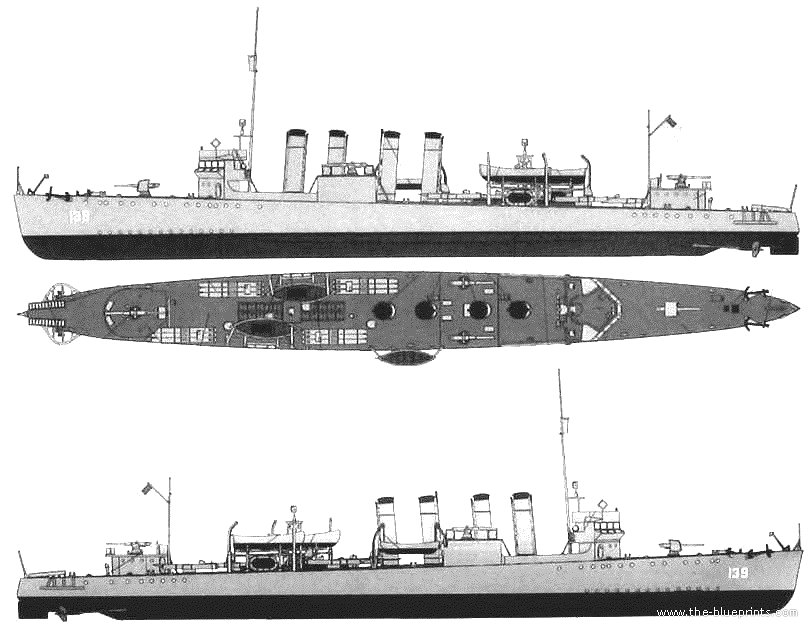 The International Naval Research Organization is a non-profit corporation dedicated to the encouragement of the study of naval vessels
and their histories, principally in the era of iron and steel warships (about 1860 to date). Its purpose is to provide information and a means
of contact for those interested in warships.

Nearing their 50th Anniversary, Warship International, the written tome of the INRO has published hundreds of articles, most of which are
unique in their sweep and subject.