Posted on September 2, 2015 by laststandonzombieisland 2 comments

Here we see the 257.8-foot steel-hulled steam yacht, SS Delphine, poking along the Riviera. Almost a century old, the Delphine has a rich history and played a key role in WWII.

She was the second of two yachts owned by Horace E. Dodge, who along with his brother John Dodge, were the owners of Dodge Brother Automobiles in Detroit. The car dynasty these two brothers created remains as part of Chrysler today. 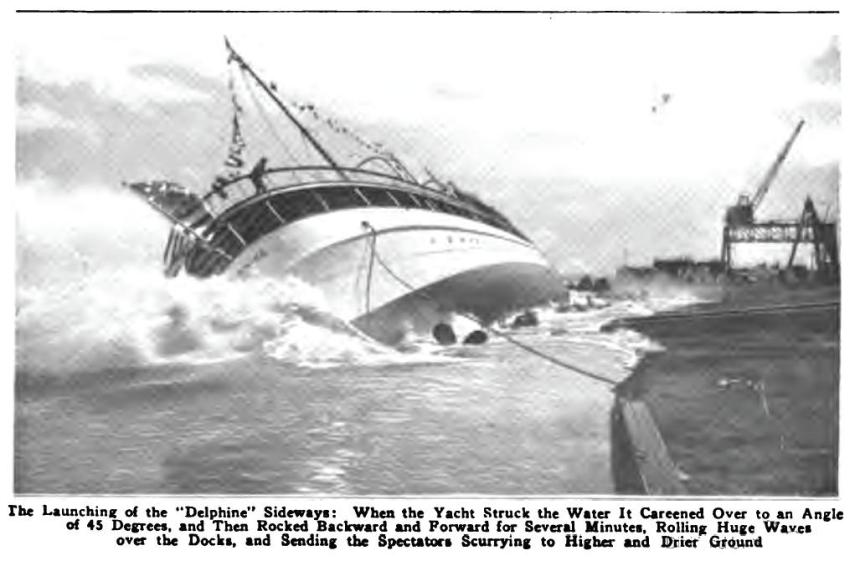 Her interior was done by Tiffany’s of New York and, when launched on April 2, 1921, was the largest yacht built to date in the U.S. and cost $2 million, which in today’s cash is about $25 million, which is still a bargain.

Ironically, Horace never saw her complete, having died from the Spanish flu in 1920.

The toast of the Great Lakes, she also made it out to the East Coast to visit Martha’s Vineyard and Manhattan for “the season,” where her guests, which enjoyed a 2:1 crew-to-guest ratio in style, attended regattas and speedboat races.

Sunk in an accident in 1926, Delphine was raised after four months on the bottom of the Hudson, once refitted, and remodeled for $750,000, put back into regular service.

By 1935, the luxurious yacht, with the Dodge family out of the car business and the Great Depression on, was docked for an extended period and owned by Anna Dodge Dillman of Grosse Pointe, Michigan, where she was a popular site for years docked at her private pier on Lake St. Clair.

With war on the horizon, the U.S. Navy came looking for gently-used but still usable hulls, Delphine was acquired by Uncle on 21 January 1942 and commissioned five months later after refit at Great Lakes Engineering’s River Rouge, Michigan yard as a gunboat with a wartime paint scheme, a pair of 3-inch guns and some .50 cals, a Marine detachment, and a new name: USS Dauntless (PG-61).

With her warpaint on

Why the Marine detachment on a slow gunboat? Well, she was tasked as the flagship for Admiral Ernest King, Commander in Chief of the U.S. Fleet and Chief of Naval Operations, that’s why.

She was gutted after the Navy acquired her in January 1942. Large, panoramic windows in her hull were replaced with portholes. Much of the boat deck was ripped out to accommodate six self-launching life rafts, and the aft promenade deck was cut away for an anti-aircraft gun. The superstructure was extended forward some 10 feet to accommodate more crew bunks, and .50-caliber machine guns were added, six in total. New masts were installed, one with new radar. A larger searchlight was placed on top of the pilothouse.

Inside the hull, the dining room became a radio room, pantry and officers’ wardroom. The guest staterooms on the lower deck were subdivided into 10 smaller officers’ staterooms. The ship was wired for electricity, and air conditioning was installed.

To complete the conversion, Delphine was dipped in the colors of war—gray/green/blue camouflage paint—and designated Naval Gunboat PG 61 (patrol gunboat), the USS Dauntless. Dauntless arrived at the [Washington] Navy Yard on June 16, 1942, and was moored to Pier 1. On June 17, King’s flag was broken and he moved aboard.

The ship saw the epic course of the naval war planned and coordinated from her secure and spy-proof wardroom and, in November 1943, secretly shuttled 19 members of FDR’s War Department down the Potomac to the USS Iowa in the Chesapeake Bay, which then crossed the Atlantic to the Tehran Conference war talks.

A different kind of beautiful

The Navy liked her so much they kept the old girl around for a year after the war ended, and finally struck her on 5 June 1946, returning her to Ms. Dodge’s custody who quickly sent her to a refit at Great Lakes Engineering (one of the last jobs performed by the yard before it was shut down) to restore Delphine to her pre-war condition, keeping only the navy siren and 9 hash marks on her stack from her wartime service.

Note the hash marks on her funnel

In 1968, she was donated by the Dodge family to the Seafarers Harry Lundeberg School of Seamanship (SHLSS) in Piney Point, Maryland where she served as a training ship for merchant seamen under her WWII-era Dauntless name until 1986.

Then over a ten-year period, she changed hands a few times and, aging and in poor condition, was towed to Bruges, Belgium for a six-year restoration in 1998.

Since 2003, after being rechristened to her original name by no less a personality than Princess Stephanie of Monaco, she has been in regular service along the Riviera as a yacht for charter under Portuguese flag– while being up for persistent sale. 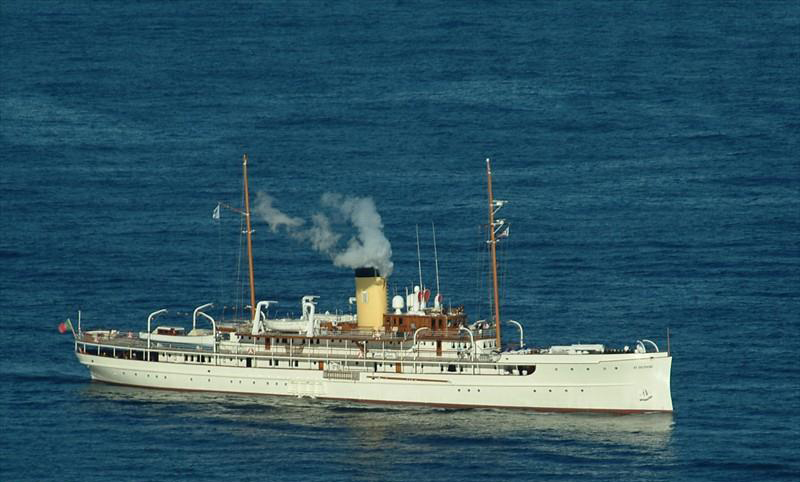 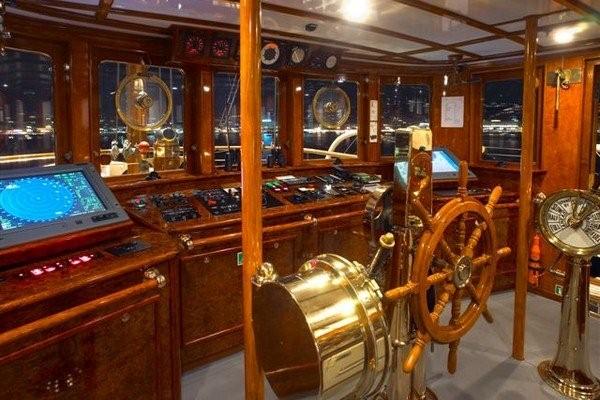 Although pushing 95 years of age, she has SOLAS, MCA, MARPOL, and RINA (Registro Italiano Navale) certifications.

Below is the $40 million asking price 2010 sale video of the Delphine, in which the craft was listed as having the following amenities:

SS Delphine is able to accommodate up to 12 guests, at anchor and in port up to 180 guests. Life aboard is luxurious. Each guest suite has its own en-suite bathroom; TV (flat screen in the two VIP rooms), valuable safe, mini bar, stand-alone music system and telephone enabling both intercom and satellite use. The public areas of the yacht have independent music systems that can be interconnected for parties. In the smoking room WIFI is available. Besides DVD’s there is also Playstation 2 available in the Delphine Lounge; and this on a flat screen TV. There is also a ¾ concert Steinway piano and a Disklavier Yamaha piano; and on request, a lounge bar pianist can be arranged as part of the crew.

Delphine appeared notably for her five minutes of on-screen fame in the movie The Brothers Bloom starring Rachel Weisz and Adrian Brody in 2008, with most of the first act taking place on her decks.

She rents for some 50,000 euros per day and is listed in the top 100 superyachts of the world. Her official registry port is Madeira and her home port is Monaco, France.

For more information on where to write your check to, you can visit her website