Official U.S. Navy Photograph, from the collections of the Naval History and Heritage Command. Catalog #: NH 97970

Here we see the four-piper Omaha-class light (scout) cruiser, USS Omaha (CL-4) besieged by pelicans in harbor, 8 December 1923. She was fast, could hit hard, chase down enemy steamers, and do it all with an air of efficiency.

With the United States no doubt headed into the Great War at some point, Asst. Secretary of the Navy Franklin D. Roosevelt helped push a plan by the brass to add a 10 fast “scout cruisers” to help screen the battle line from the enemy while acting as the over-the-horizon greyhound of the squadron, looking for said enemy to vector the fleet to destroy.

As such, speed was a premium for these dagger-like ships (they had a length to beam ratio of 10:1) and as such these cruisers were given a full dozen Yarrow boilers pushing geared turbines to 90,000 shp across four screws. Tipping the scales at 7,050 tons, they had more power on tap than a 8,000-ton 1970s Spruance-class destroyer (with four GE LM2500s giving 80,000 shp). This allowed the new cruiser class to jet about at 35 knots, which is fast today, and was on fire in 1915 when they were designed. As such, they were a full 11-knots faster than the smaller Chester-class scout cruisers they were to augment.

For armament, they had a 12 6″/53 Mk12 guns arranged in a twin turret forward, another twin turret aft, and eight guns in Great White Fleet throwback above-deck stacked twin casemates four forward/four aft. These guns were to equip the never-built South Dakota (BB-49) class battleships and Lexington (CC-1) class battle cruisers, but in the end were just used in the Omahas as well as the Navy’s two large submarine cruisers USS Argonaut (SS-166), Narwhal (SS-167), and Nautilus (SS-168).

Besides the curious 6-inchers, they also carried two 3″/50s in open mounts, six 21-inch torpedo tubes on deck, four torpedo tubes near the water line (though they proved very wet and were deleted before 1933), and the capability to carry several hundred mines.

Mines on an Omaha class (CL 4-13) light cruiser Description: Taken while the ship was underway at sea, looking aft, showing the very wet conditions that were typical on these cruisers’ after decks when they were operating in a seaway. Photographed circa 1923-1925, prior to the addition of a deckhouse just forward of the ships’ after twin six-inch gun mount. Donation of Ronald W. Compton, from the collection of his grandfather, Chief Machinist’s Mate William C. Carlson, USN. U.S. Naval History and Heritage Command Photograph. Catalog #: NH 99637

Triple 21-inch torpedo tubes on the upper deck of an Omaha (CL 4-13) class light cruiser, circa the mid-1920s. The after end of the ship’s starboard catapult is visible at left. Donation of Ronald W. Compton, from the collection of his grandfather, Chief Machinist’s Mate William C. Carlson, USN. U.S. Naval History and Heritage Command Photograph. Catalog #: NH 99639

Omaha had been ordered during the war but she was not laid down at Todd Dry Dock & Construction Co., Tacoma, Washington until 6 December 1918. Built for a cost of $1,541,396, she was commissioned 24 February 1923 and her nine sisters all joined the fleet within two years after, replacing several prewar designs including the Chesters.

Assigned to the Atlantic Fleet, she spent the early 1920s in calm peacetime service, showing the flag, making training and gunnery cruises, crossing over into the Pacific a few times to visit Canada and Hawaii, and other typical fleet operations. Later she was used to escort the body of the U.S. Ambassador to Cuba, J. Butler Wright– who died at his post after an operation at age 62– from Havana to the Washington Navy Yard.

Passing through the Panama Canal, circa 1925-1926. Note the tropical awning over her stern. Her aft casemates are clear. Catalog #: NH 43054

In 1932, Omaha set a record for a naval crossing between San Francisco and Honolulu– just 75 hours and change to cover 2,400 miles, humming along at an average speed of 32~ knots for three days and nights. Not bad for 1920s technology.

Underway, circa the early 1930s. The original photograph is dated 20 October 1936, but it was actually taken prior to Omaha’s 1933 overhaul, during which her topmasts were reduced and a bathtub machinegun platform was fitted atop her foremast. Official U.S. Navy Photograph, from the collections of the Naval History and Heritage Command.
Catalog #: NH 97971

However, not all was joyous: 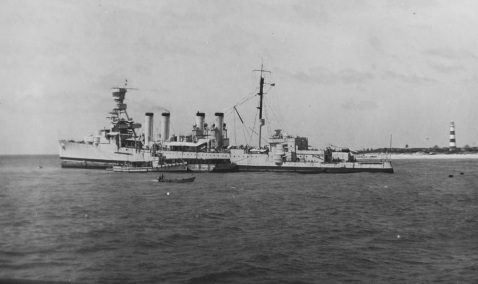 Aground in the Bahamas, 18 July 1937. Note lighthouse at right and vessels alongside Omaha. Meh, these things happen. U.S. Naval History and Heritage Command Photograph. Catalog #: NH 43061 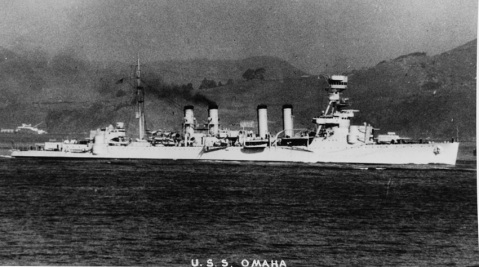 When World War II loomed, the aging cruiser and her sisters were far outclassed by the newer Brooklyn and St.Louis-classes, but they were uparmed by adding 20mm and 40mm anti-aircraft guns and radar while landing some of their older casemates and 1.1-inchers fitted in the 1930s.

On 6 November 1941, while on neutrality patrol in the mid-Atlantic near the equator with her escort, the USS Somers (DD-381), Omaha spied an American flagged ship, the freighter Willmoto out of Philadelphia, and closed to inspect her. When a boarding team came close, the freighter’s crew started abandoning ship, signaling it was sinking.

Taking quick action, the Omaha‘s team went to salvage work and saved the ship, which turned out to be the 5098-tonner Odenwald owned by the Hamburg-American Line. Enroute to Germany from then-neutral Japan when she was seized, she was packed with 3,800-tons desperately needed rubber and tires that never made it to the Third Reich. 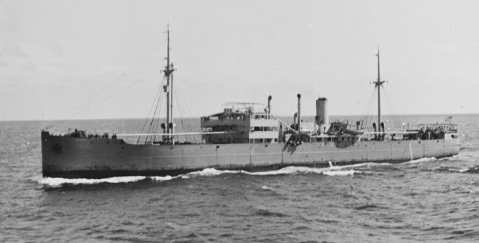 Odenwald was escorted to Puerto Rico and made a big splash when she arrived.

According to the U-boat Archive, Odenwald contained the first German military POW taken by the U.S. though they didn’t know it:

Helmut Ruge was a Kriegsmarine radioman aboard the Graf Spee when that ship was scuttled after the battle of the River Plate. He escaped from internment crossing the Andes on foot to Chile and then on to Japan where he joined the crew of the Odenwald for the return to Germany.

During his initial interrogation both U.S. Army and Navy interrogators failed to discover that Helmut Ruge was not a civilian merchant marine officer but in fact was a German Navy sailor or that he was an escaped internee from the crew of the Graf Spee. Throughout his captivity he was interned with the civilian crews of German merchant ships and not with other German Navy personnel.

When the war kicked off for real, Omaha remained in the Atlantic doing patrol and escort work. 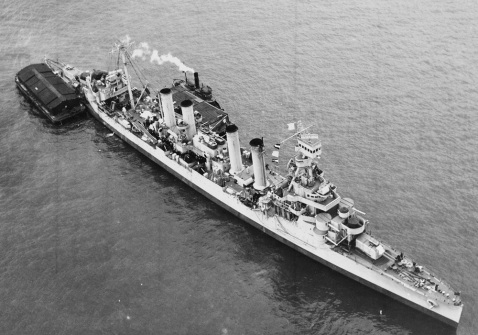 In the lead up to the Dragoon landings in Southern France, Omaha sailed to the med and gave naval gunfire support to the troops going ashore in August 1944, for which she was awarded one battle star, the only one she would receive.

When the war ended, the writing was on the wall for Omaha and she was decommissioned 1 November 1945, stricken four weeks later, and sold for scrap the following February.

Of her sisters, they proved remarkably lucky, and, though all nine saw combat during the war (including Detroit and Raleigh at Pearl Harbor), none were sunk. The last of the class afloat, USS Milwaukee (CL-5) was sold for scrap, 10 December 1949 mainly because after 1944 she had been loaned to the Soviets as the Murmansk.

In one last laugh, a federal court in 1947 awarded the members of the boarding party and the salvage crew $3,000 apiece while all the other crewmen in Omaha and the Sommers at the time picked up two months’ pay and allowances.

Although it has been reported this was prize money “the last paid by the Navy,” the fact is that the ruling classified it as salvage inasmuch as the U.S. on November 6, 1941, was not at war with Germany.

So there is that.

One enduring curiosity of the Omaha‘s crew was the issue of V-42 combat knives to some of her boarding crew.

From RIA who has one of these rare Omaha-marked pig stickers up for auction Sept. 7:

A descendant of the Fairbairn-Sykes combat knife, the V-42 Stiletto was designed with input from members of the First Special Service Force, the joint American/Canadian arctic and mountain warfare unit that is considered one of the forefathers of modern American Special Forces. While the majority went to the 1st SSF, around 70 were diverted to the Navy, and were among the armament issued to the U.S.S. Omaha.

Now that’s something you don’t see every day.