Here we see a Moschetto Regolomentare Ballila Modelo 1891, second from the top, compared to a full sized M91.

These scaled-down Mannlicher-Carcano pattern bolt-action carbines were intended for Italian Fascist Youth training, ssed by the Opera Nazionale Balilla (ONB), 1926-1937 and the follow-on Gioventù Italiana del Littorio (GIL) through WWII. Intended to only fire a 6mm blank cartridge, these diminutive “ballila” pieces were also fitted with an equally small folding bayonet at the end of their 14-inch barrel.

The youngest of these groups intended to receive training were only 6-8 years old and were mustered as units called Figli del Lupa (Children of the She Wolf.) 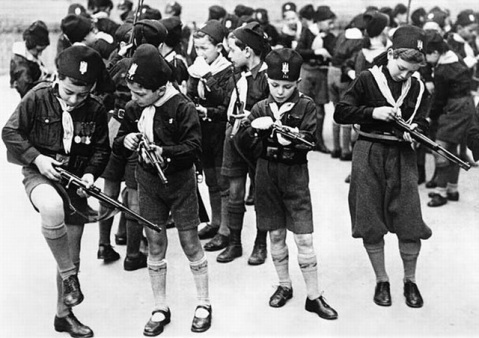