Warship Wednesday, August 23, 2017: ‘Great Scott and huckleberries, look at that!’

Here at LSOZI, we are going to take off every Wednesday for a look at the old steam/diesel navies of the 1859-1946 period and will profile a different ship each week. These ships have a life, a tale all their own, which sometimes takes them to the strangest places. – Christopher Eger

Warship Wednesday, August 23, 2017: ‘Great Scott and huckleberries, look at that!’ 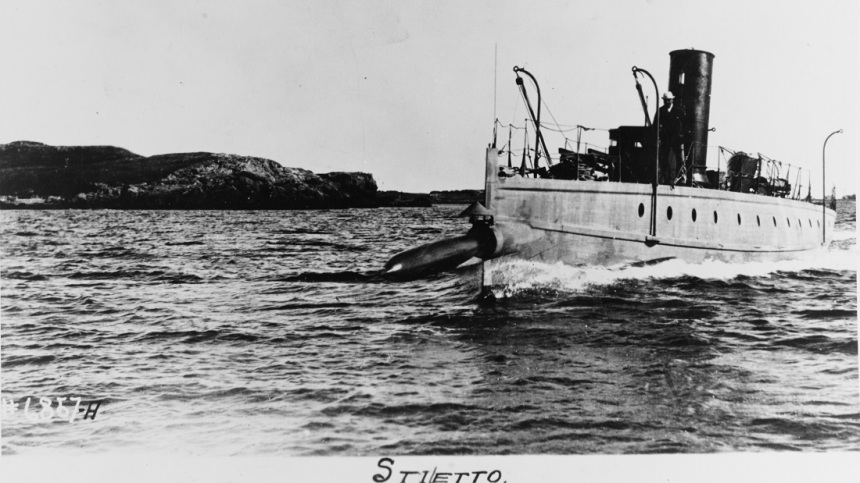 Here we see the experimental 94-foot USS Stiletto, the fastest torpedo boat in the world at the time, firing an early Howell type torpedo from her bow tube around 1890, likely on the Sakonnet River, Tiverton, Rhode Island, home of the Hotchkiss factory’s torpedo test range.

Born in Bristol, Rhode Island in 1848, Herreshoff was a renaissance man of the period when it came to designing steam, sailing and, later, motor yachts. An accomplished sailor as well as a mechanical engineer in the days before Tesla, he ran the famous Corliss Stationary Engine, a 1,000kW dynamo at the 1876 Centennial Exposition in Philadelphia. Returning to Rhode Island, he started the Herreshoff Manufacturing Company in Bristol aimed at boat making as well as other endeavors.

As noted by MIT, from whence he came:

She carried two spar-type torpedoes, basically, bombs on sticks held like lances in front of the craft. Drawing just 22-inches of water, she was perfect for harbor and coast defense. Lightning was bought by the Bureau of Naval Ordnance as Steam Launch No. 6, for $5,000 to be used by the Torpedo Board of Ordnance at Newport, Commander George A. Converse, commanding. 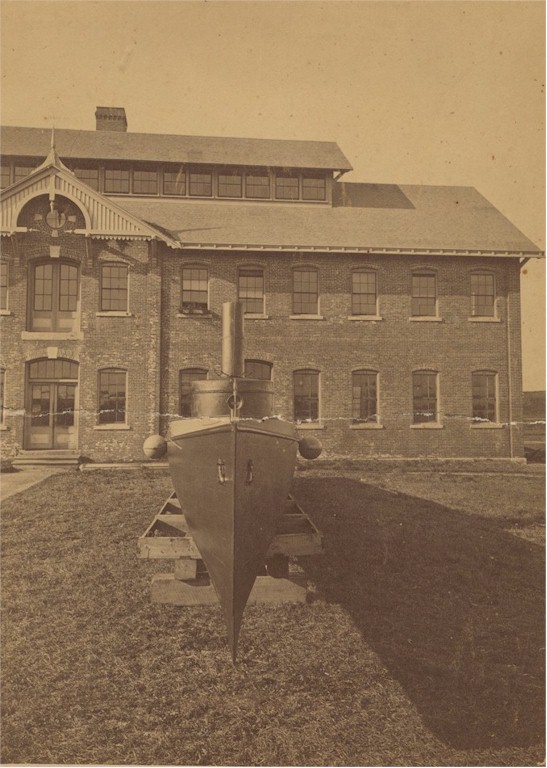 Bow view of the Herreshoff Manufacturing Co.’s SPAR torpedo boat Lightning (Steam Launch No. 6), launched May 1876, and the first torpedo boat purchased by the U.S. Navy. The Lightning is on a wooden cradle in front of an unidentified building, believed to be located at the Naval Torpedo Station, on Goat Island, in Newport, Rhode Island. Note the spar torpedoes in their stored position from where they would be extended before use. Source: John Palmieri, Curator Herreshoff Marine Museum/America’s Cup Hall of Fame.

With over 100 floating projects already worked through, in 1884 Herreshoff built Stiletto (HMCo project 118), a 94-foot wood-planked vessel with steel ribs as an experimental “Torpedo boat type, fitted as yacht.”

Unarmed and fitted with a 7-ft by 7-ft Almy boiler that could produce 359 hp on the inverted compound steam plant, the 28-ton vessel broke 26.4-knots in light condition and was originally rigged as a miniature three-masted schooner as a backup with her little masts looking like “walking sticks.”

With her black hull and neat little white porthole row, the partially decked knife-shaped steamboat made a splash on the yacht club circuit during the 1885 summer season.

On June 10, while on the Hudson River in New York, she raced the 300-foot Hudson company paddle-wheel steamer Mary Powell which had “never been passed on the river” some 30 miles from West 22nd Street to Sing Sing prison.

The Mary Powell. Photo via the Fred B. Abele Transportation History Collection SC22662, Box 26, Folder 11a

According to a New York Times report from the day, a crew member from the speedy “Queen of the Hudson” Mary Powell called out to the tiny Stiletto, “That blamed little boat’ll bust itself tryin’ to beat us!” just before the race started.

Then, the Stiletto‘s skipper waved goodbye.

Needless to say, Stiletto made the 30 mile trip to Sing Sing in something like 77 minutes, smoking her competition.

The next day, she beat the famous racing yacht Atalanta from Larchmont, New York to New London, Connecticut, gaining the title of the fastest ship on the water.

An illustration of the steam yacht Stiletto in her celebrated race against Atalanta, during the American Yacht Club Regatta, from Larchmont to New London, 11 June 1885. Image from The Frank Leslie Illustrated Newspaper. Navsource picture 05040120

With such a glowing record of speed, of course, Stiletto was purchased for the U.S. Navy under an Act of Congress dated 3 March 1887; and entered service in July 1887, attached to the Torpedo Station, Newport where she served alongside her smaller uncle Lightning.

She was commissioned as USS Stiletto, Wooden Torpedo Boat no. 1, WTB-1 (not to be confused with the later Warship Weds alum USS Cushing, a steel-hulled vessel, which was Torpedo Boat no. 1, TB-1) and was the Navy’s first torpedo boat capable of launching self-propelled torpedoes.

Made ready for war, her masts and sailing rigs were removed, wheelhouse reduced to a hatch, and was given a bow tube and trainable deck tube for LCDR John Howell’s Automobile Torpedo. Some 50 Howells had been ordered under contract through the Hotchkiss Ordnance Company of nearby Providence as the Mark I Torpedo. Why not have the Navy’s first real torpedo boat armed with its first real torpedo? 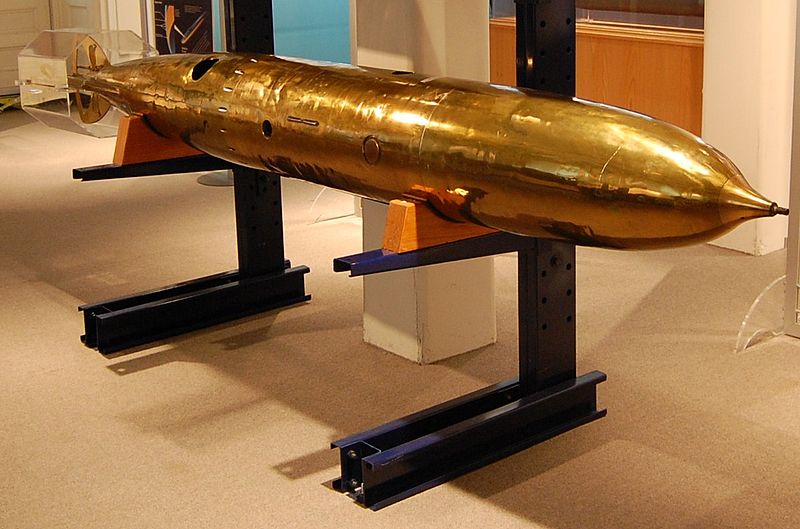 One of Howell’s Mk1 Locomotive torpedoes.

Capable of 25-knots, these early 14.2-inch wide fish had a 96-pound wet gun cotton warhead and could make 600 yards before running down the wind-up flywheel powered engine. Stiletto tested many of these on the company’s range in Tiverton.

They remained in service until 1896 when they had all (save for two, including the one  shown above at the Newport Museum) been expended.

Stiletto spent her entire naval career at the Torpedo Station, and as noted by the curator of the Herreshoff Museum, she was taken out of the water over the winter for maintenance.

She did, however, make it to Hampton Roads and back to the Hudson periodically for naval reviews and parades.

Stiletto. Likely firing a Bliss model fish from her bow tube. Note the different nose shape from the Howell. 1900 via National Archives 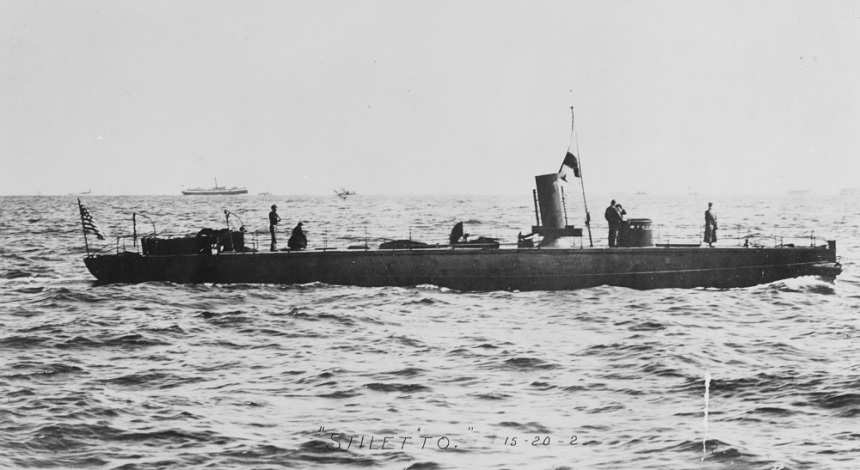 From left to right, the USS Porter (TB-6), USS Stiletto (WTB-1), and USS Cushing (TB-1) in Narragansett Bay. Nathanael Herreshoff was on board the Porter when this photograph was taken, and recorded the date in his diary as having been on December 18, 1896. Source: John Palmieri, Curator Herreshoff Marine Museum/America’s Cup Hall of Fame; http://www.herreshoff.org, DeGolyer Library, Southern Methodist University

Besides testing the Howell and later Bliss model Whitehead torpedoes after 1891, Stiletto was used for special missions such as “running 12-hour high-speed trips delivering 2 tons of smokeless powder to New York ammunition depots.”

Reboilered in 1891, she was later fitted with an oil-fired suite which proved unimpressive.

By 1897, on the cusp of the Spanish-American War, the Navy had worked out torpedo tactics, had over 300 torpedoes in their magazines and a score of relatively ocean-going steel-hulled torpedo boats, none of which would have been possible without Stiletto.

During the war, she provided coastal defense duties and lingered on for a decade longer, marked for disposal after nearly 25 years as a floating test bed.

Struck from the Navy list on 27 January 1911, she was sold six months later to James F. Nolan of East Boston, Mass., for scrapping. 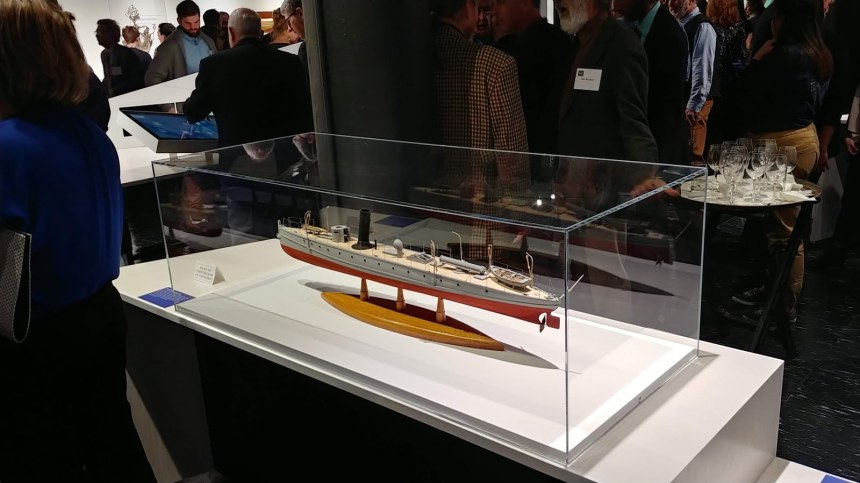 A model of Herreshoff’s Stiletto, borrowed from the Naval War College, will be on display at the MIT Museum until at least 2021. http://navalwarcollegemuseum.blogspot.com/2018/11/nwcm-torpedo-boat-model-now-on-display.html

As for the Howells, in 2013, Space and Naval warfare Systems Center Pacific (SSC Pacific) discovered and recovered a spent Howell off the San Diego coast, near Hotel Del Coronado, during a mine-hunting training exercise with Navy dolphins.of stamped. Stamped “USN No. 24” it is only the third known to exist, with the other two held in the collection of the Naval Undersea Museum in Keyport, Wash. and the Naval War College Museum in Newport.