So yeah, it is national rodent meteorologist day…

And in celebration, here is a picture of the Ton-class minesweeper HMS Packington: 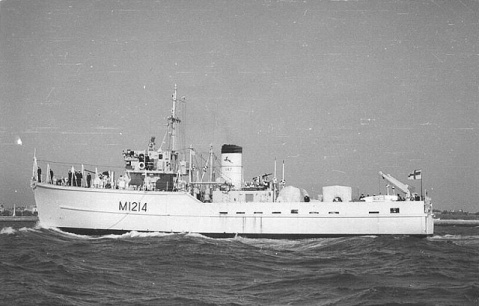 After service in the Royal Navy for a few months in 1959, the little minesweeper was transferred to the fledgling South African Navy and recommissioned as SAS Walvisbaai. Under the South African flag, she served for 41 years during the darkest days of that country’s fight against Soviet/Cuban-backed forces to the North.

Still don’t get it?

The humble 153-foot/440-ton vessel was then sold on the surplus market for a song and subsequently used in 2003 as the R/V Belafonte in the Wes Anderson film The Life Aquatic with Steve Zissou, filling in, of course, for Jacques-Yves Cousteau’s famous R/V Calypso, herself the retired 136-foot Royal Navy minesweeper HM J-826.

Now you get it…

Packington/Walvisbaai/Belafonte is now a yacht, the Mojo, under private ownership.

Calypso, long out of service after sinking in an accident in 1996, is being refurbished under the direction of the Cousteau Society for use as a museum.