Warship Wednesday, March 7, 2018: The ‘most fightingest ship’ of the Great North

Posted on March 7, 2018 by laststandonzombieisland 2 comments

Here at LSOZI, we are going to take off every Wednesday for a look at the old steam/diesel navies of the 1859-1946 time period and will profile a different ship each week. These ships have a life, a tale all their own, which sometimes takes them to the strangest places.- Christopher Eger

Warship Wednesday, March 7, 2018: The ‘most fightingest ship’ of the Great North

Here we see the British-built Tribal (Afridi)-class destroyer Her Majesty’s Canadian Ship (HMCS) Haida (G63) of the Royal Canadian Navy, as she appeared during WWII. One of Canada’s most celebrated vessels, this “little tin can that could” has an impressive record and is still around today taking the “Queen’s shilling” so to speak.

The Afridi‘s were a new type of destroyer designed for the Royal Navy in the late 1920s off experience both in the Great War and to match the large, modern escorts on the drawing boards of contemporary naval rivals of the time.

The Royal Canadian Navy’s HMCS Huron (G24), in dazzle camouflage, sailing out to sea during the Second World War during one of her countless trans-Atlantic escorting runs. The Tribal-class destroyer, commissioned on July 28,1943, also served in the Pacific theatre during the Korean War under the new pennant number 216.

These 378-foot vessels could make 36+ knots on a pair of geared steam turbines and a trio of Admiralty three-drum boilers while an impressive battery of up to eight 4.7″/45 (12 cm) QF Mark XII guns in four twin CPXIX mountings gave them the same firepower as early WWI light cruisers (though typically just three turrets were mounted). 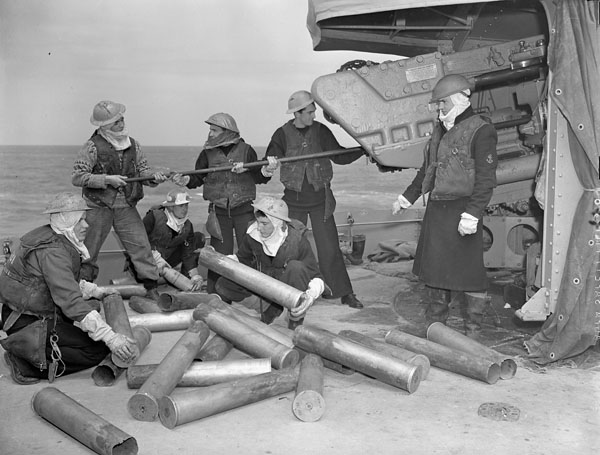 Gun crew on Tribal-class destroyer HMCS Algonquin cleaning up their 4.7″/45 (12 cm) Mark XII guns after firing at the Normandy Beaches on 7 June 1944. Note that the crewman kneeling in the rear is holding a 4.7″ (12 cm) projectile. Library and Archives Canada Photograph MIKAN no. 3223884

Some 32 Afridi‘s were planned in eight-ship flights: 16 for the RN (named after tribal warriors: HMS Cossack, HMS Eskimo, HMS Sikh, HMS Zulu, et. al), eight for the Royal Australian Navy, and eight for the Canadians. Of the Canadian ships, four were to be built by Vickers in the UK and the other four by Halifax shipyards in Nova Scotia. All the Canadian ships were to be named after First Nations tribes (Iroquois, Athabaskan, Huron, Haida, Micmac, Nootka, Cayuga, etc.)

The subject of our tale, HMCS Haida, was the last of the Canadian Tribals built in the UK, laid down at Vickers 29 September 1941. She commissioned during the height of the Battle of the Atlantic, on 18 September 1943.

As noted by Gordon Smith, Naval-History.Net, Haida immediately began working up with the Home Fleet based at Scapa Flow and just a scant two weeks later was operational, heading on a mission to reinforce the icy Spitzbergen garrison and provide a covering force for Lend-Lease minesweepers headed to the Soviets past heavily defended German-occupied Norway.

Then between Nov. 1943 and Jan 1944, Haida would be part of no less than five dangerous runs through U-boat and Scharnhorst-infested waters between the UK and Kola Pen, shepherding freighters to fuel Uncle Joe’s war machine. Speaking of Scharnhorst, Haida was present just over the horizon at the Battle of North Cape when the mighty German capital ship was sent to the bottom.

Next, she was assigned to escort a raiding force to Norwegian waters consisting of the Free French battleship Richelieu, the battlewagon HMS Anson and several fast cruisers. Once that went off uneventfully, Haida was tasked to Operation Neptune, the Normandy Landings, and transferred to the English Channel.

Filling her time escorting forays into mine and E/S-boat infested coastal waters along the French coast, Haida traded naval gunfire and torpedoes with German shore batteries and torpedo boats, coming away unscathed but leaving the Elbing-class torpedo boat T29 dead in the water in a sharp nighttime action in April 1944. One of her sisters, HMCS Athabaskan, was not so lucky and sank in the same action.

When the D-Day balloon went up, she spent her time on the patrol line between Ile de Bas and Ile de Vierge and, on 9 June, with three of her sisterships, engaged four German T-boats and destroyers. The action left one German sunk, another hard aground, and the final pair limping away to lick their wounds. 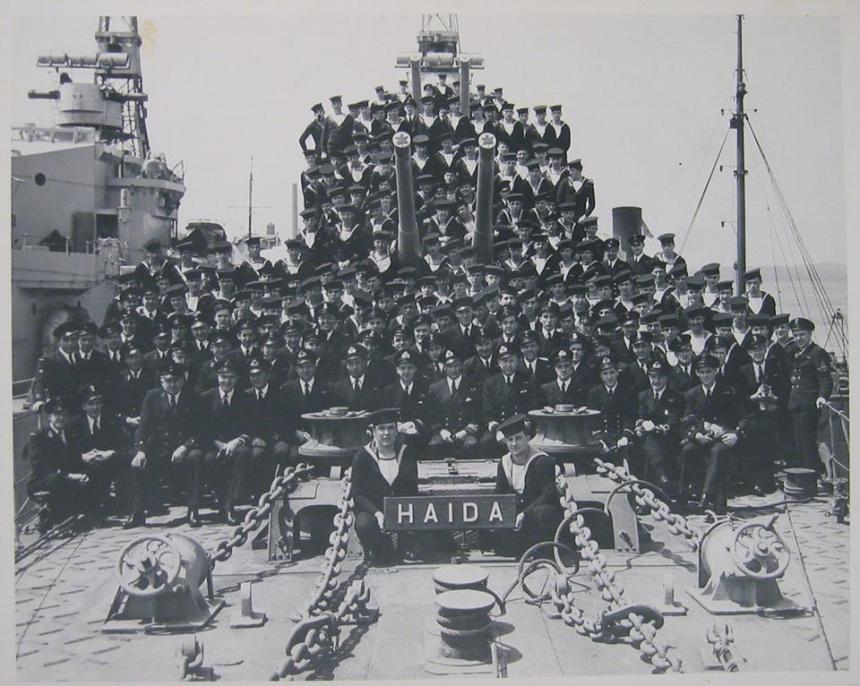 On 24 June 1944, Haida racked up a confirmed kill on the German U-971 (ObrLt. Zeplien) off Brest in conjunction with the RN destroyer (and sistership) HMS Eskimo and a B-24 Liberator flown by the Free Czechs (Sqdn. 311). The event, as chronicled by Haida, included nine attacks by the destroyers and ended with a surface action in the English Channel as the stricken sub crashed to the surface and men started to abandon ship.

It was decided to attack without waiting for ESKIMO to regain contact and pattern “G” had been ordered when at 1921 the submarine surfaced about 800 yards ahead at an inclination of about 100 left. Fire was opened from “B” gun and a hit obtained on the conning tower, with the second salvo. High Explosive was used and penetrated the conning tower, starting a fire, the flames being clearly visible through the hole made. No further hits were obtained with main armament and fire was checked as soon as it was apparent that the enemy did not intend to fight. Close range weapons were used during the same period.

Lost was one German submariner, while Haida and Eskimo picked up 52 survivors (including six were injured, three seriously) and brought them to Falmouth in the predawn hours of 25 June.

U-BOAT KILLER’S MASCOT. 26 JUNE 1944, PLYMOUTH, ON BOARD THE CANADIAN DESTROYER HMCS HAIDA, WHICH WITH HMS ESKIMO DESTROYED A U-BOAT IN THE CHANNEL. (A 24385) Dead-eyed Jock Macgregor who was the first to open fire with his Oerlikon on the U-boat destroyed by the HAIDA and HMS ESKIMO. Copyright: © IWM. Original Source: http://www.iwm.org.uk/collections/item/object/205156267

August saw Haida maul a convoy of small German coasters off Ile d’Yeu. In a single wild action on the night of 9 August 1944, she is credited with assisting in the sinking of at least nine Axis ships including two destroyers, two T-boats, a U-boat, a minesweeper, patrol boat, and two armed trawlers.

By September, the Canadian war baby headed for her home country for the first time, to get a badly needed refit at Halifax. Early 1945 saw her sortie back to Europe where she was engaged off Norway again, escorted some more convoys to Russia, and was among the first Allied ships to enter the key Norwegian port of Trondheim post-VE-Day. Returning to Canada, she was to be made ready to fight in the Pacific against the Japanese but never made it that far before the A-bombs ended the war unexpectedly.

Laid up in reserve, by 1947 she was reactivated and soon put to effective use.

In November 1949, Haida again showed her worth to an ally by standing seaward and plucking the surviving crew of a USAF Boeing B-29 Superfortress of the 2nd BS, 27th BG on its way to RAF Sculthorpe. The aircraft, 42-65289, flew as Dina Midget in WWII over Japan and went down some 385 miles North East of Hamilton, Bermuda. Following the accident, 18 crewmen took refuge in dinghies while two others were drowned. Spotted by SAR aircraft, Haida picked the men up after 76 hours adrift.

By 1950, she served off Korea as part of the Canadian contribution to the UN forces in that conflict, completing two tours in those far-off waters. 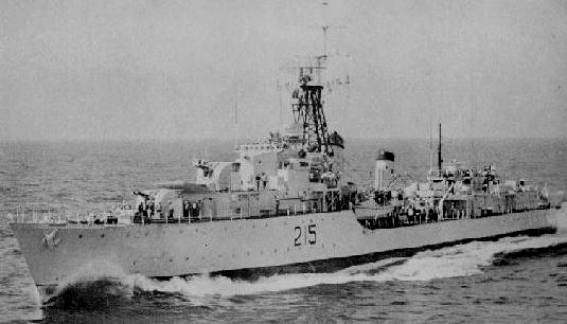 In 1952, an extensive refit saw her reconfigured as a destroyer-escort (pennant DDE-215) which saw her WWII sensors replaced by a more modern SPS-6C air search radar and SQS-10 sonar. Her main armament, those six beautiful 4.7-inch rapid fires, was swapped out for a more conservative pair of twin 4-inch Mk16s. Her depth charges replaced with a Squid ASW mortar. This would be her final configuration for her last decade in active service, and the one she would carry into her later days.

Rescued from the streets of Japan, Pom Pom served as Haida’s mascot during the ship’s first tour of duty in Korea (Parks Canada)

A 1930s design in the jet age, Haida was decommissioned in October 1963 after 20 years of hard service.

Overall, when compared to her sisters, she was a lucky ship and outlived her family. No less than 12 of the 16 Tribals in British service were lost during WWII and the remaining quartet were all paid off by 1949. All the Tribals in Canadian service were sold to the breakers by 1969. The three Australian ships that were completed (five were canceled) likewise were turned to razor blades. 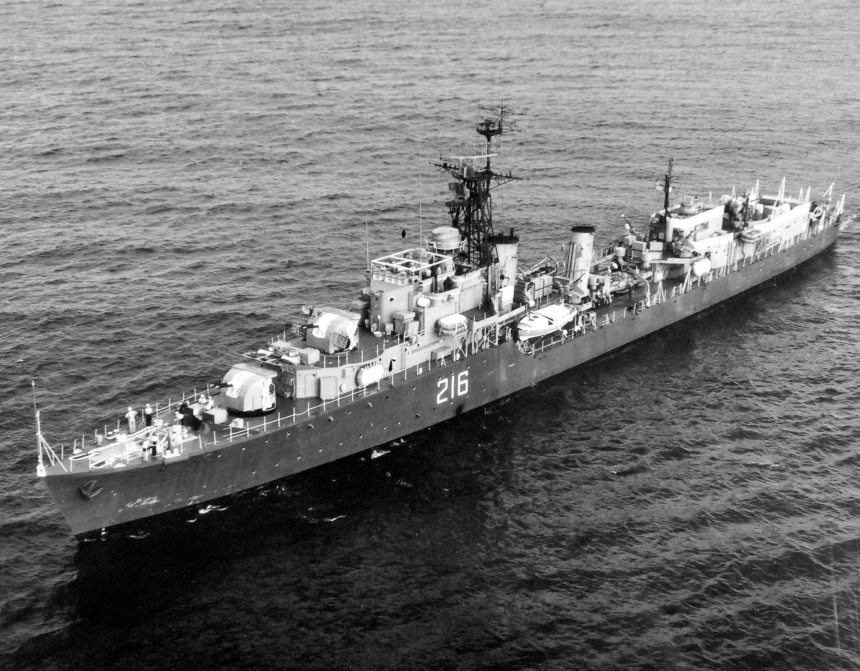 Haida was the last of her class remaining in any ocean and, after an effort by concerned citizens, she was towed to Toronto and opened as a museum ship in 1965. Over the next three decades, she still hosted sea cadet camps and Canadian Forces events in addition to her work a floating memorial, known as “Canada’s most fightingest ship”.

In 2003, she was moved to Hamilton, Ontario where she had been a National Historic Site ever since, operated by Parks Canada on a seasonal basis.

Earlier this year, she was named ceremonial Flagship of the Royal Canadian Navy with an honorary commanding officer chosen from the Navy, is authorized to fly the Canadian Naval Ensign, and the ship will observe traditional sunrise and sunset ceremonies as well as arrival announcements on the gangway.