Yes, SiCo is still in the new suppressor biz

Ten years ago, Utah-based SilencerCo jumped out of nowhere and began making some of the best cans on the market. In 2014, they broke the mold with the Salvo, a modular 12 gauge suppressor. Then came the Maxim integrally-suppressed 9mm pistol. The Maxim 50 silenced muzzleloader. The Chimera, Octane, Sparrow, Omega, Saker, Harvester, Osprey, Warlock, the list goes on.

I spoke to company founder Josh Waldron in 2016, when SiCo was pushing out a staggering 10,000 suppressors of all kinds every month. In the business of suppressors, that is Glock-like numbers. Back then, everything seemed like it was roses.

Then came the elusive promise of the Hearing Protection Act, the change in Rule 41F which triggered a melt-down for those buying with trusts, and the change in White House administrations with the resulting “Trump slump” in gun sales– all of which chilled new suppressor sales a bit. This triggered smaller silencer companies to go belly up, others to get bought out (e.g. S&W picked up Gemtech) and layoffs at SiCo, along with Waldron’s stepping down as the head banana.

So even with the bad news in the suppressor industry the past two years, it is great that things are looking up– and SiCo is still debuting good new stuff.

Both of these cans are the Switchback…

Following up on past success with modular suppressors, such as the Salvo, the Switchback can be configured in three different lengths, ranging from 2.5- to 5.75-inches, with corresponding performance. 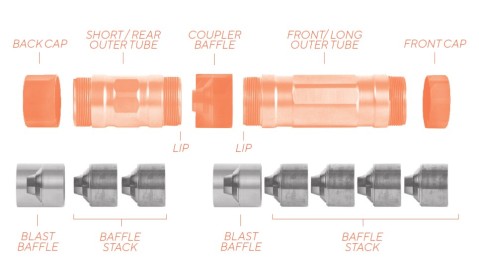 The Switchback is modular and user-configurable.

In its most optimized configuration, a company whitepaper lists the suppressor as delivering an average of 108 dB sound report while mounted on a rifle using standard testing methods. Even in its shortest 3.2-ounce stack, the suppressor is hearing-safe when mounted to a 16-inch barrel.

Which is mad quiet.