Yes, a Navy dive bomber on a dirt road in North Africa. It happened.

Below we have a U.S. Navy SBD (Scout Bomber, Douglas) Dauntless dive bomber, likely of Carrier Air Group 4’s VS-41 “Tophatters,” using a road as a makeshift runway, near Safi, Morocco, in November 1942. The historic port, about 140 nautical miles south of Casablanca, had been captured just hours before by three WWI-era U.S. Navy destroyers carrying a raiding force of light infantry in the opening moves of Operation Torch, the invasion of French North Africa. 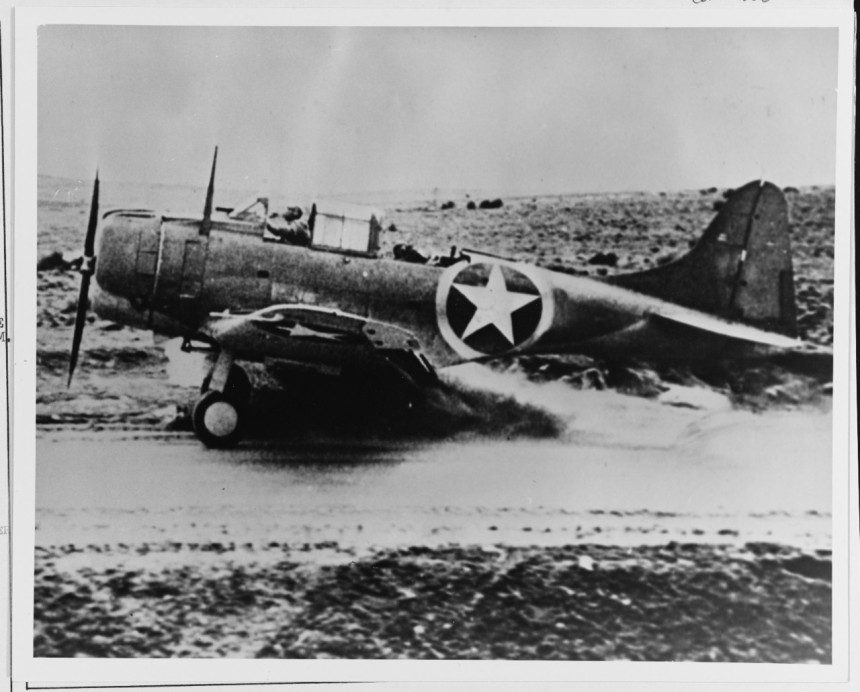 Note special insignia used during this operation, with a wide white circle around the regular star & circle emblem, predating the Invasion Stripes of D-Day.

Developed by the famous ‎Ed Heinemann (father of the A-20 Havoc, A-26 Invader, A-1 Skyraider, A-4 Skyhawk, et al), the SBD was perhaps the most iconic carrier-borne strike plane of the war, with four squadrons of them responsible for scratching all four Japanese flattops at Midway, disabling three of them in the span of just six minutes. They also proved their mettle at the Coral Sea and in the Guadalcanal campaign with many, as evidenced above, operated from shore.

The SBD was probably from USS Ranger (CV-4) who for the Torch Landings had 18 such aircraft in VS-41. Another 18 SBDs were carried, nine each, on *two escort carriers USS Sangamon (ACV-26) and USS Santee (ACV-29). SBDs from Ranger, besides proving their worth plastering land-based targets, had also socked the French battleship Jean Bart on 10 November 1942 in Casablanca harbor with a pair of 1,000-pound bombs, finishing what the battleship USS Massachusetts had started.

VS-41 lost three aviators in North Africa– ARM George E. Biggs, Ens Charles E. Duffy, and ARM Aubra T. Patterson– and had four others shot down and captured (briefly) by the French. Founded in 1919, VS-41’s lineage is today carried by VFA-14, flying F/A-18Es.

*Two other escort carriers took part in the Torch landings but did not carry SBDs: USS Suwanee (ACV-27) with 29 F4F Wildcats and nine TBFs, and USS Chenango (ACV-28) carrying a load of 76 Army P-40Fs on a one-way trip.