Going back to Guam, 75 years ago today

Offical Caption: “5 August 1944. Home Again – Col. Merlin F. Schneider (kneeling, left), Commanding Officer of the Marine unit that recaptured the Marine Barracks on Orote Peninsula, Guam, holds the plaque that was removed by the Japanese when they took possession of the barracks and the island nearly three years earlier.” 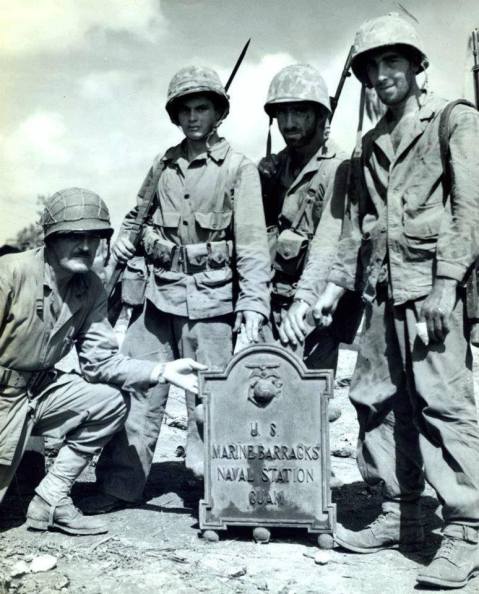 The three Marines, who located the plaque and presented it to the Colonel, stand behind it. They are (left to right): Privates First Class John C. Brown; Carmen J. Catania; and Corporal Joseph J. Mannino.

Others also got into the act of posing with the recovered sign. 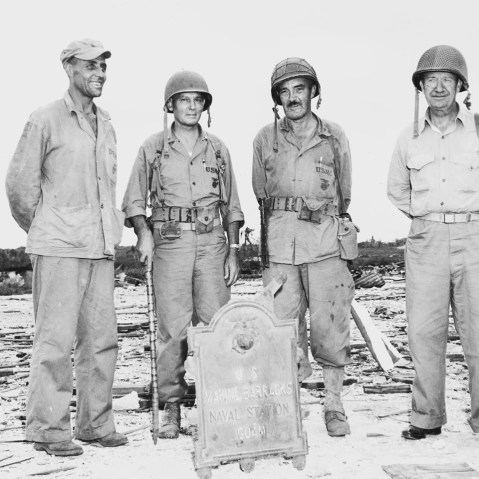 On 21 July 1944, the 3rd Marine Division launched an amphibious assault to liberate and recapture Guam during World War II as part of Devil Dog-heavy III Amphibious Corps. They faced over 18,000 Japanese defenders during the battle, which lasted until August 10th (although mopping-up operations continued for several months). Of the 7,800 American casualties, some 7,000 were Marines.

Today, the Guam Barracks plaque is in the collection of the U.S. Marines Museum