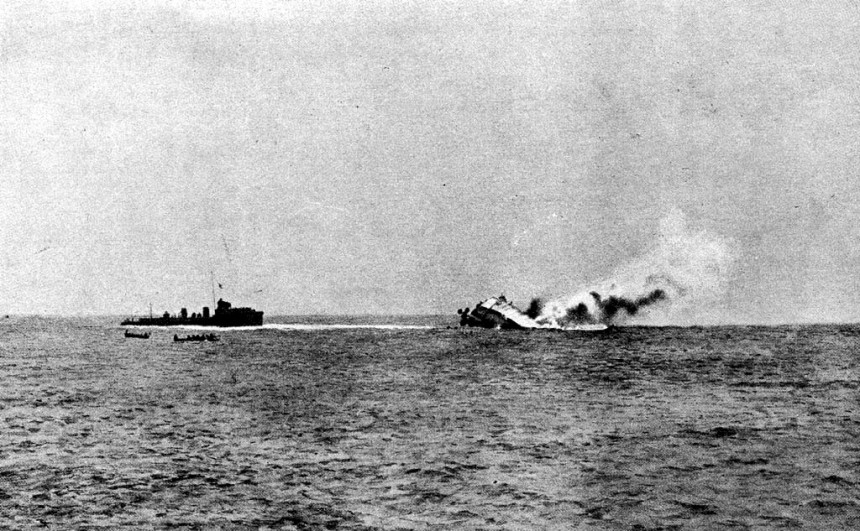 On this special installment of WW, we see the German Kolberg-class light cruiser (kleiner kreuzer), SMS Mainz, sinking at the Battle of Heligoland Bight on August 28, 1914, 105 years ago today. The ship on the left is the British RN destroyer HMS Lurcher taking off German survivors. The whaleboats are from the destroyer HMS Liverpool. Commissioned in 1909, Mainz had a short career that ended with a last stand against overwhelming odds.

Four 4,200-ton Kolbergs were commissioned on the lead up to the Great War: Kolberg, Mainz, Cöln, and Augsburg. Just 4,300 tons, they would be considered frigate-size these days. Not particularly fast, they could make 25 knots. Not particularly well-armed, they mounted a dozen 4.1-inch SK L/45 single mounts as well as a couple 17.7-inch torpedo tubes, in all, really just large destroyers.

Still, they had fine lines. 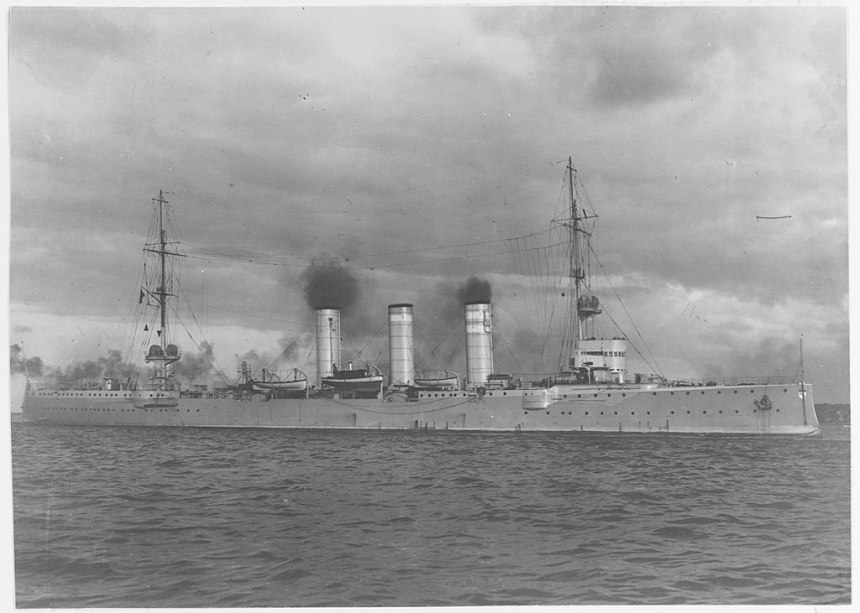 SMS Mainz photographed by Arthur Renard of Kiel, in a photograph received by U.S. Naval intelligence on 19 October 1910. NH 4682 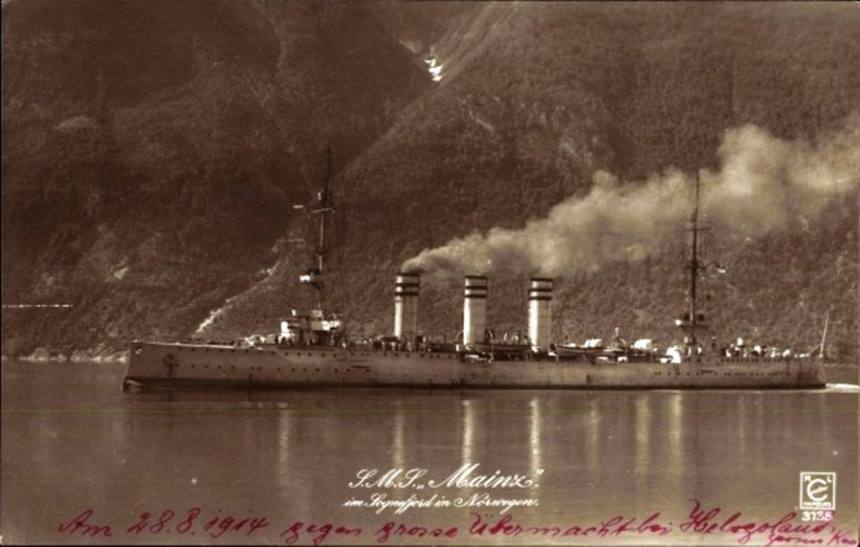 Resting in the Ems and Jade rivers, respectively, on the morning of 28 August 1914, Mainz and Cöln (the latter with II Scouting Group commander RADM Leberecht Maass aboard), Hipper ordered both ships to raise steam and sail to aide a force of German coastal torpedo boats and minesweepers operating near the North Sea’s Heligoland Bight that had been jumped by a superior RN force at around 0930.

It was a bloody day for the High Seas Fleet among the fog and smoke. 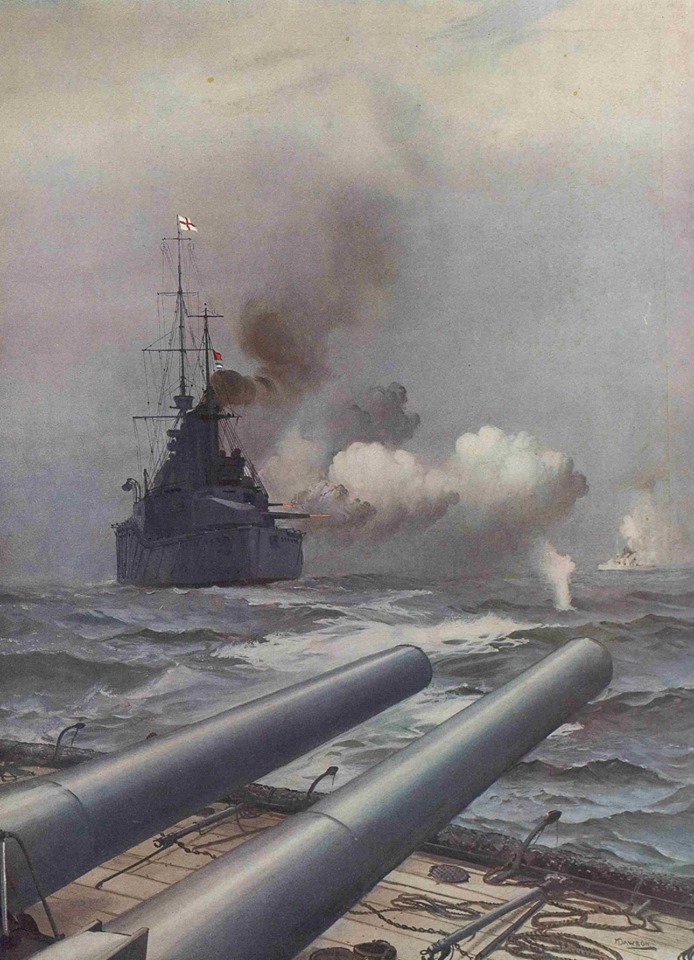 Although Maass was able to piece together not only the Mainz and Coln but also the light cruisers Frauenlob, Stettin, Ariadne, and Strassburg, they were vastly outmatched by the British capital ships. Worse, half of these were destroyed piecemeal.

Very shortly after arriving on the scene, the German cruisers got plastered by the British heavy guns and attempted to withdraw. In the process, Frauenlob, Strassburg, and Stettin were heavily damaged but made a getaway.

Ariadne returned fire as best she could, but to no effect and was left dead in the water to capsize by 16:25.

Coln was similarly lost, with Maass aboard, at about 14:25, rolling over and sinking with only one crewmember, a stoker, pulled from the water three days later.

As for Mainz, who had arrived on the scene alone at about 12:30– before the other cruisers– over a 45-minute period she engaged three British cruisers and at least six destroyers. The German scored hits on the RN Laforey (or L-class) destroyers Laurel, Liberty, and Laertes with Laurel hurt so bad she had to withdraw, and Laertes disabled by 4-inch shells to her engine room.

However, the odds were clearly against Mainz and, after taking a torpedo from the destroyer Lydiard and just generally receiving a shellacking from the British guns at point-blank range, her skipper ordered the crippled vessel abandoned just before she rolled over at 14:10. 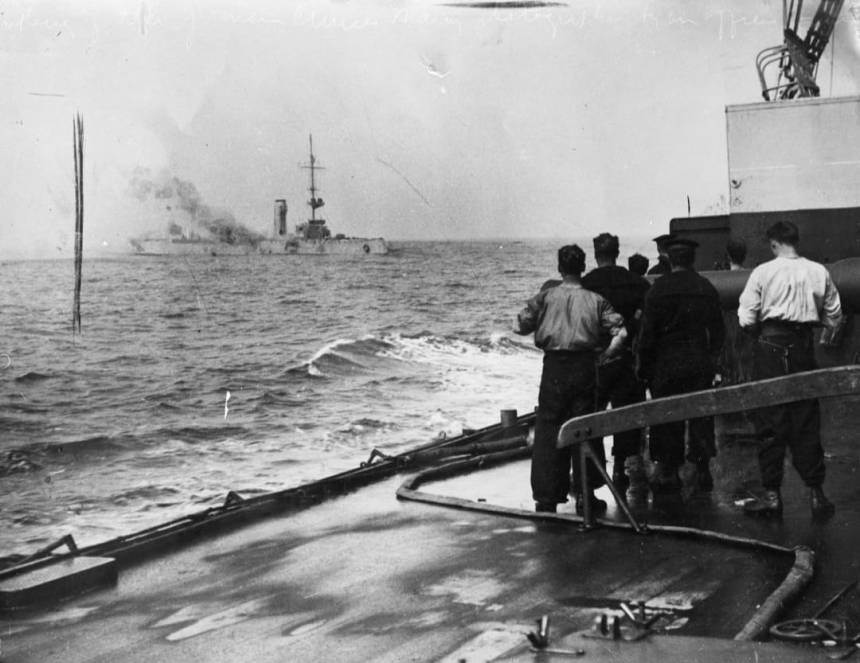 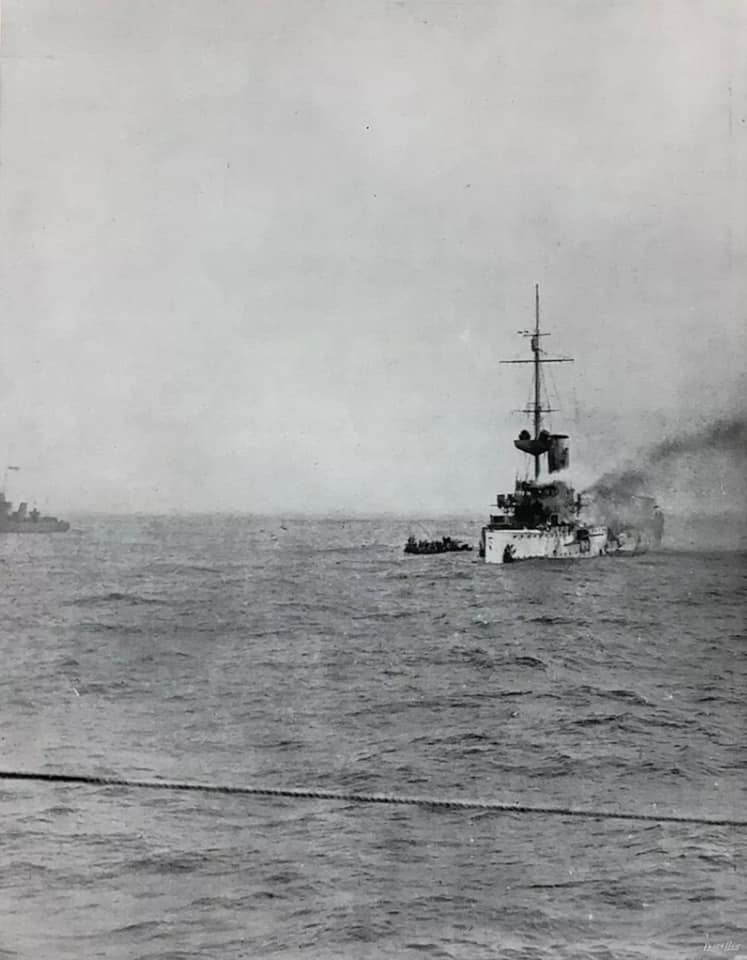 The images of her sinking were the first sinking German ship published in British papers and circled the globe, complete with Mainz shown aflame and dead in the water with just one of her stacks still standing. 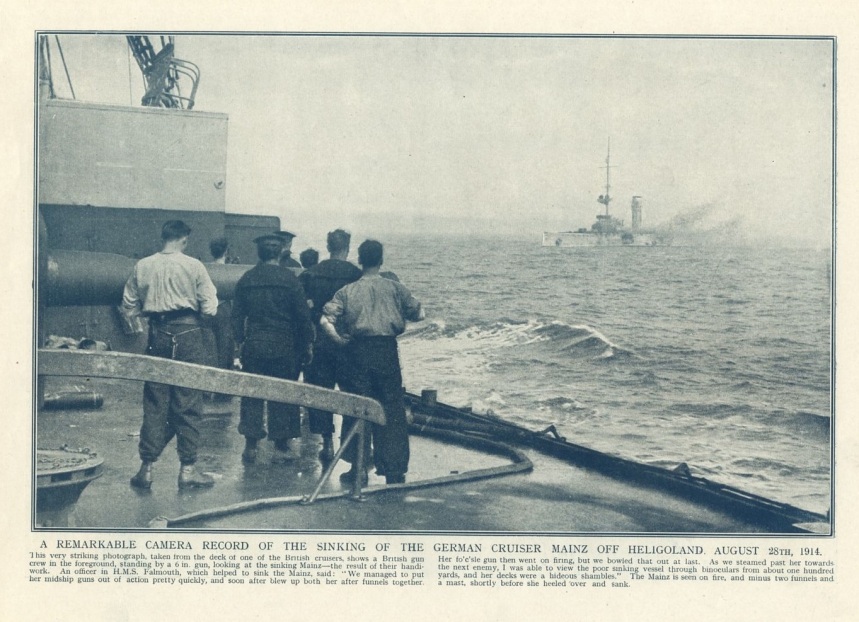 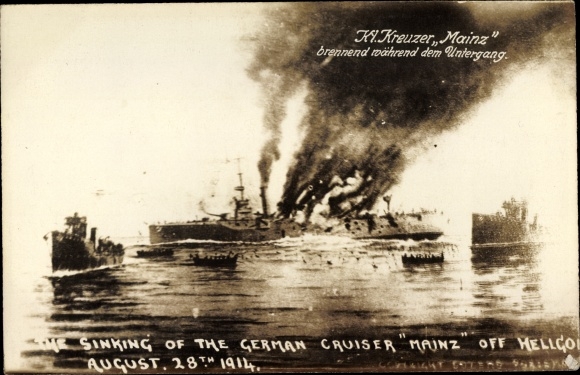 The engagement soon became iconic in period maritime art published not only in London but also Berlin. 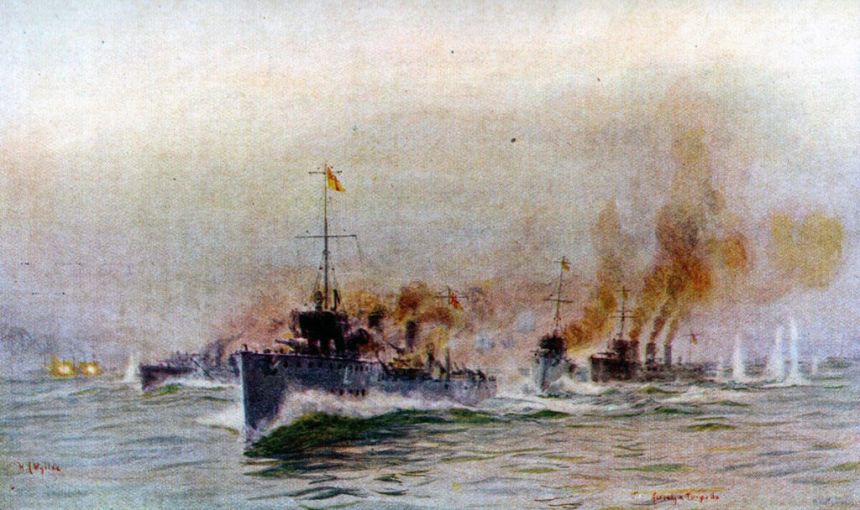 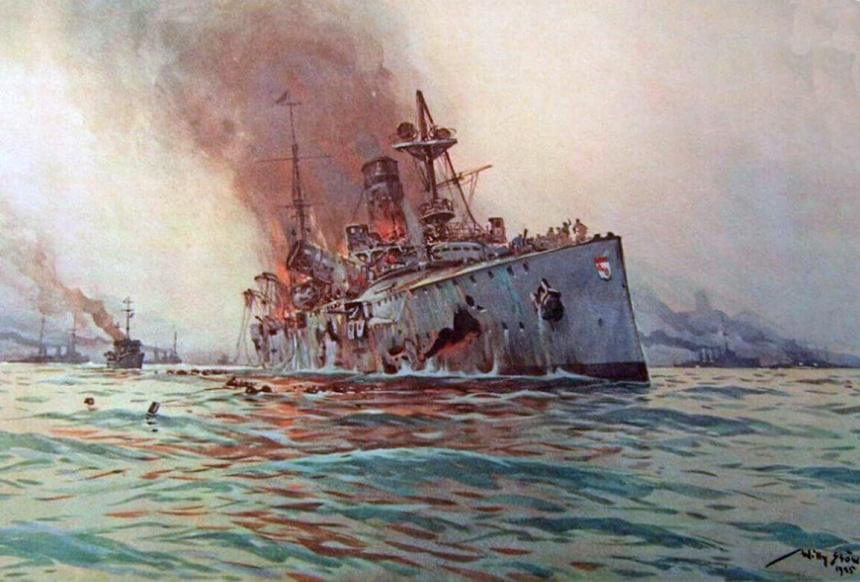 RMG PW1231: ‘L-class destroyers and the battlecruisers ‘Lion’, ‘Queen Mary’, and ‘Princess Royal’, with the ‘Mainz’, at the Battle of the Heligoland Bight, 28 August 1914′ by William Lionel Wyllie circa 1915 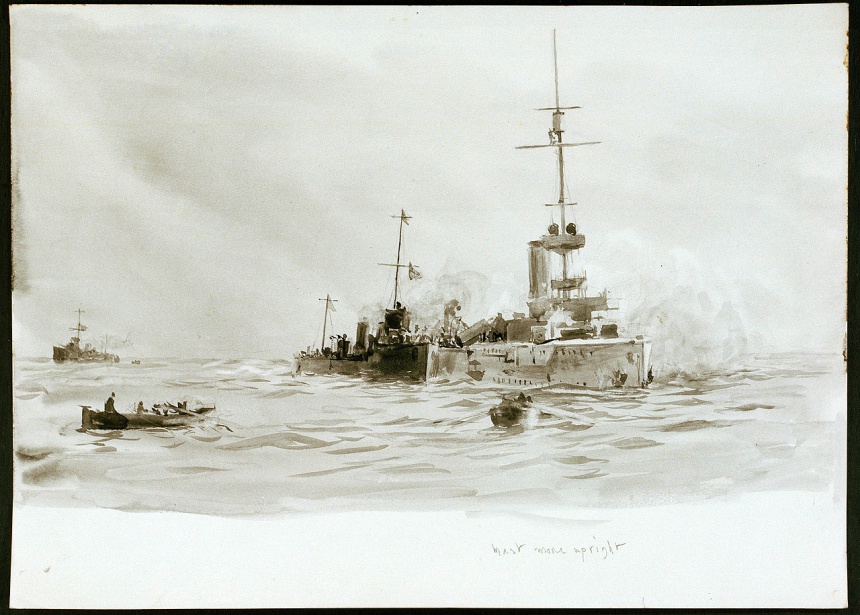 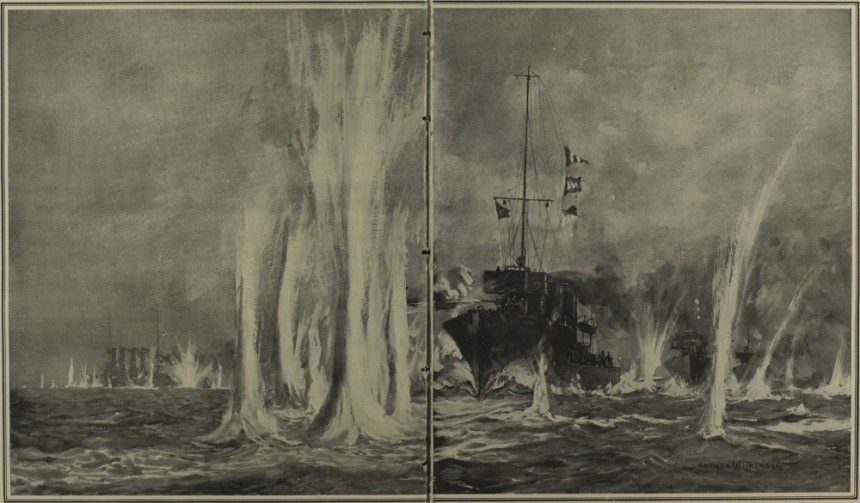 The British rescued 348 survivors from the stricken ship, including the son of Tirpitz himself. She took 89 members of her crew, including her skipper, down to the cold embrace of the sea.

Other than the cruiser HMS Arethusa, which had been damaged in a 6-inch gun duel between that ship and the German cruisers SMS Frauenlob and Stettin, it was the stricken Mainz that caused the most injury to the Royal Navy on that fateful day. 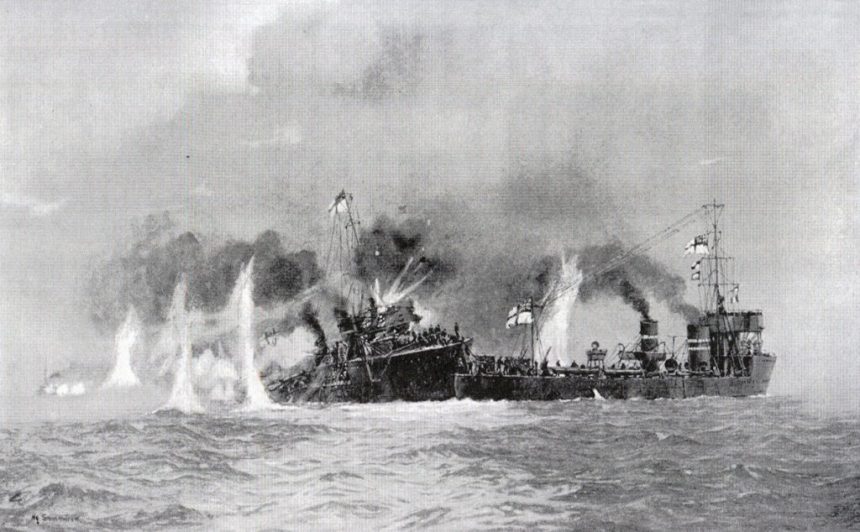 HMS Lapwing of 1st Flotilla attempting to take HMS Laertes of 3rd Flotilla in tow during the Battle of Heligoland Bight on 28th August 1914 in the First World War. “Deeds That Thrill the Empire: True Stories of the Most Glorious Acts of Heroism of the Empire’s Soldiers and Sailors during the Great War.” V. Ludgate Hill, London: The Standard Art Book Co Ltd. 1920. p. 737. Wiki Commons 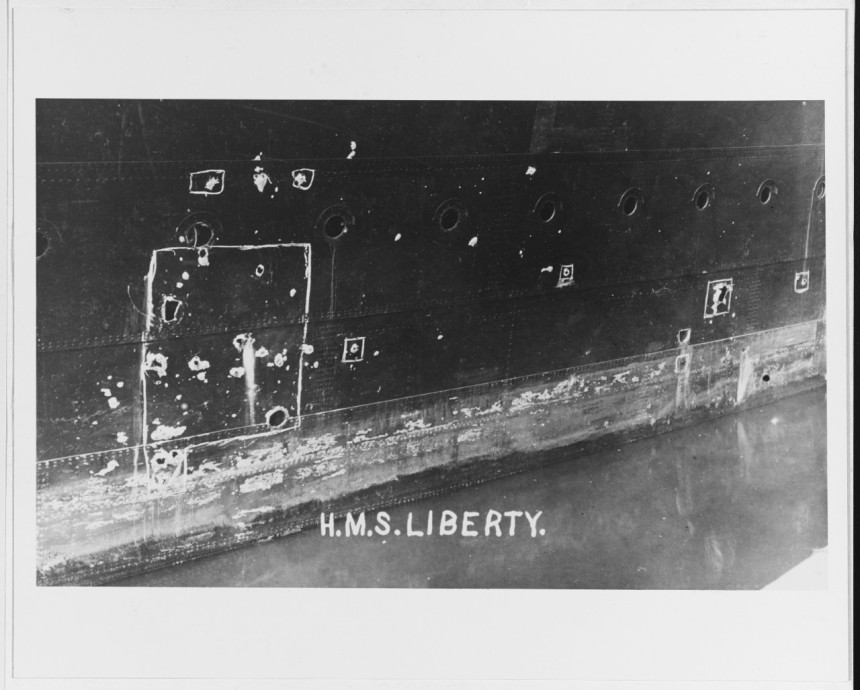 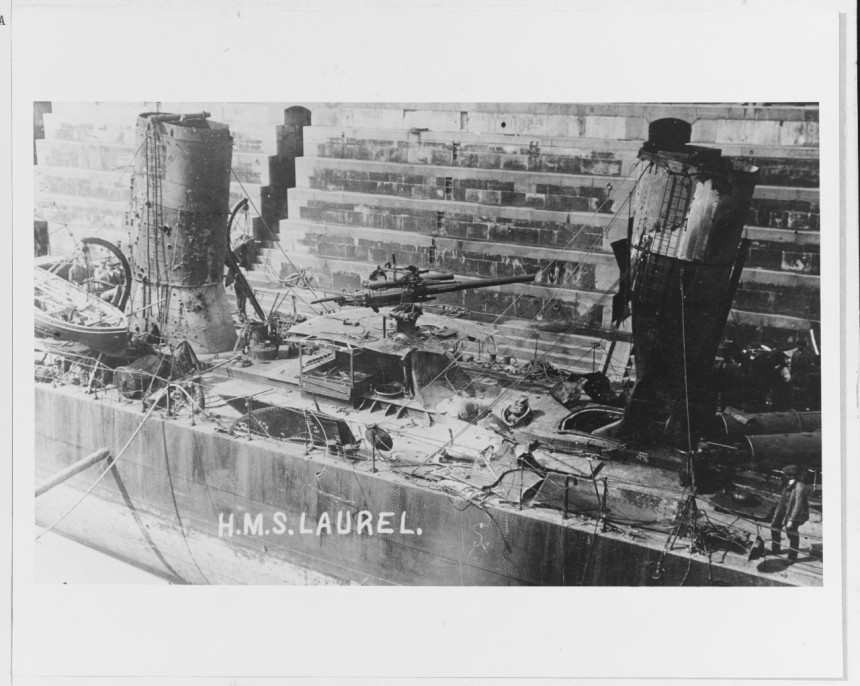 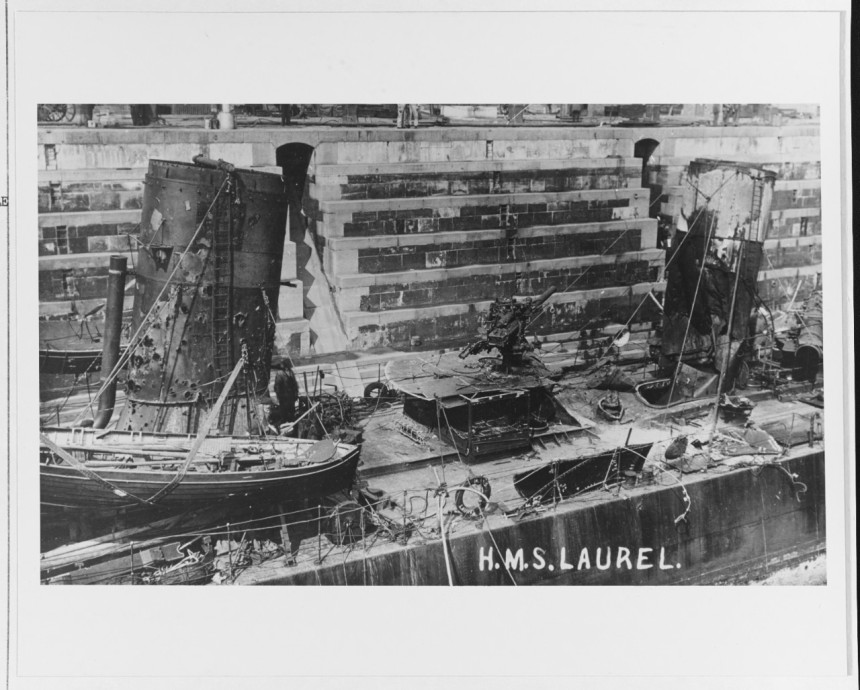 However, while the three L-class destroyers would eventually return to service, the German navy has never carried the name “Mainz” on its rolls again.

Sunk in relatively shallow water, her wreck is often visited– and plundered– by skin divers, a crime under the jurisdiction of German police. 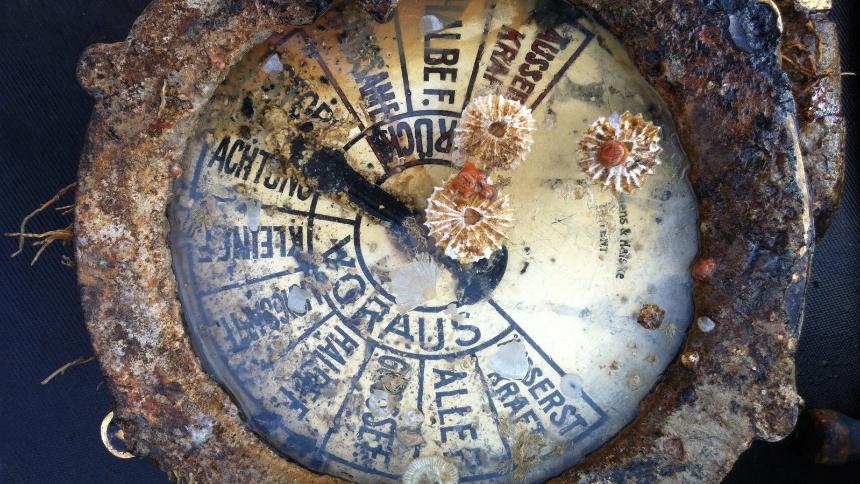 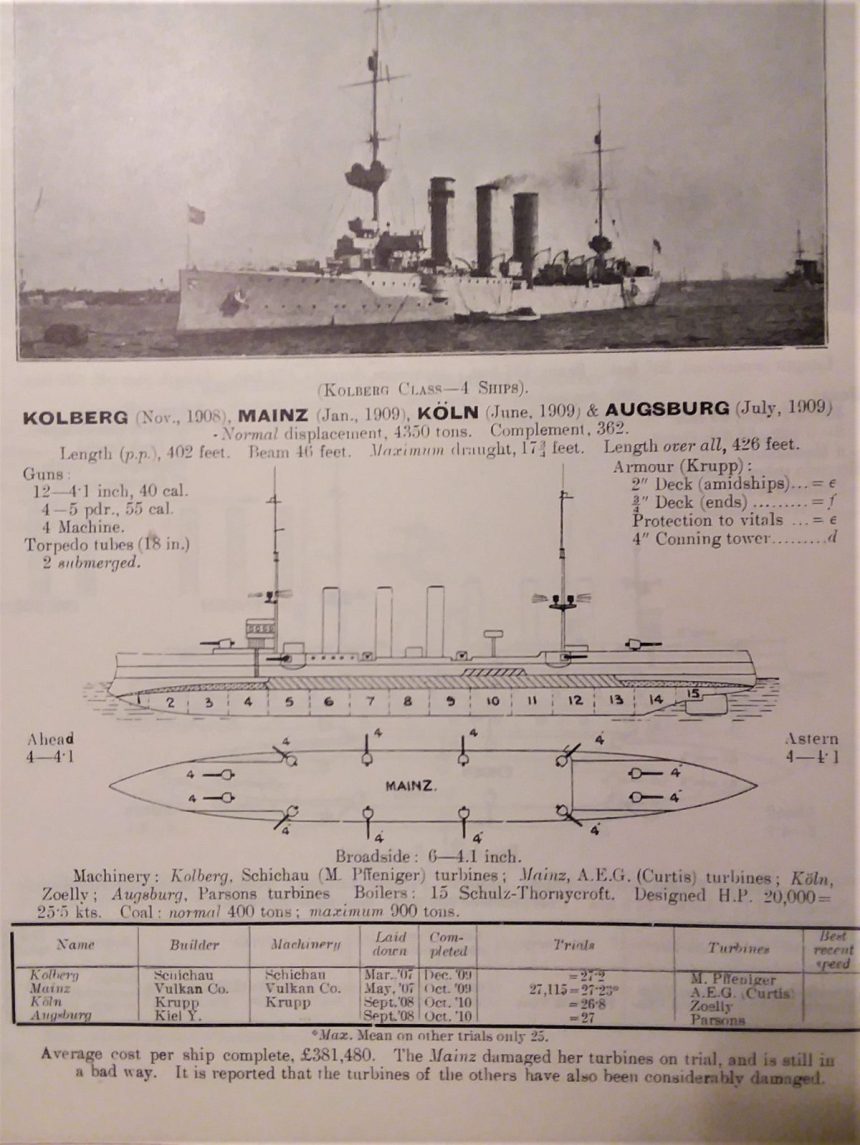