On 5 May 1942, the “Old Bird” Lapwing-class minesweeper USS Quail (AM-15) was the last surviving American vessel as the Japanese invaded the Philippines. [We covered her luckier sisters USS Avocet (AVP-4) and USS Heron (AM-10/AVP-2) in separate Warship Wednesdays a few years ago]

When Quail was disabled at Corregidor, site of the last stand of U.S. forces near the entrance to Manila Bay, LCDR J.H. Morrill had the ship scuttled and gave his crew the choice of surrendering to the Japanese or striking out across the open ocean. Seventeen sailors chose to join him on the desperate voyage. With the above pistol recovered from a dead serviceman as their only armament, and virtually no charts or navigational aids, they transversed 2,060 miles of ocean in a 36-foot open motor launch, reaching Australia after 29 days.

LCDR Morrill received the Navy Cross and eventually retired at the rank of Rear Admiral.

As noted by Navsource: “Although the Quail was lost, some of its crew decided that surrendering to the Japanese on Corregidor was not an option. Even though the odds against them were enormous, these incredibly brave men in their small boat managed to avoid Japanese aircraft and warships while, at the same time, battling the sea as well as the weather. But like so many of the men in the old U.S. Asiatic Fleet, they simply refused to give up. It was a remarkable achievement by a group of sailors who were determined to get back home so that they could live to fight another day.”

The gun is currently on display at the National Firearms Museum in Fairfax, VA.

Quail, U.S. Navy photo from the January 1986 edition of All Hands magazine, via Navsource

One of the Quail‘s “loaner officers” who didn’t make the trip south was Lt. Jimmy Crotty, USCG, who had a more tragic fate. 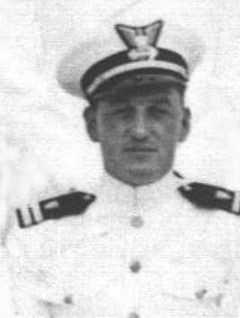 An explosives expert who graduated from the U.S. Coast Guard Academy in 1934 at the head of his class, he was serving with the Joint In-Shore Patrol Headquarters at Cavite when the war kicked off and spent several months on Quail working the minefields around Manila Bay.

When Quail was sunk, he volunteered to move to Corregidor where he served with the Navy’s headquarters staff and was captured while working one of the last 75mm guns with the 1st Battalion, 4th Marine Regiment. He died two months later under the unspeakably harsh conditions at Cabanatuan Prison Camp #1.

The USCGA Football team dedicated their 2014 season to Crotty and his Bronze Star and Purple Heart are in the custody of the Academy.

One of the 2,500 Allied POWs who died at Cabanatuan, Crotty was buried along with fellow prisoners in the Camp Cemetery, in grave number 312.

Following the war, American Graves Registration Service (AGRS) personnel exhumed those buried at the Cabanatuan cemetery and examined the remains in an attempt to identify them. Due to the circumstances of the deaths and burials, the extensive commingling, and the limited identification technologies of the time, all of the remains could not be identified. The unidentified remains were interred as “unknowns” in the present-day Manila American Cemetery and Memorial.

In January 2018, the “unknown” remains associated with Common Grave 312 were disinterred and sent to the DPAA laboratory for analysis, including one set, designated X-2858 Manila #2.