As a kid, I kept seeing the same cleft-chin rugged man’s man in my favorite war movies: Paths of Glory, In Harms Way, Cast a Giant Shadow, Is Paris Burning, Heroes of Telemark, Victory at Entebbe, The Final Countdown, et. al.

Playing a military man was something that Kirk Douglas found natural, as, prior to becoming a big Hollywood name, he volunteered for the Navy during WWII. Serving as a junior officer, minted through Notre Dame’s NROTC program, he served on subchasers including the PC-461-class boat PC-1139 as Communications Officer 18 November 1943 – 24 February 1944. He was later discharged due to medical issues. 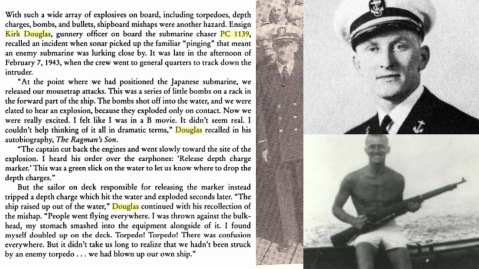 He would go on to play in more than 90 films, become a great humanitarian– donating most of his $80 million fortune to a variety of causes– and just be an overall Mensch.

Kirk Douglas passed away this week at 103.

One response to “So long, Kirk Douglas”