By the light of the full moon, 29 years ago today

“With the use of hand flares, USS Adroit (MSO-509) marks possible mines in an effort to extract the already damaged USS Princeton (GG-59) from a minefield. USS Beaufort (ATS-2) stands by to assist.” 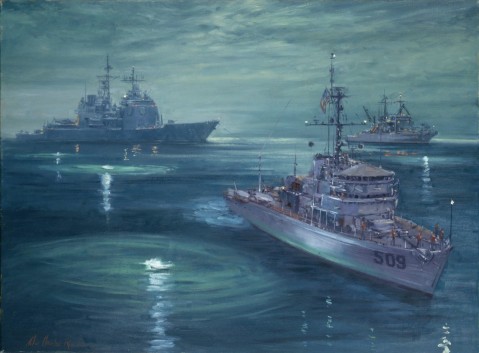 At about 0715 on 18 February 1991, Princeton was patrolling the Northern Persian Gulf off Failaka Island during Operation Desert Storm and set off not one but two Italian-made MN103 Manta bottom-mounted influence mines, buckling her hull in three places as well as locking her starboard propeller shaft and port rudder. Just three hours later, USS Tripoli (LPH 10), also struck a mine and was able to continue operations until relieved several days later.

Still, the 9,600-ton Princeton fared remarkably well for a ship that hit two mines and remained afloat, with her Aegis system coming back on-line 15 minutes later, allowing the cruiser to be nominally ready to defend herself if attacked and even project air cover for the range of her Standard missiles.

The Canadian destroyer HMCS Athabaskan (DDG 282) stood by to provide assistance while the Acme-class minesweeper Adroit moved in to lead the way out of the minefield after dark. The Iraqi minefield was later confirmed to hold more than 1,000 mines, many of advanced European designs.

Both Adroit and Athabaskan have been paid off and sold to the breakers while USS Beaufort (ATS-2) went on to a second career in South Korea, but Princeton remains very much in service.