Posted on March 6, 2020 by laststandonzombieisland 2 comments

On the early morning of 16 December 1914, the heavy cruiser Blucher, along with the battlecruisers Seydlitz and Moltke of Kaiser Wilhem’s High Seas Fleet closed offshore of the English seaside towns of Scarborough, Hartlepool, and West Hartlepool, firing at least 1,150 shells over a 40-minute period, killing 130 people and injuring over 500, almost all civilians.

It was the most significant attack on the British Home Isles since the Spanish Armada.

Fast forward to 2018, and a local historian stumbled upon something cool.

Mark Simmons, Hartlepool Borough Council’s Museums Curator, bought a box full of broken cameras and lenses for £20 at Tynemouth Market in 2018, thinking they might be useful for his personal projects.

“On getting home, I just took out a few useful pieces and put the rest in storage. It was only later that I got around to sorting through the entire contents. In the bottom of the box, wrapped in sheets of old grease-proof paper, was an old film reel and the title card on the first frames – The Attack on the Hartlepools – was just visible,” said Mark. 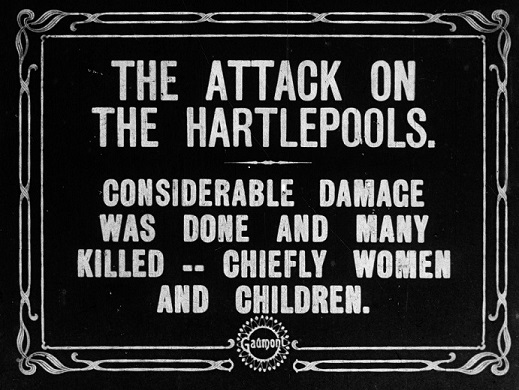 “The film is mostly a previously unseen version of the newsreel footage of the bombardment originally made by the Gaumont Company,” said Mark. “It is the best quality of any of the bombardment damage films but, crucially, contains a number of sections that have never been seen before, namely footage of Cleveland Street and the damage to houses at Carlton Terrace including a close up of local women and children.”

Simmons donated the film to the North East Film Archive (NEFA) who worked with the British Film Institute (BFI) to have the fragile Edwardian nitrate film digitized before being properly preserved and stored.

The full film, nearly six minutes in length, is on their website.