LCS to get Laser Zapper 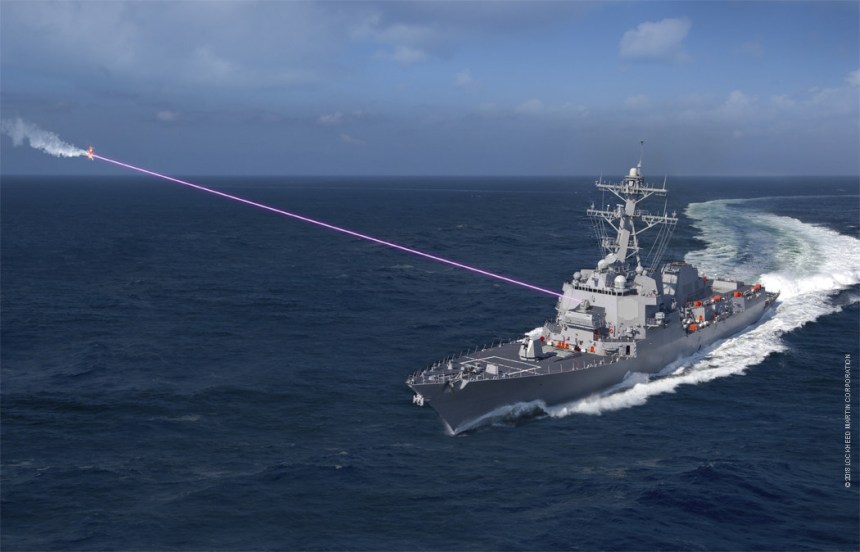 Artist’s rendering of Lockheed Martin’s HELIOS system. The company picked up a $150 million contract to develop it for the Navy in 2018 to include a high-energy laser system for use against drones and small boats, a long-range ISR capability, and a counter-UAS dazzler capability. The version company’s LLD for use on the LCS is undoubtedly smaller but likely with the same attributes. Credit: Lockheed Martin

Lockheed Martin Corp., Baltimore, Maryland, is awarded a $22,436,852 letter contract for the integration, demonstration, testing and operation of the Layered Laser Defense (LLD) weapon system prototype onboard a Navy littoral combat ship while that vessel is underway. Work will be performed in Moorestown, New Jersey (30%); Baltimore, Maryland (25%); Sunnyvale, California (12%); Woodinville, Washington (10%); Manassas, Virginia (5%); Dallas, Texas (15%); San Diego, California (2%); and Santa Cruz, California (1%). Key areas of work to be performed include development of a prototype structure and enclosure to protect the LLD from ships motion and maritime environment in a mission module format; system integration and test with government-furnished equipment; platform integration and system operational verification and test; systems engineering; test planning; data collection and analysis support; and operational demonstration. Work is expected to be complete by July 2021.

The total cumulative value of this contract is $22,436,852. The base period is $22,436,852 and no options are proposed. The action will be incrementally funded with an initial obligation of $11,218,426 utilizing fiscal 2019 research, development, and test and evaluation (Defense-wide) funds will expire at the end of the current fiscal year. This contract was competitively procured under N00014-20-S-B001, “Long Range Broad Agency Announcement (BAA) for Navy and Marine Corps Science & Technology.” Since proposals are received throughout the year under the long-range BAA, the number of proposals received in response to the solicitation is unknown. The Office of Naval Research, Arlington, Virginia, is the contracting activity (N00014-20-C-1003).

The radar track was provided to airmen who operated ATHENA via cues from the C2, then ATHENA’s beam director slewed, acquired, tracked and defeated the drone with a high-energy laser.

The ATHENA system shown here destroyed multiple drones in a real-world demonstration for the Air Force. Could it be coming to an LCS near you?