Posted on July 13, 2020 by laststandonzombieisland 2 comments

Commissioned in 1998, the Wasp-class gator carrier USS Bonhomme Richard (LHD-6)— the third ship to carry the name of John Paul Jones’ short-lived famous frigate, with the second being the hard-serving CV-31— has spent most of the past two years at Naval Base San Diego undergoing a long-term maintenance availability.

That availability is certainly to get much longer as she suffered, what seems from the outside anyway, to be a serious fire over the weekend.

“Currently there are two firefighting teams fighting the fire aboard the ship,” said Federal Fire San Diego Division Chief Rob Bondurant. “Federal Fire is rotating their crews aboard the ship with U.S. Navy firefighting crews from the waterfront to fight the fire in order to, find the seat of the fire and extinguish it. Also, Navy Region Southwest tugs are also continuously combatting the fire from the bay”

The origin of the fire is still unknown and is pending investigation.

Thus far seventeen Sailors and four civilians are being treated for non-life-threatening injuries at a local hospital. All crew members have been accounted for.

At approximately 1:00 p.m. the Arleigh Burke-class guided-missile destroyers USS Fitzgerald (DDG 62) and USS Russell (DDG 59) shifted berths to a pier further away from the fire.

Bonhomme Richard is in San Diego for a regularly scheduled maintenance availability.

More information will be released as it becomes available. 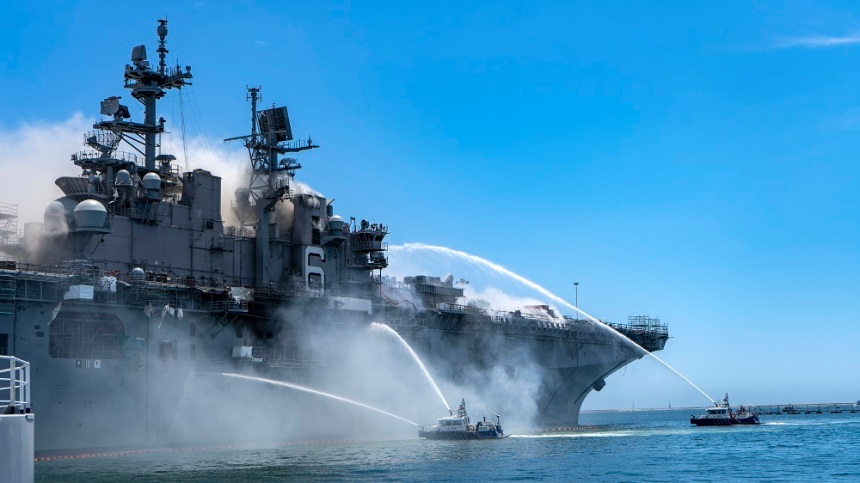 200712-N-BL599-1044 SAN DIEGO (July 12, 2020) Port of San Diego Harbor Police Department boats combats a fire onboard USS Bonhomme Richard (LHD 6) at Naval Base San Diego, July 12. On the morning of July 12, a fire was called away aboard the ship while it was moored pier side at Naval Base San Diego. Local, base and shipboard firefighters responded to the fire. USS Bonhomme Richard is going through a maintenance availability, which began in 2018. (U.S. Navy photo by Mass Communication Specialist 3rd Class Christina Ross)