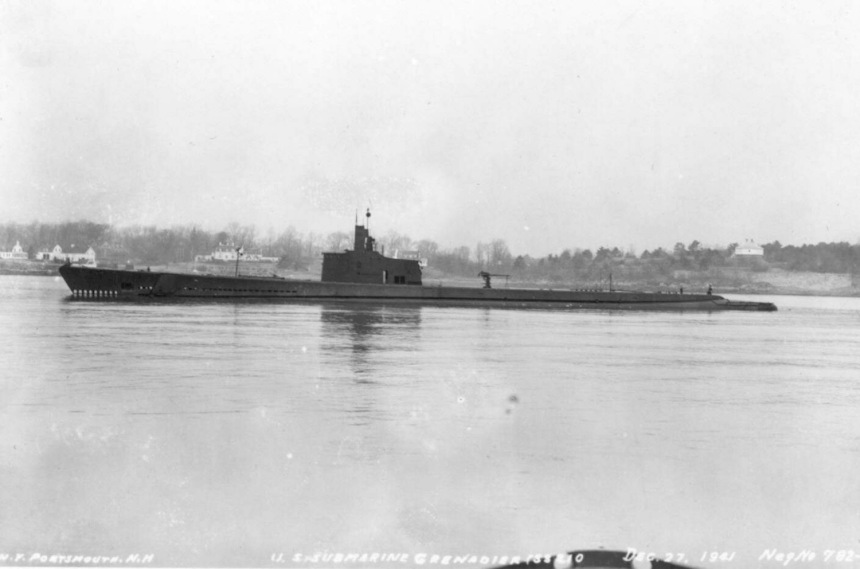 Commissioned 1 May 1941, the Gar/Tambor-class fleet boat USS Grenadier (SS-210) was only just past her East Coast shakedown cruise when the attack on Pearl Harbor put her on course for the immediate war patrols in the Pacific, the first of which she began on 4 February 1942– bound for Japanese home waters.

Over the course of six patrols, she drew a fair amount of blood from the Emperor’s supply lines, most important of which was the 15,000-ton Japanese Army transportTaiyō Maru (ex-Hamburg-America liner Cap Finisterre), sent to the bottom 120 nautical miles southwest of Kyushu with over 600 Japanese bureaucrats and technicians intended to run occupied the Dutch East Indies, as well as 2,500 tons of munitions.

In April 1943, while in the Straits of Malacca, Grenadier ran into trouble and became one of the 52 American submarines of WWII On Eternal Patrol.

Running on the surface at dawn 21 April, Grenadier spotted, and was simultaneously spotted by, a Japanese plane. As the sub crash-dived, her skipper, Comdr. John A. Fitzgerald commented “we ought to be safe now, as we are between 120 and 130 feet.” Just then, bombs rocked Grenadier and heeled her over 15 to 20 degrees. Power and lights failed completely and the fatally wounded ship settled to the bottom at 267 feet. She tried to make repairs while a fierce fire blazed in the maneuvering room.

After 13 hours of sweating it out on the ‘bottom Grenadier managed to surface after dark to clear the boat of smoke and inspect damage. The damage to her propulsion system was irreparable. Attempting to bring his ship close to shore so that the crew could scuttle her and escape into the jungle, Comdr. Fitzgerald even tried to jury-rig a sail. But the long night’s work proved futile. As dawn broke, 22 April, Grenadier’s weary crew sighted two Japanese ships heading for them. As the skipper “didn’t think it advisable to make a stationary dive in 280 feet of water without power,” the crew began burning confidential documents prior to abandoning ship. A Japanese plane attacked the stricken submarine; but Grenadier, though dead in the water and to all appearances helpless, blazed away with machine guns. She hit the plane on its second pass. As the damaged plane veered off, its torpedo landed about 200 yards from the boat and exploded.

Reluctantly opening all vents, Grenadier’s crew abandoned ship and watched her sink to her final resting place. A Japanese merchantman picked up 8 officers and 68 enlisted men and took them to Penang, Malay States, where they were questioned, beaten, and starved before being sent to other prison camps. They were then separated and transferred from camp to camp along the Malay Peninsula and finally to Japan. Throughout the war they suffered brutal, inhuman treatment, and their refusal to reveal military information both frustrated and angered their captors. First word that any had survived Grenadier reached Australia 27 November 1943. Despite the brutal and sadistic treatment, all but four of Grenadier’s crew survived their 2 years in Japanese hands to tell rescuing American forces of their boat’s last patrol and the courage and heroism of her skipper and crew.

The AP is reporting that Grenadier has been located at about 270 feet, some 92 miles south of Phuket, Thailand. It was discovered last year by Singapore-based Jean Luc Rivoire and Benoit Laborie of France, and Australian Lance Horowitz and Belgian Ben Reymenants, who live in Phuket, and recently identified with a high level of certainty. 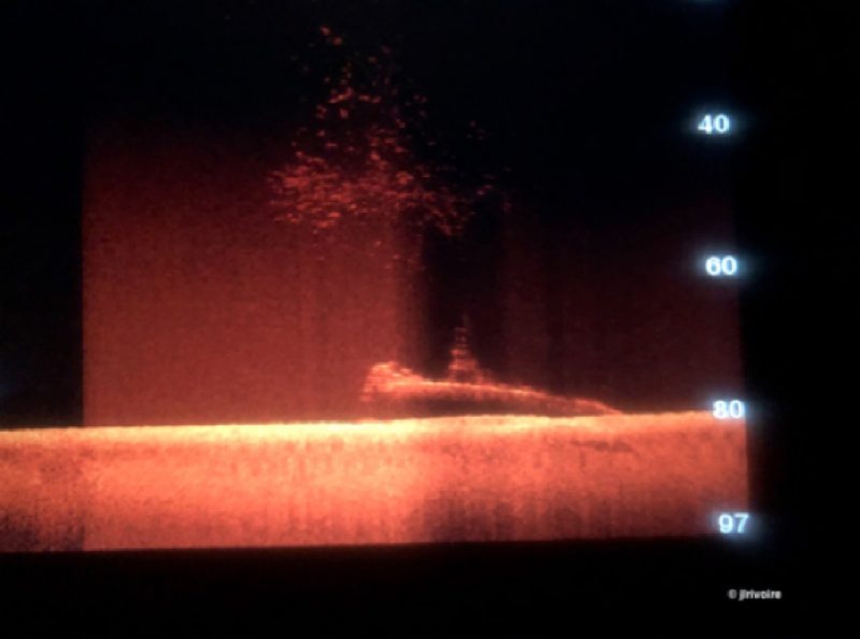 An image on a sonar screen shows a silhouette shape of a submarine lying on the ocean floor somewhere in the Strait of Malacca on 21 October 2019. The Grenadier (SS-210) lies in approximately 83 meters of water & identified with a probability of 95%. Photo courtesy of Jean Luc Rivoire, submitted by Steve Burton from the article written by Grant Peck of the Associated Press. via Navsource

Her 12-page war diary is in the National Archives in digital format.